Chris Ellerby Los Angeles Admin
February 2015 edited February 2015 in General
With the new Gary Tunnicliffe "Blood, Makeup & Gore FX" lesson now available on-demand, I thought this would be a good chance to discuss everyone's take on this classic staple of the effects world.

Lets talk blood!
I'm a big fan of the product "My Blood" which is pretty widely used for film and television.  I typically use their "Three Kings" formula, as I tend to like darker bloods. (even though they are less realistic as "fresh" blood)

The other blood I keep in my kit at all times is PPI's "Fleet Street"  Especially their drying blood, which looks fantastic.

At Son of Monsterpalooza this year I picked up some of PPI's Blood Works drying pastes, which I'm really looking forward to trying out.  Has anyone here ever used them?

That brings us to today's big question:
What fake bloods do you use?
And while we are on the topic of Gary Tunnicliffe, have any of you checked out his lesson "Blood Makeup Effects - The Throat Slash" ?

Immediately after watching that lesson I went out and built this fire-extinguisher based blood pumping rig. 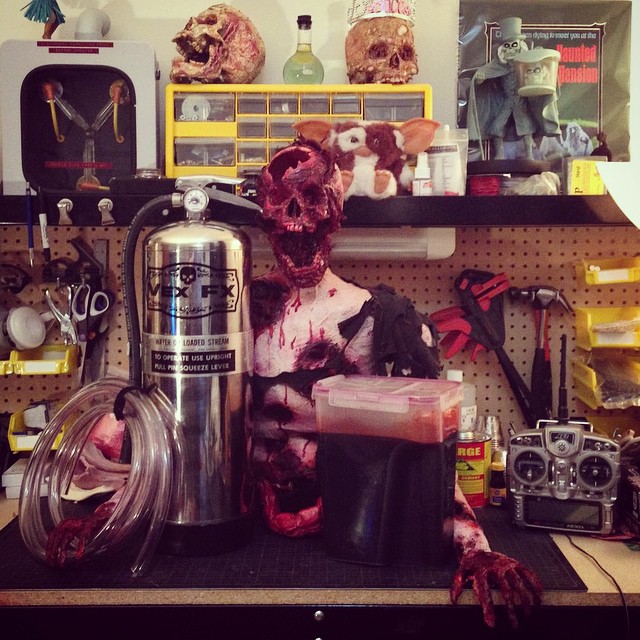 I removed the fire extinguisher's original "empty/full" indicator gage and replaced it with one that indicates PSI from 0 to 100.  This way I always know just how much power is at my disposal.  I also connected the main hose of the fire extinguisher to a spring-loaded quick-disconnect coupler, so I can easily disconnect any tubing and move around.

For lower viscosity pumping blood I use a mixture of water, Ben Nye's powder based blood pigment, and a bit of corn syrup to thicken it just enough to stick and drip slowly, but not so much that it becomes difficult to pump.  Anyone else here play with pumping/flowing bloods?