Christopher Addolorato ✭
December 2021 in Puppets
Here is my first attempt at a creature style puppet similar to Gremlins or Critters.
Count DeFahtass (That's DE FOT TOSS!!) A vampire who can't tell or remember if he's a croc or a gator. 400 years of not seeing a reflection of himself is the reason why. His look is inspired by Nosferatu, and his outfit is a mix of Nosferatu's coat, Christopher Lee's Dracula and Lon Chaney in London after Midnight.
I started with a Monster Clay sculpture, which I then made a silicone block mold of. The idea I had was to make a solid, one piece silicone mold (so it would be easier to cast) and pour expanding flexible foam in so I wouldn't have to do much carving aside from hollowing out the mouth/entry hole. I used Flex Foam it 6 from Smooth On. (I used Smooth on for the silicone too) Once the head was cast, I used a razor blade to carve out the mouth. I made the mouth plate out of plastic. I then used Creature Cast Rubber to create the skin. I wanted him to be entirely in Greyscale like he came right out of an old black and white movie with the only color being his Red eyes. His eyes light up via LED lights. I made the eyes in a clear resin mixed with white resin dye. This clouded up the resin enough so the red illuminates the eyes evenly. I sculpted the shape of the eyes using monster clay then made a mold of that.
His teeth and claws are plastic jack o Lantern teeth. I used contact cement to embed them into the mouth. His monnocle was a small jewelers magnifying lense that I had leftover from another project.
The claw was the most difficult aspect. (in fact I'm working on a new claw with a more comfortable mechanism and more in scale with the puppet.) I watched Richard Landon's  Hand Mechanism tutorial for inspiration. It functions pretty much the same. However since it was my first time making a hand mech, I could have made it better. The hand is a completley seperate object from the puppet by design so I can easily replace it.
Finally the costume/body was l200 foam rolled into a cylander, then covered in a black fabric. The collar was an old shirt collar covered in the same fabric to match. The buttons I got from a craft store as well as the material for the ascot. I tailored a long cape for him, long enough to drape over the claw. I plan to stitch in a button snap so when I have the final hand done I can have the cape not move off the arm.
The top hat is an old doll top hat I had in my box of puppet props. I'll have to find a way to temporarily attaching it.
I consider this my best puppet. Worked on this for over 2 months. I'm very proud of how he turned out!
Tutorials I used:
Shannon Shea's Garage Monsters 2
Richard Landon's Hand Mechanism mini Tutorial
as well as the Chiodo Bros work on Critters (the Crites were the main inspiration believe it or not!) 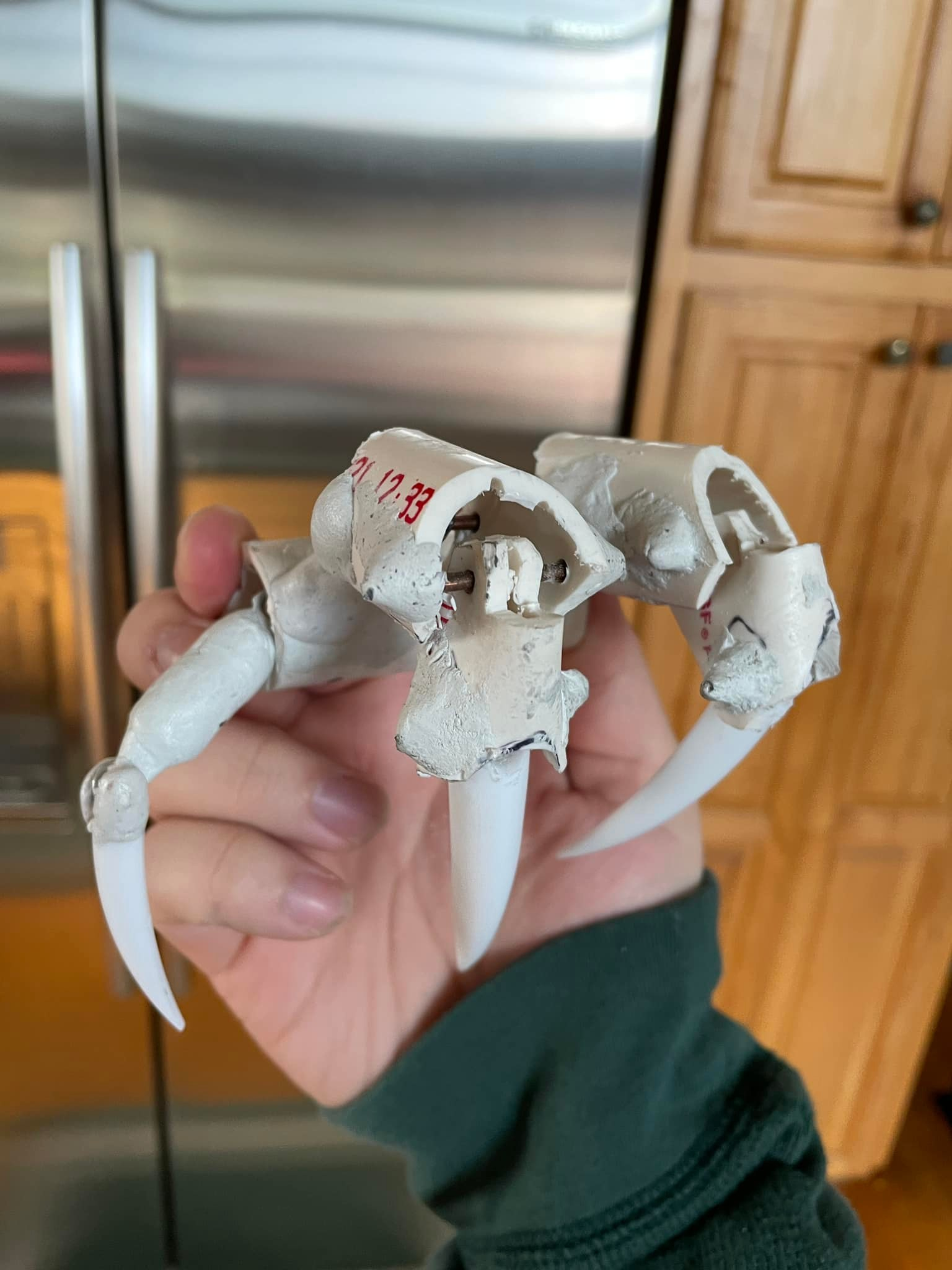 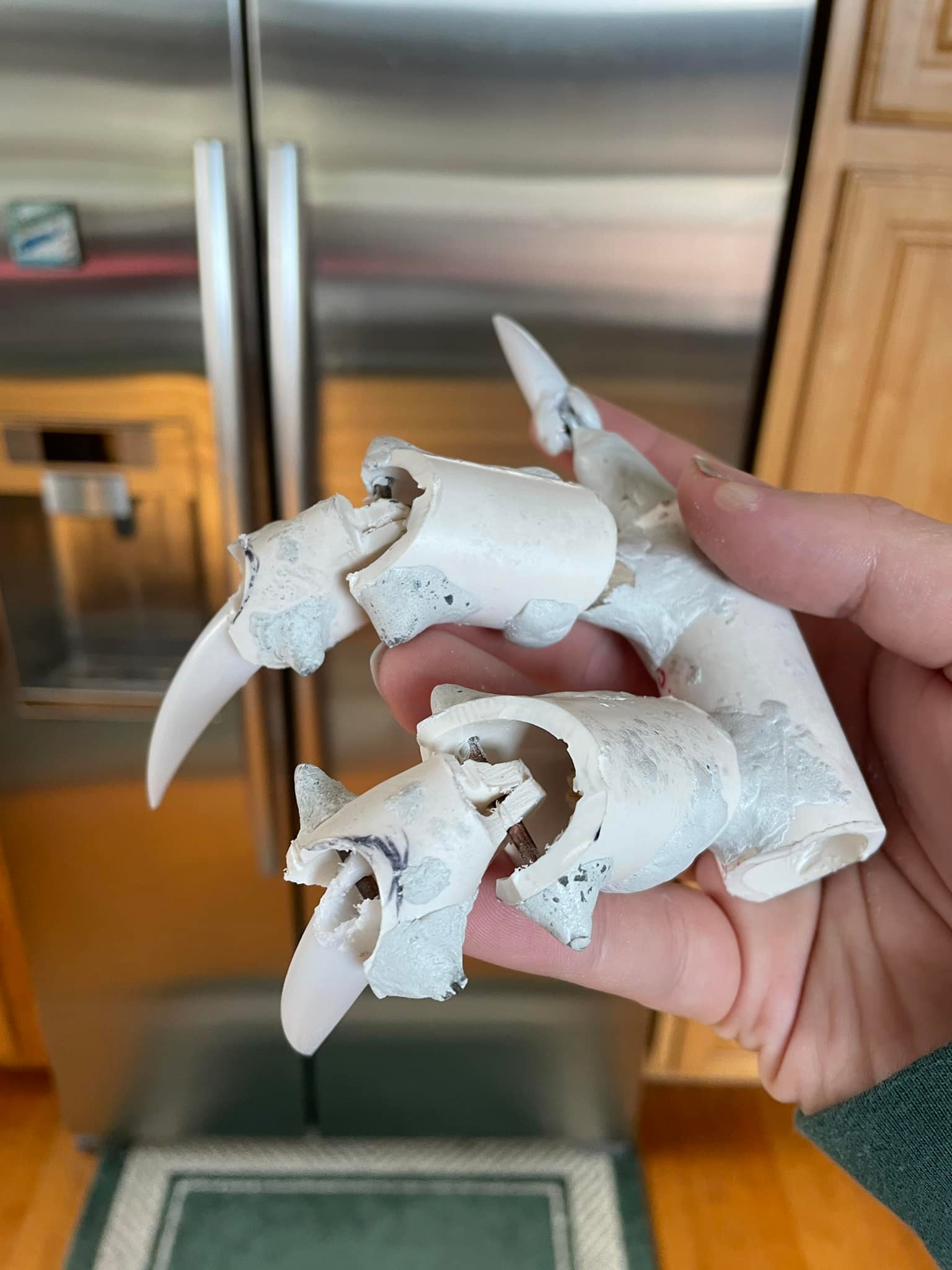 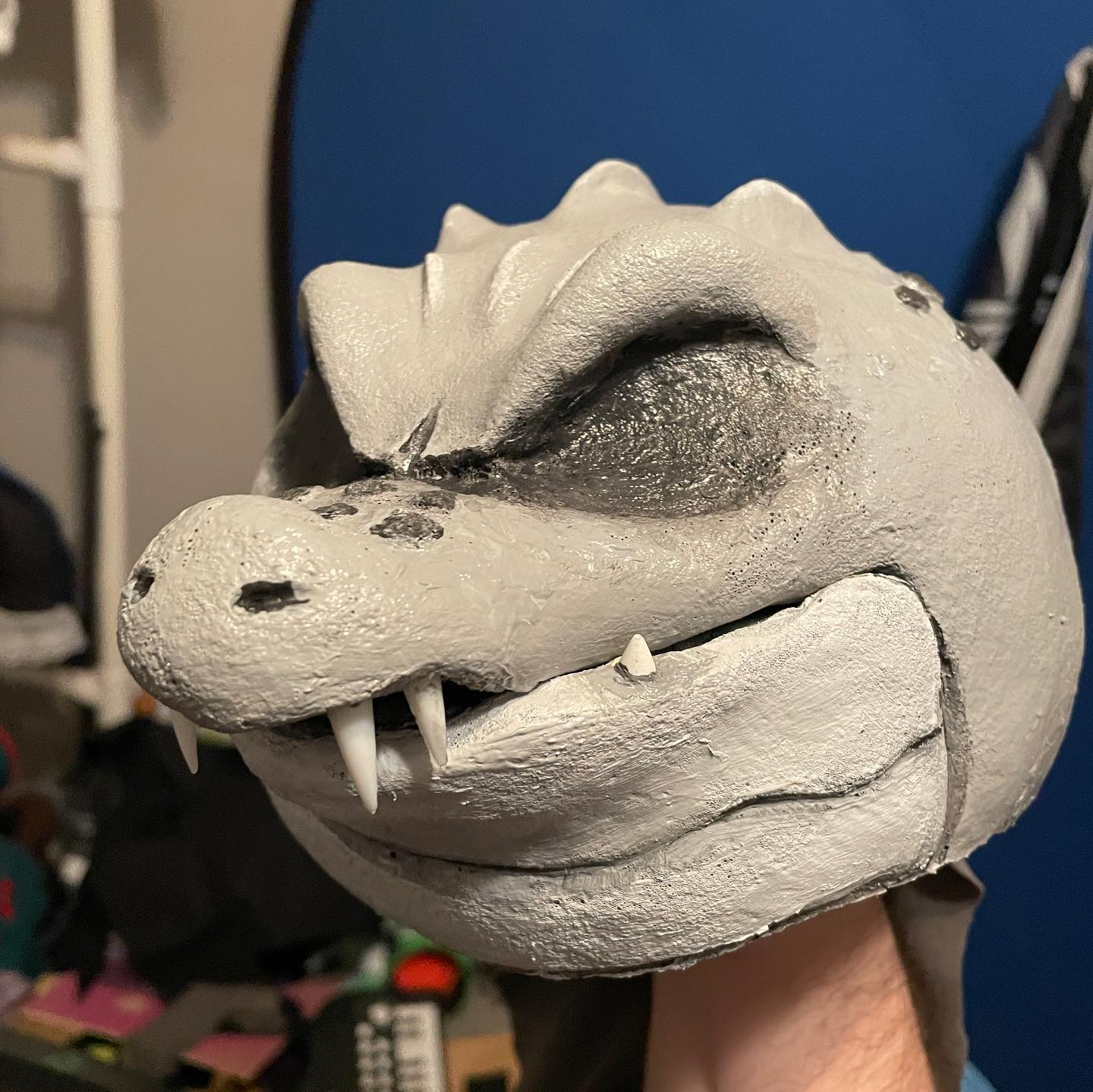 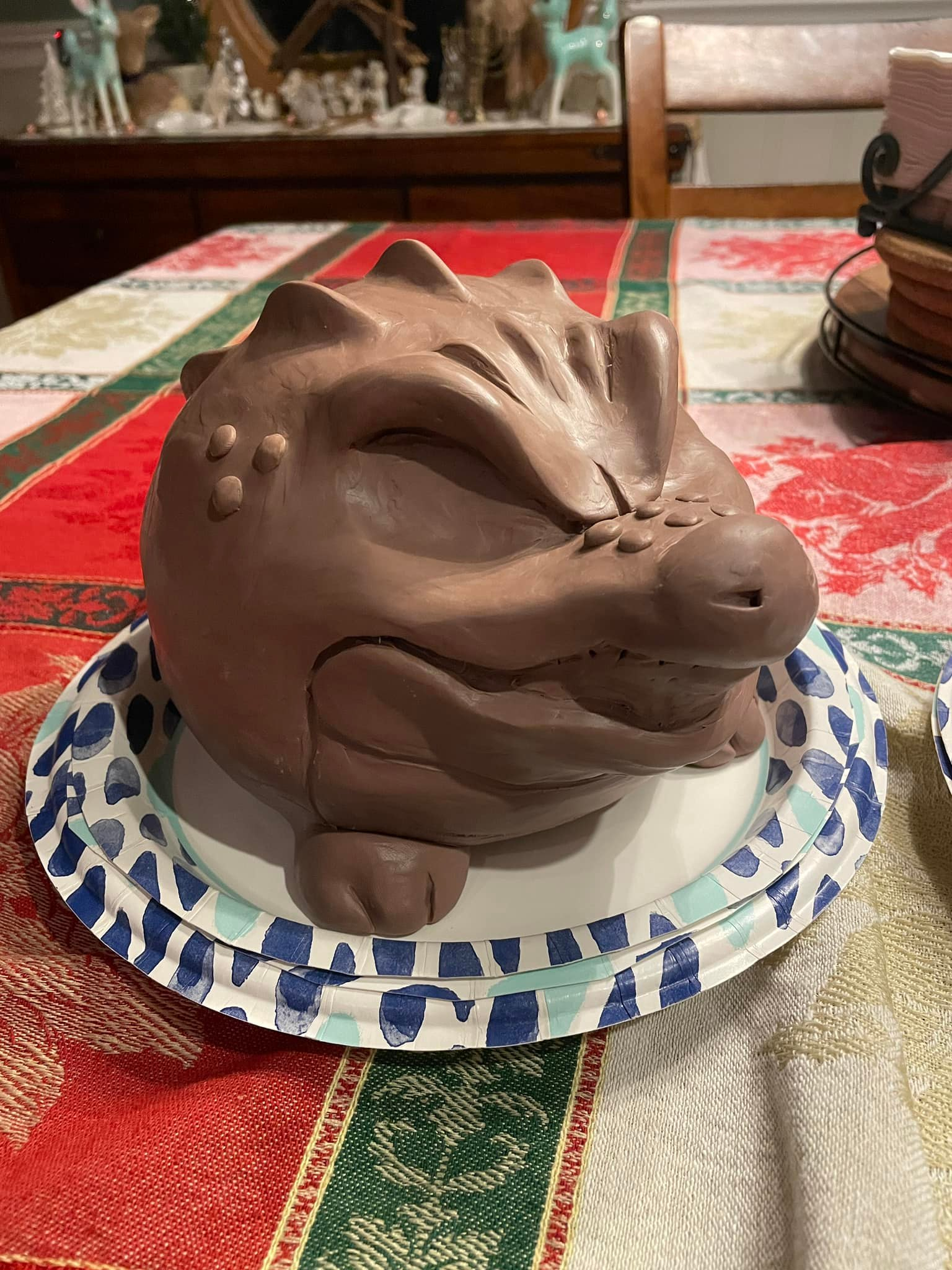 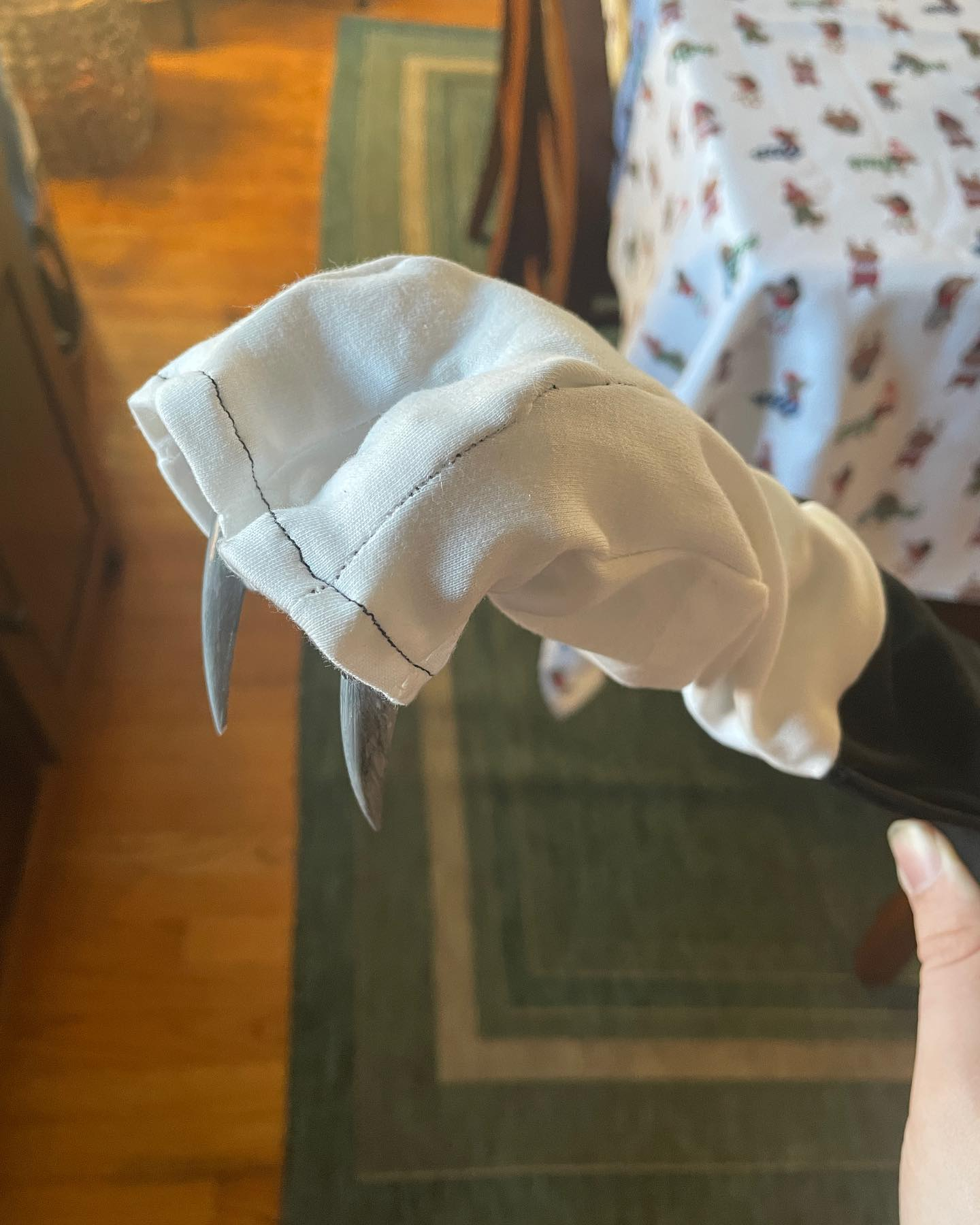 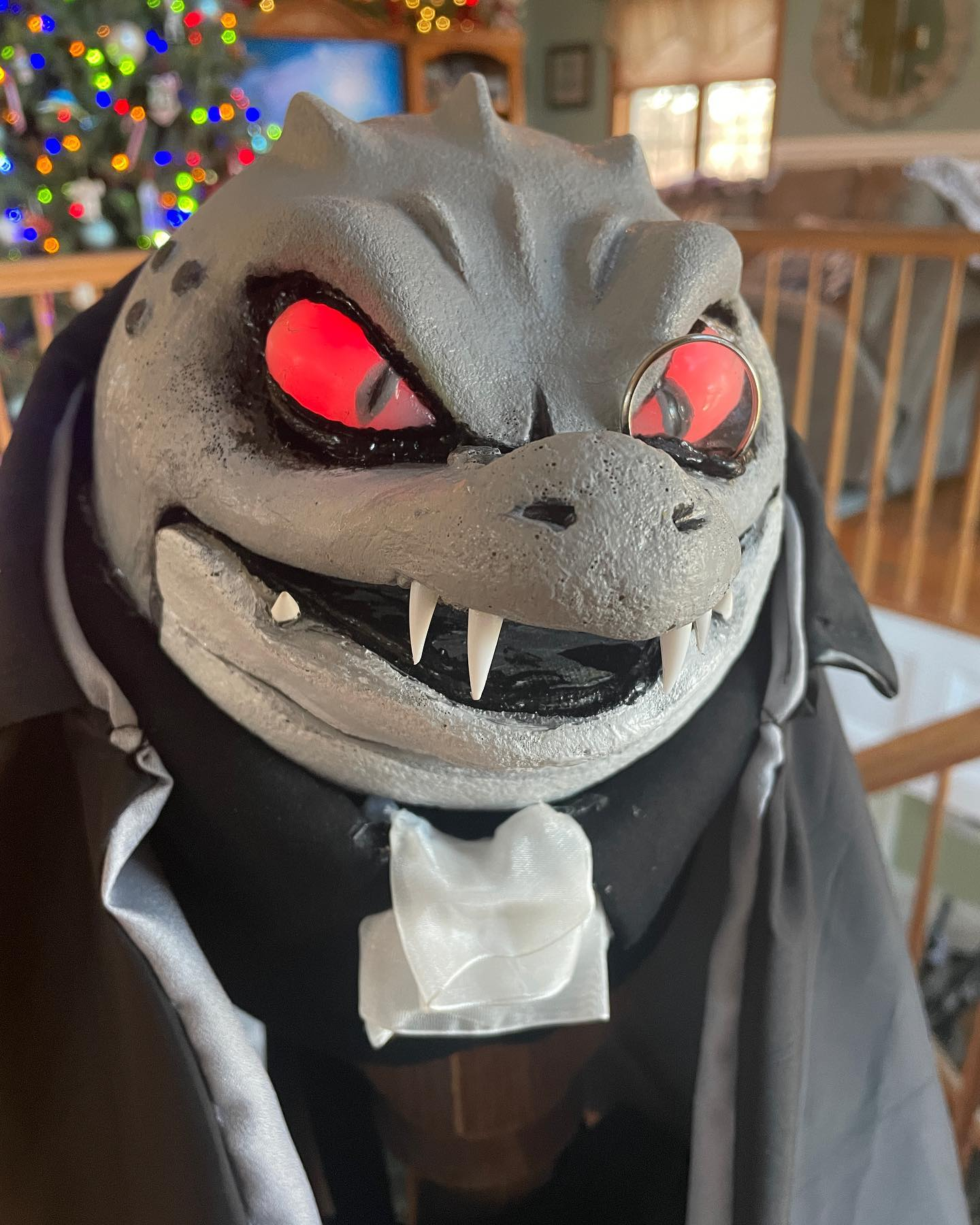 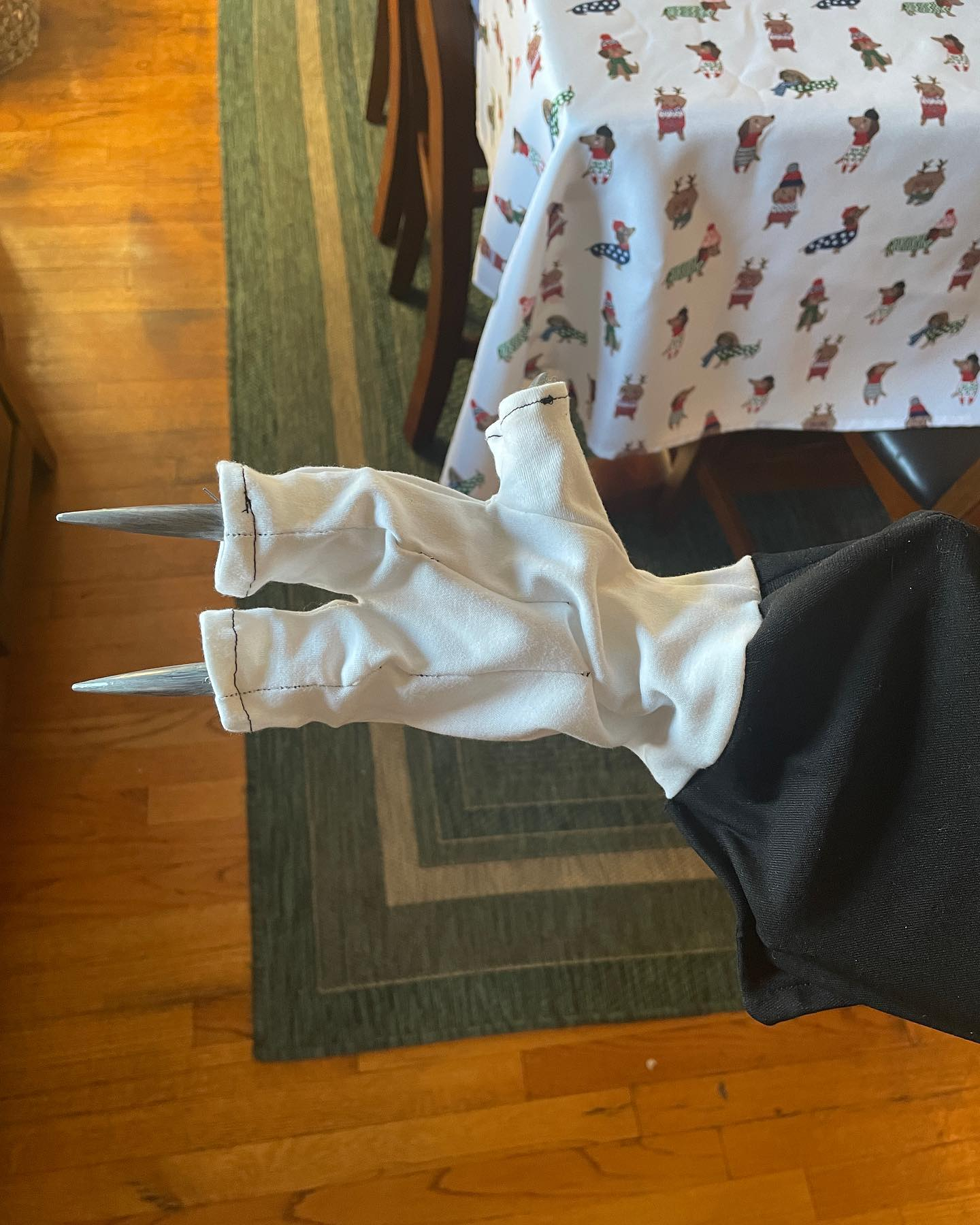 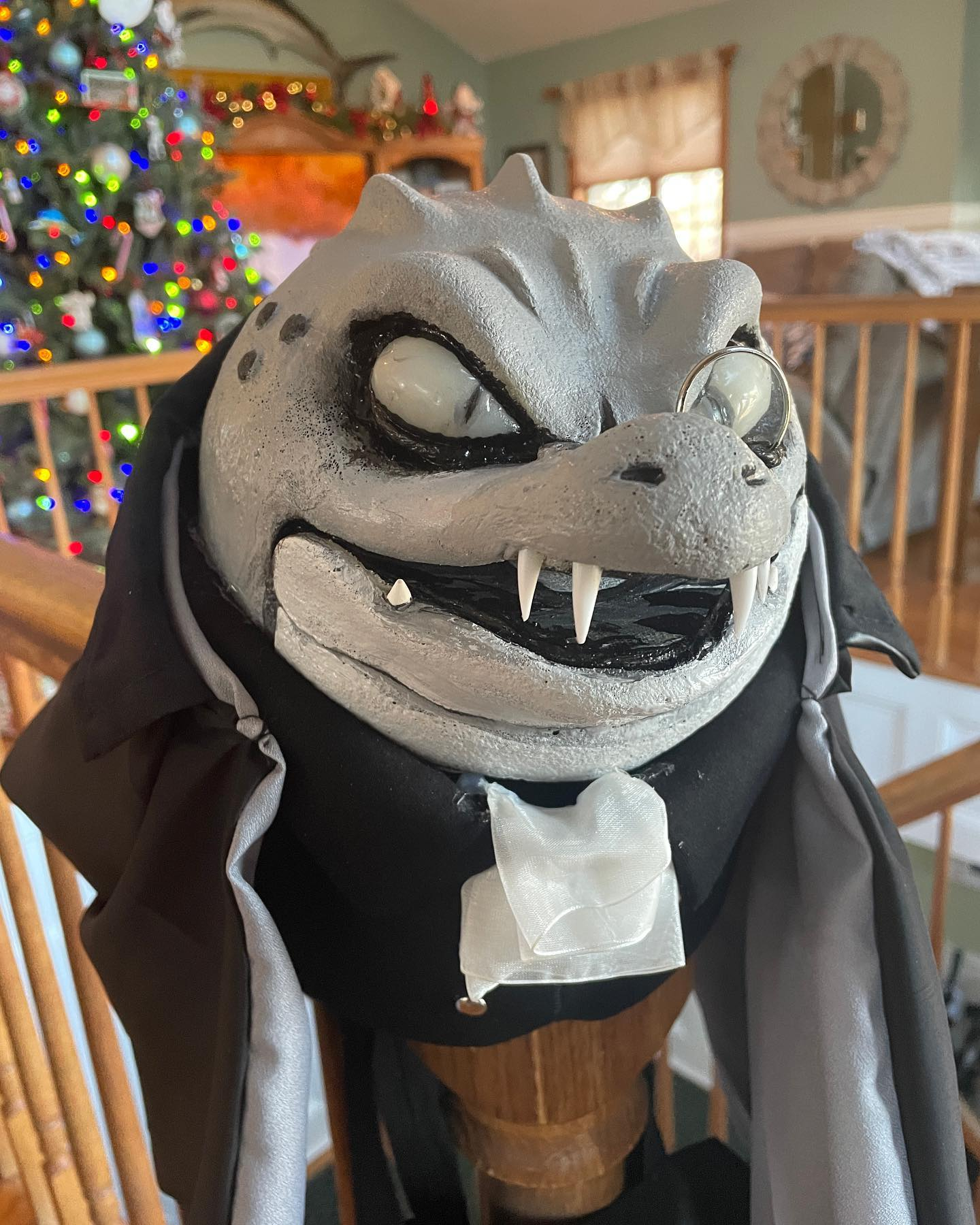 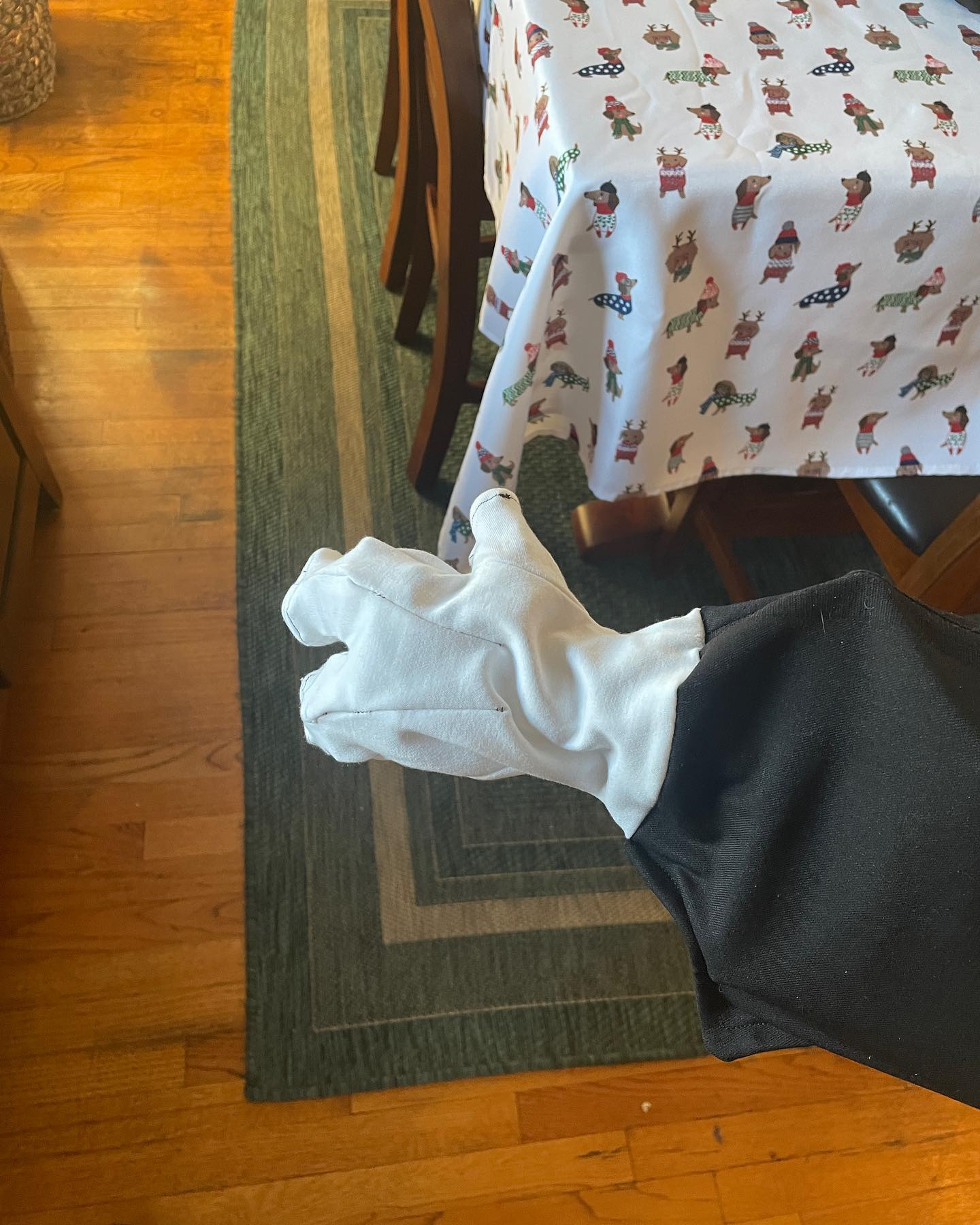 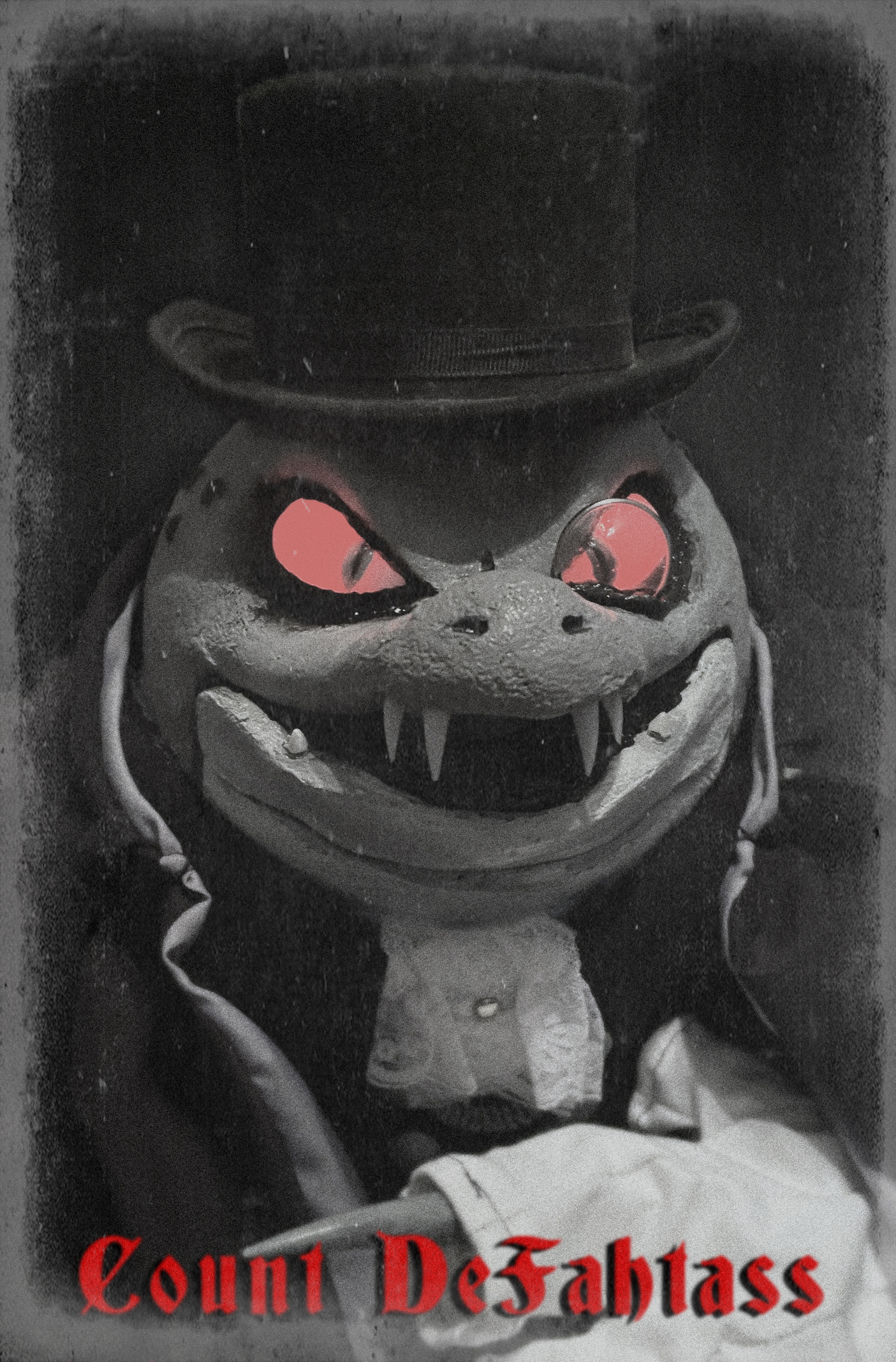