Escaron Sweden ✭
March 2021 in Creature Making Contest
Hello, my name is Linda aka Escaron. Im a sculptor, story writer and artdoll maker with a close connection to nature. I give form to the unseen,the spirits and beings in the different realms all around us, those which arent visible to the naked eye but still are there. And also those you really need to look closely to see - those who hide among us. I create them so that people can enjoy them, get inspired, see and feel the magic in this world and beyond it. This is my passion. And now I will introduce you to one of these creatures, one that live among us, are us, protect us and our world, the Elder Fox Guardian.


If you happen to wander into a old and untouched part of the woods where the trees are aged and gnarly and the vegetation grows thick you may catch a glimps of a sudden movement, only to find theres nothing there as you turn your head. You could have sworn you saw the dissapearing tail of a fox, or a flash of brown from a deers pelt, but the forest is very quiet and still around you, almost as if the trees themselves hold their breath. And yet the feeling wont go away, a distinct feeling of someone watching you all the while an image linger in the back of your mind, of something that goes against all logic and sense. Surely it was just an animal you saw, it couldnt have been anything else, still...
They bear many names and at the same time no name at all. They are guardians, protectors, animal, nature and human born into one. Back in the days when human tribes lived in harmony with nature and wildlife these beings were quite known, for they were created by the very same humans, and they called them Elder Guardians.

When a tribes elder was about to pass on into the afterlife they could instead decide to stay, to reincarnate. As they breathed their last the other members would perform a sacred ritual, a pact with the realm of spirits and with Gaia, the mother earth. The elder was marked with the rune of Elhaz/Algiz* painted upon their forhead and together with sacred ropes and a sacrificed animal (the tribes totem) the elders head was then burried in a groove under a special tree, (the tribe spirit tree). And after three full moons passing the tribes Elder Guardian would awaken - human, animal and natures soul perfectly harmonized into one single being, immortal and there to forever watch over and protect the people and nature alike.

This particular Elder Fox Guardian may look somewhat scary, but believe me he is anything but. He is old, he is wise and he is protective of every soul alike. His past self skull with the rune of Elhaz/Algiz sharp upon his frontal lobe hang inside his crown of sacred branches, his past self face intertwined with the face of the fox, giving him perfect vision and senses. The twigs and brances growing from the fox body move by his command and works as both extra limbs, protection and camoflauge, and if you look closely you can see the memory of his past identity in the shape of the wood, a skeletal human looking form.
The Elder Fox Guardian is a perfect sync of souls and life in harmony and he will keep watch over this world and all its life together with his breatheren, the other Elder Guardians of various animal, nature and human joinings.
So If you ever walk through the forest, maybe feeling a little lost, and catch a glimps of something that isnt quite animal, if you ever feel eyes upon you, dont be afraid. If a Elder Guardian is watching you, you are safe, as well as a truly lucky fella.

(**Elhaz/Algiz rune come from the Elder Futhark runic alphabet and stand for protection, connection to the divine, wisdom and merging with nature among other things. Search for it of you want to know more.)

The Elder Fox Guardian is completely handmade by me. His head, paws, the human skull and the braches (resembling a human skeleton over his back) are all hand sculpted, everything in super sculpey except the branches that are made in cosclay (so they are bendable and can be moved). I made a mold and casted the fox head in resin for durability and attached every piece to a skeleton/frame I made in thick wire. The skeleton was then filled out with batting to make the fox body. I painted all the clay parts in acrylics, glossed the eyes and varnished them. I also used model fibres to make the mossy parts on the branches. Then I hand dyed fauxfur and attached to the fox body, I shaped, trimmed and cut it to get the shaped I wanted. Lastly I made the ropes with lots of yarn, wire and small wooden beads I painted, drilled holes in the human skull and finally attached everything togheter. The Elder Fox Guardian is completely posable, he can bend all his legs, tail. neck and even the branches.The rope can also be adjustable (and removed). I have made artdolls before but never anything as complex as this, I tried a lot of new things and methods. Im really happy with both him and the lore I wrote. 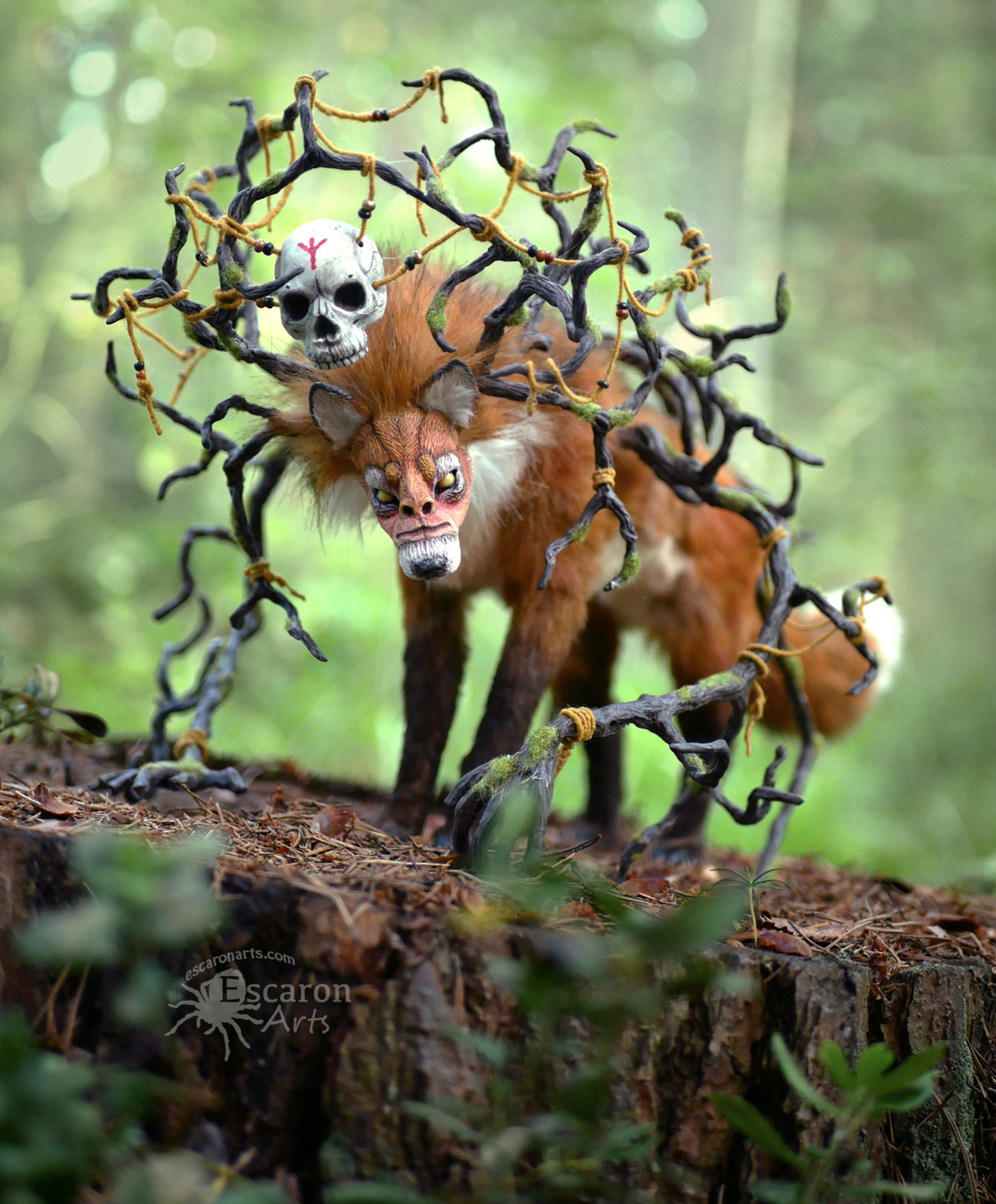 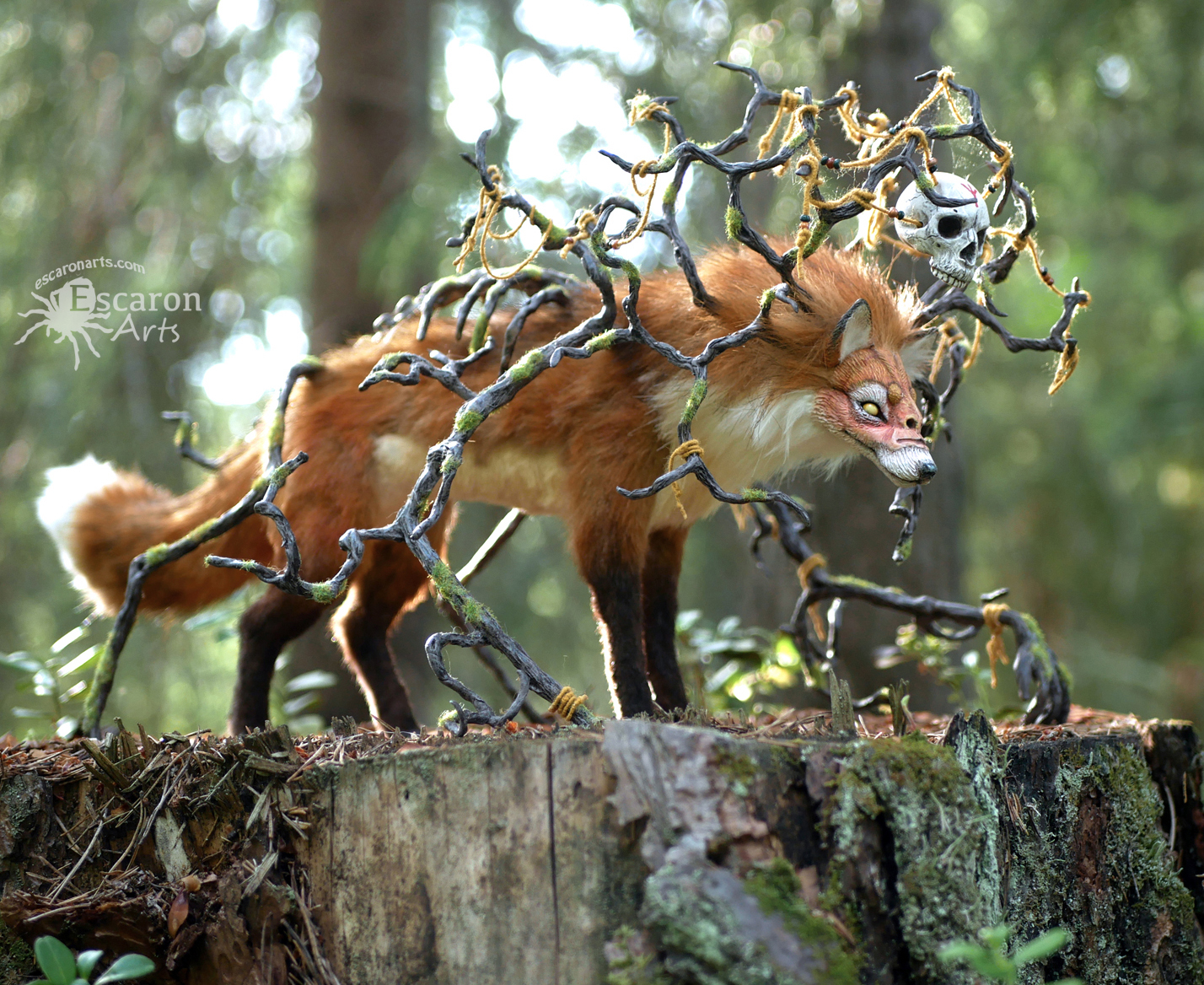 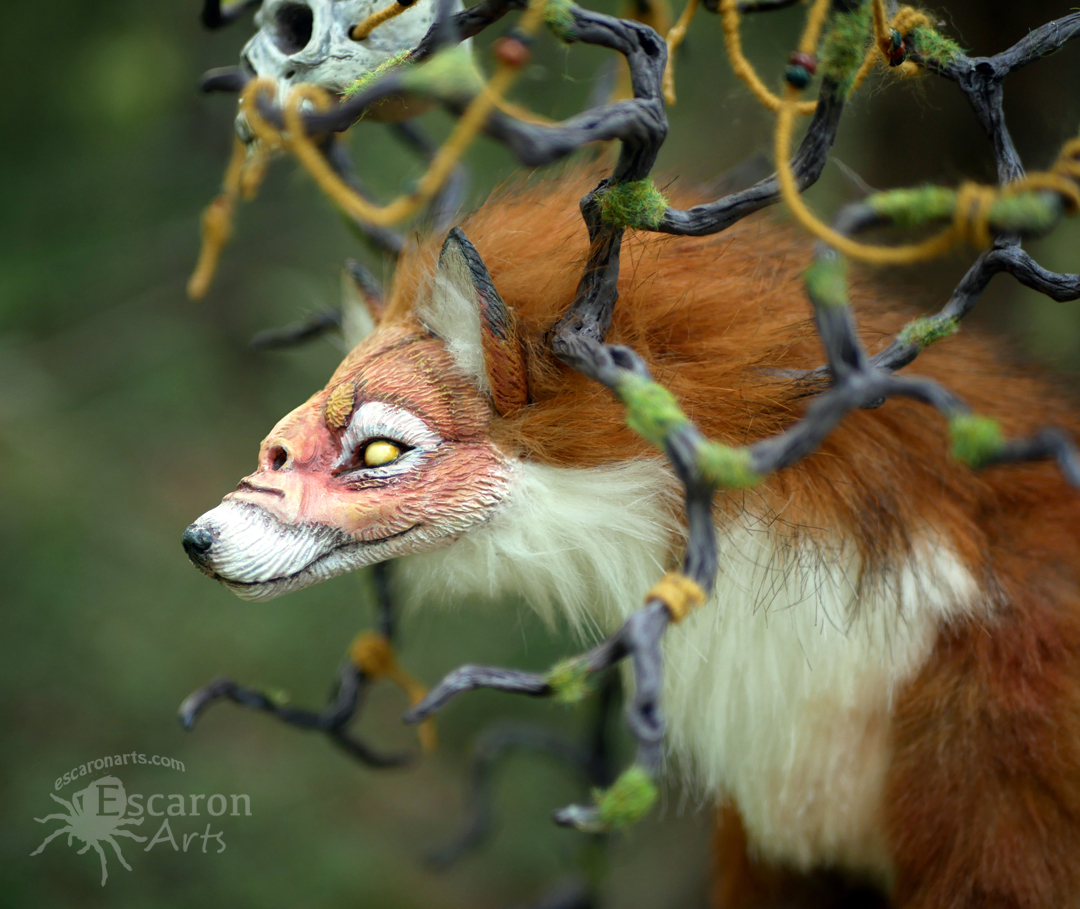 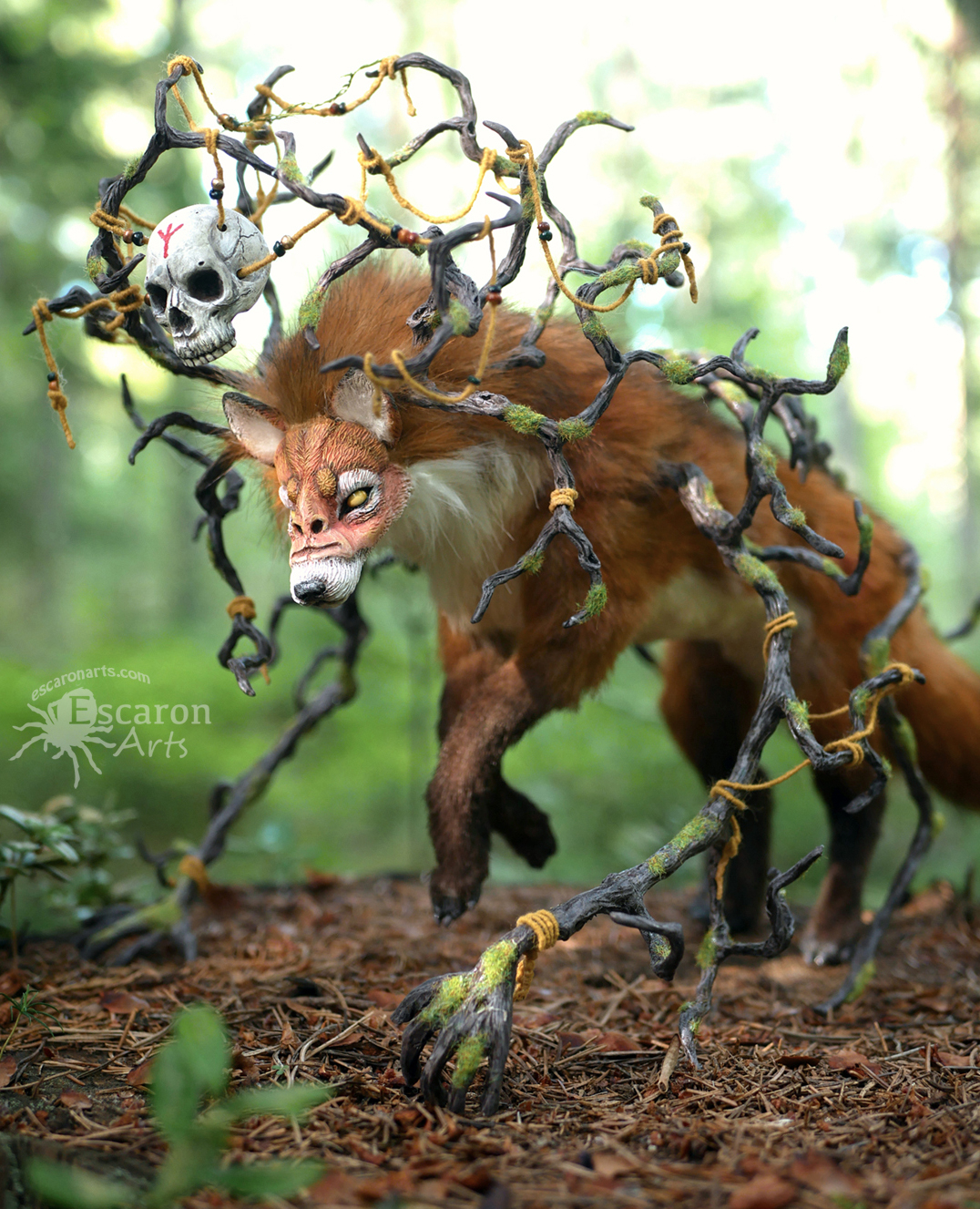 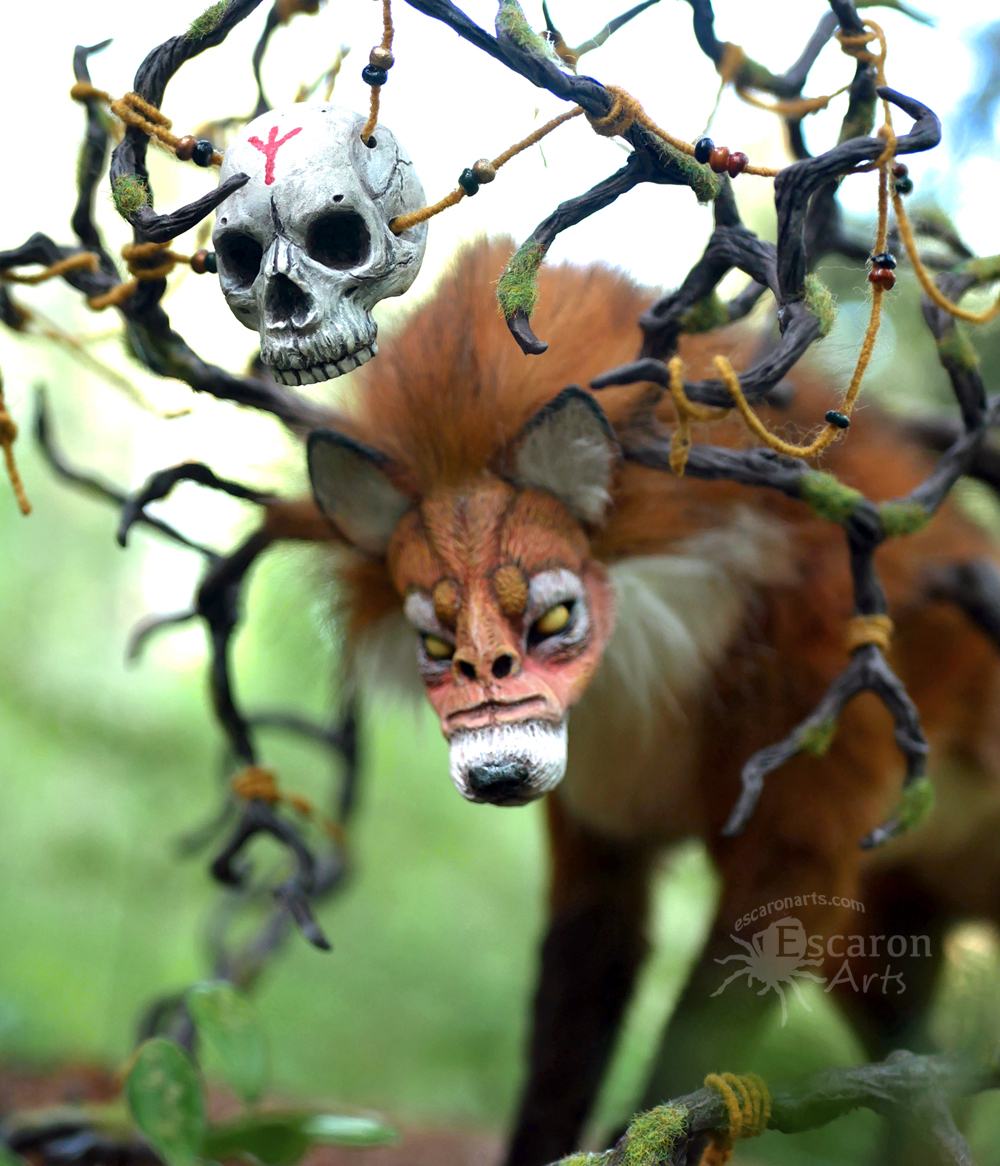 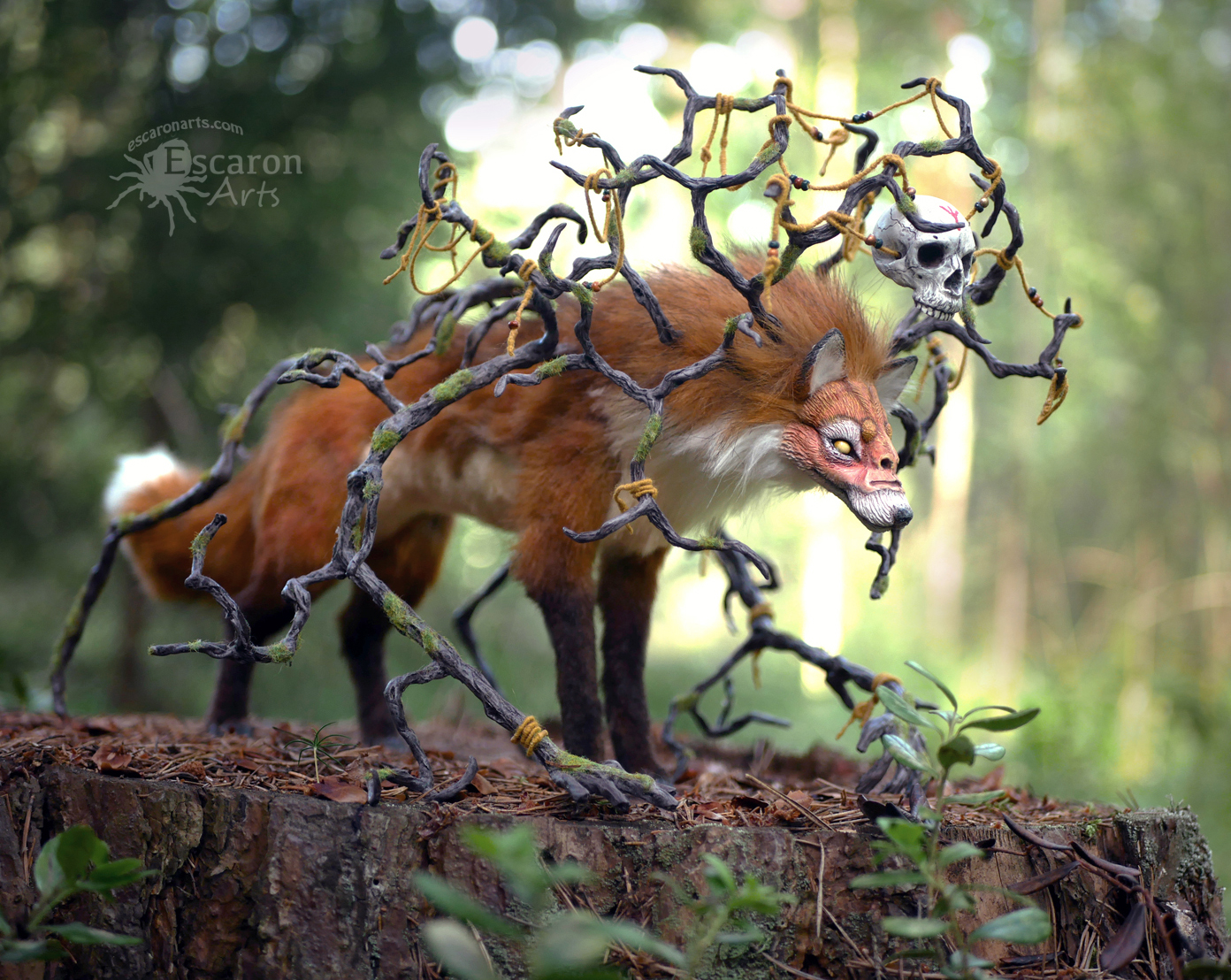 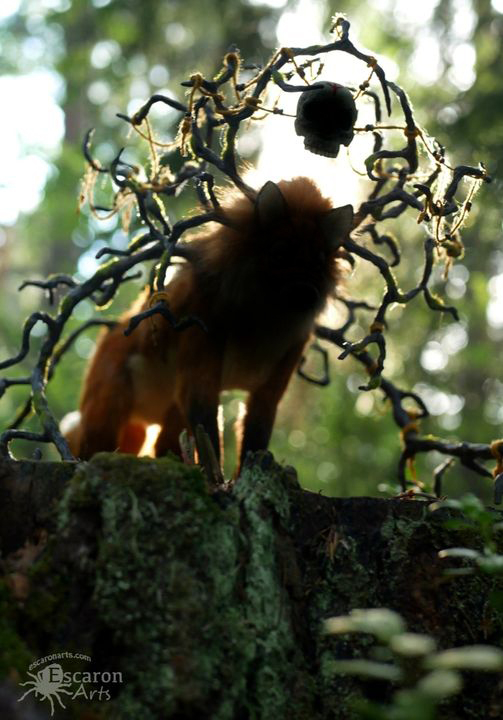 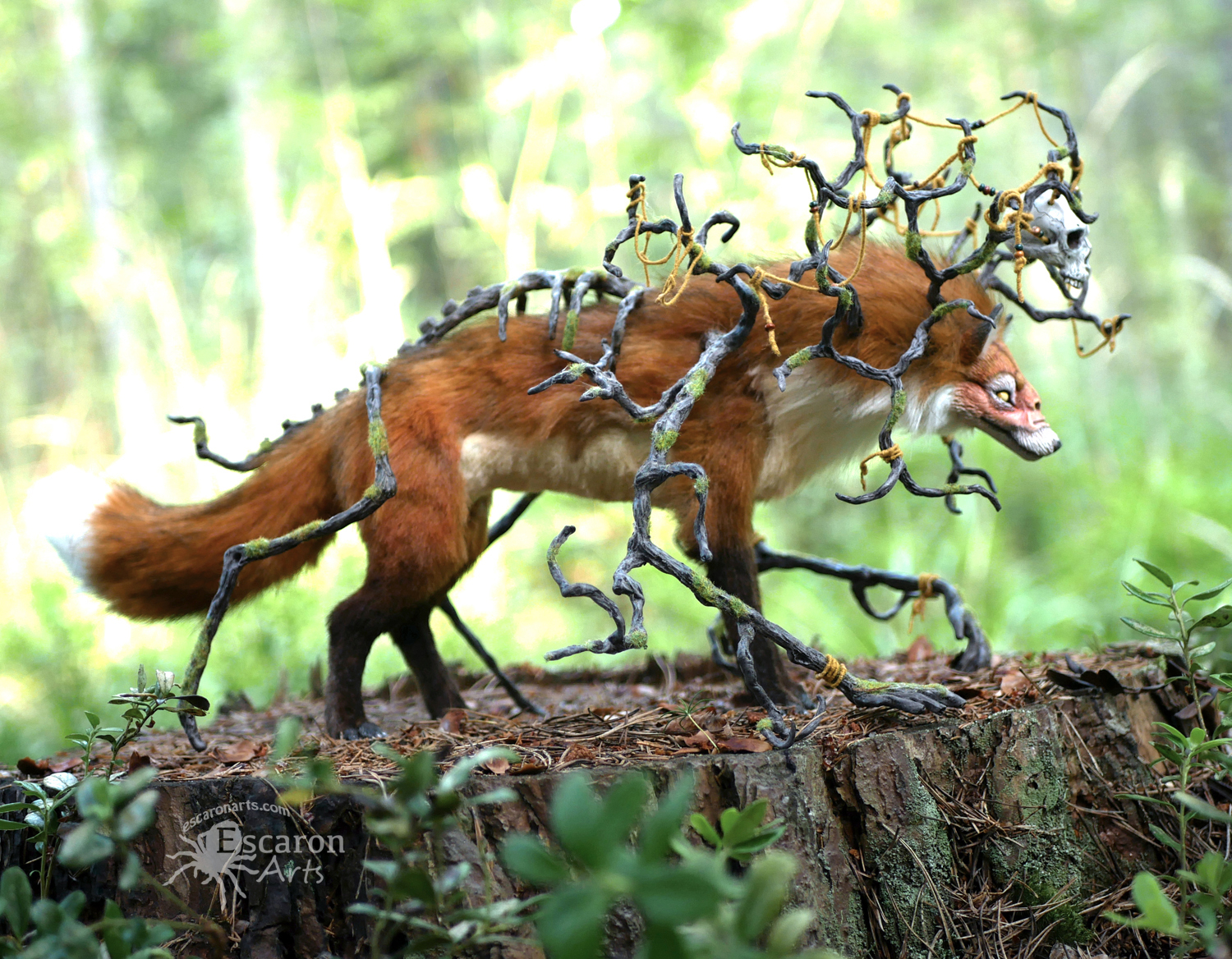 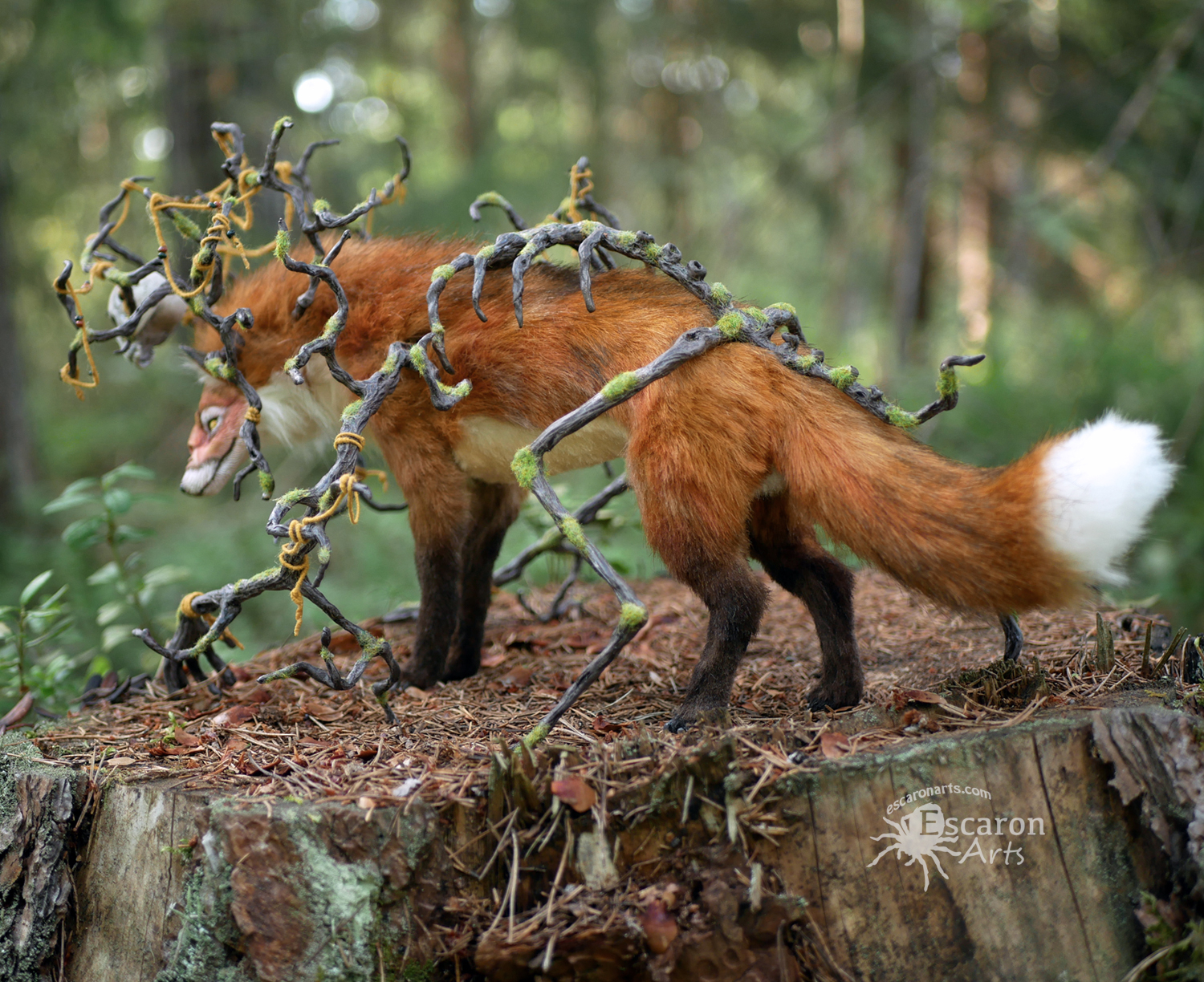 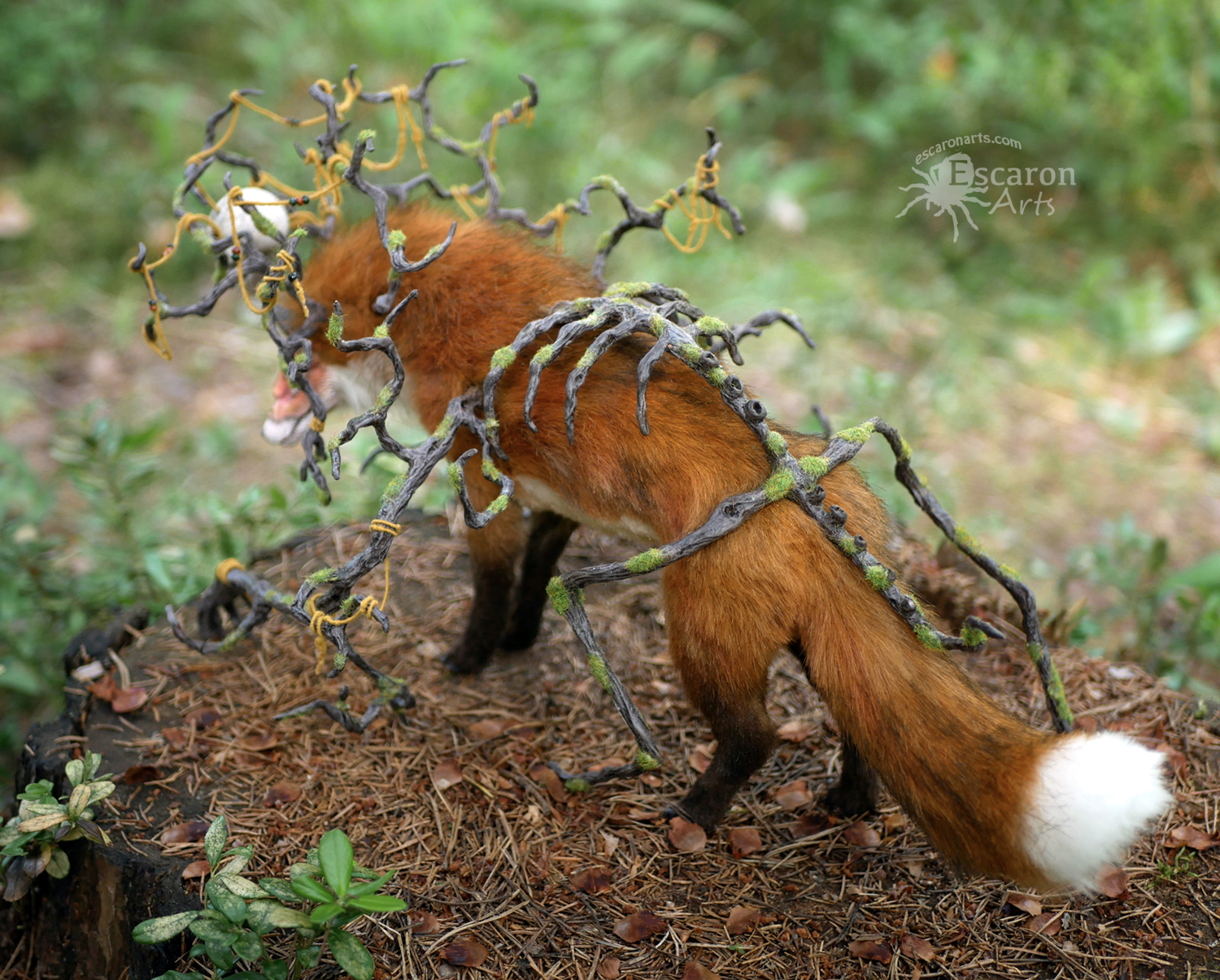