For the last few years, I have made my own costume. I like to bring an original twist on any basic theme, such as a mermaid. This year I decided to be a witch doctor. I Googled a lot of witch doctor themes, and many times Diablo 3 kept coming up. I also looked for African witch doctors and witch doctor costumes. This way I have a little bit of a platform to start. First thing I purchased was African impala skull plate with horns from EBay.

Next. I had to brainstorm my headpiece. I wanted big horns, a skull somewhere, and feather to keep it organic. For the horns: I made two horn shapes by balling and twisting newspaper. I then wrapped it is some floral wire to create ridges. I made a flour-water solution and paper mached them and sat them outside to dry for a day. Once dry I hollowed out the horns by removing the paper I made the shapes with. I then used ripped up old sheet and dipped each piece in Elmer's Glue-all and sat them outside to dray for two days. For the skull: same process as the horns. After they were both dry, I painted the horns black and the skull bronze. I cut various places on the skull to produce decay, and added glitter to the horns. For the skull cap: I cut a soccer ball to the shape desired, zip tied a rigid headband to the inside. I pained the outside purple, and covered it with black sequin fabric. For the plumes. I got on EBay and bought bundle of pheasant and rooster feathers in different colors and lengths. I then glued them from longest to shortest on a rounded piece of cardboard that was zip tied to the skull cap. I zip tied the skull to the front of the plumes and covered the back with black feathers. The horns were zip tied to the skull plate. I then cut and glued a plastic skull cap (EBay) underneath to cover the inside, and covered that with black fabric.

The staff is 3 pieces of PVC pipe, 3 couples and two tee attachments. I painted the impala horns black, the skull plate white, added some rhinestones, and zip tied it to the PVC pipe tee using two drilled holes in the pipe and preexisting holes in the scull. I then attached a flat piece of wood above the horns and velcroed a battery powered plasma ball to the top. I hid all the unsightly parts with black sequin fabric.

The Dress: I used an old fitted maxi dress, cut the sleeves off, added leg wraps to the arm and tied them down my arm. The bottom of the dress was eight yards of rooster feather trim in brown, orange and white (EBay and Aliexpress) that was sewed into place. 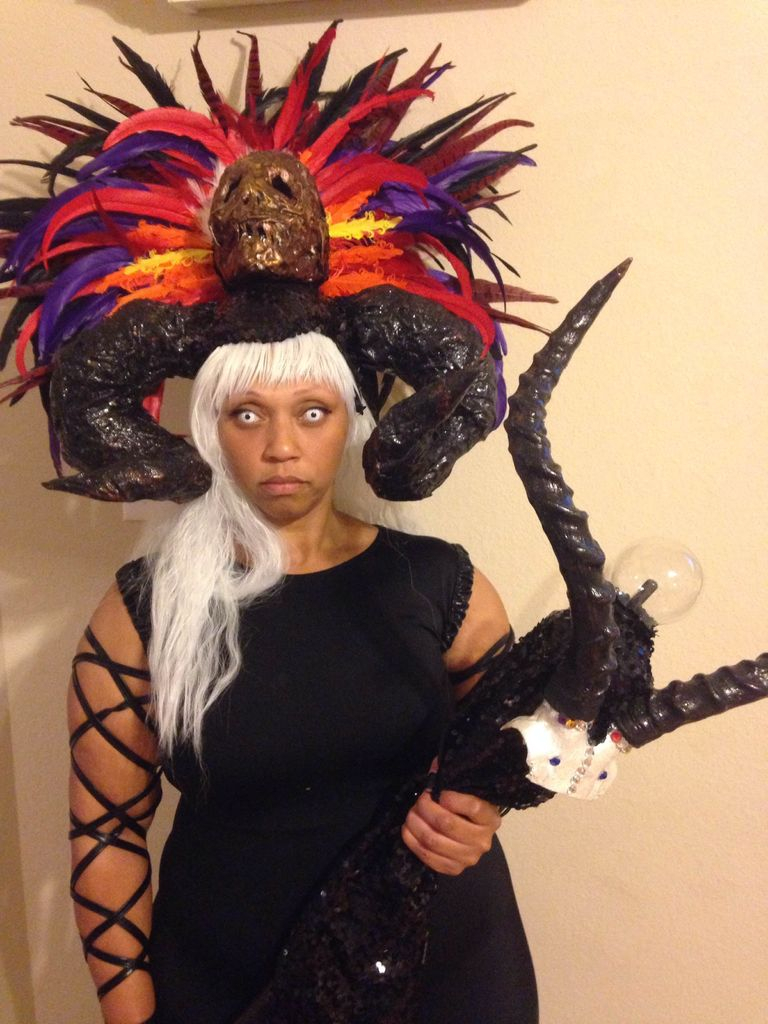 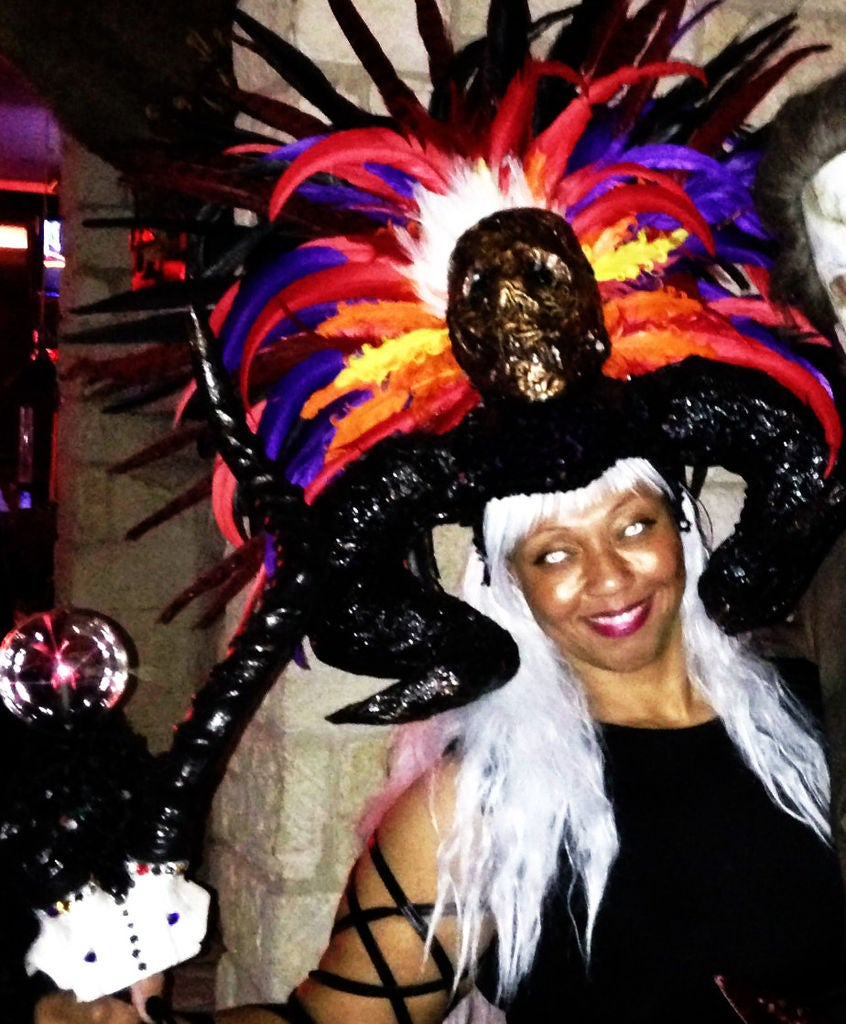 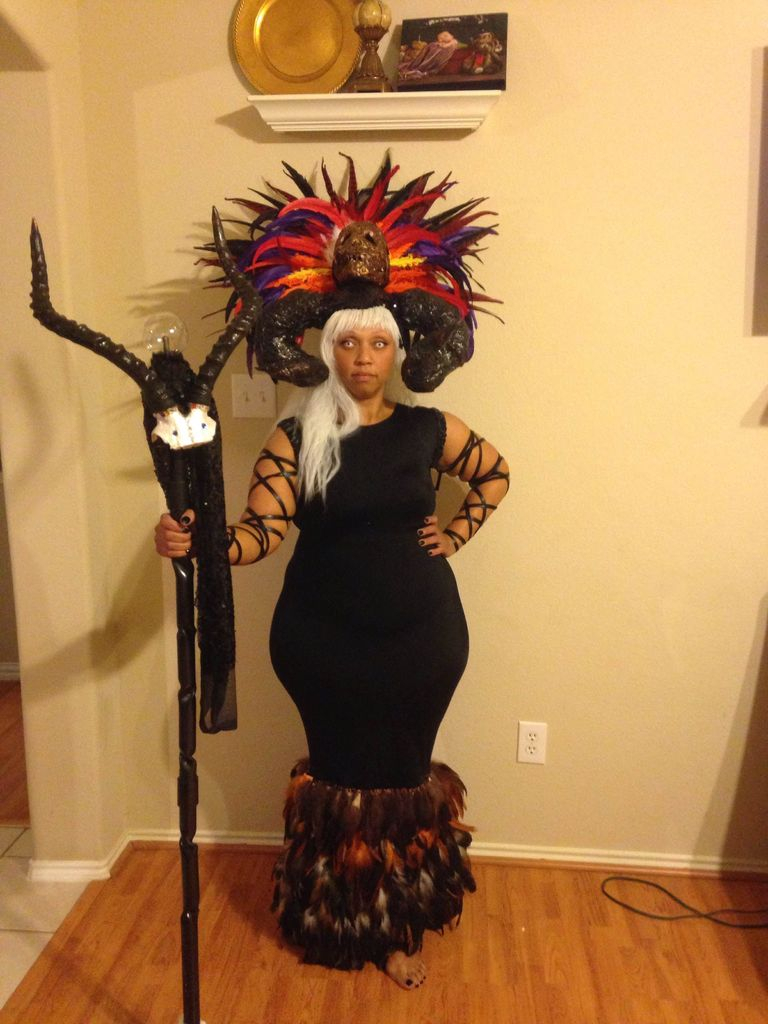 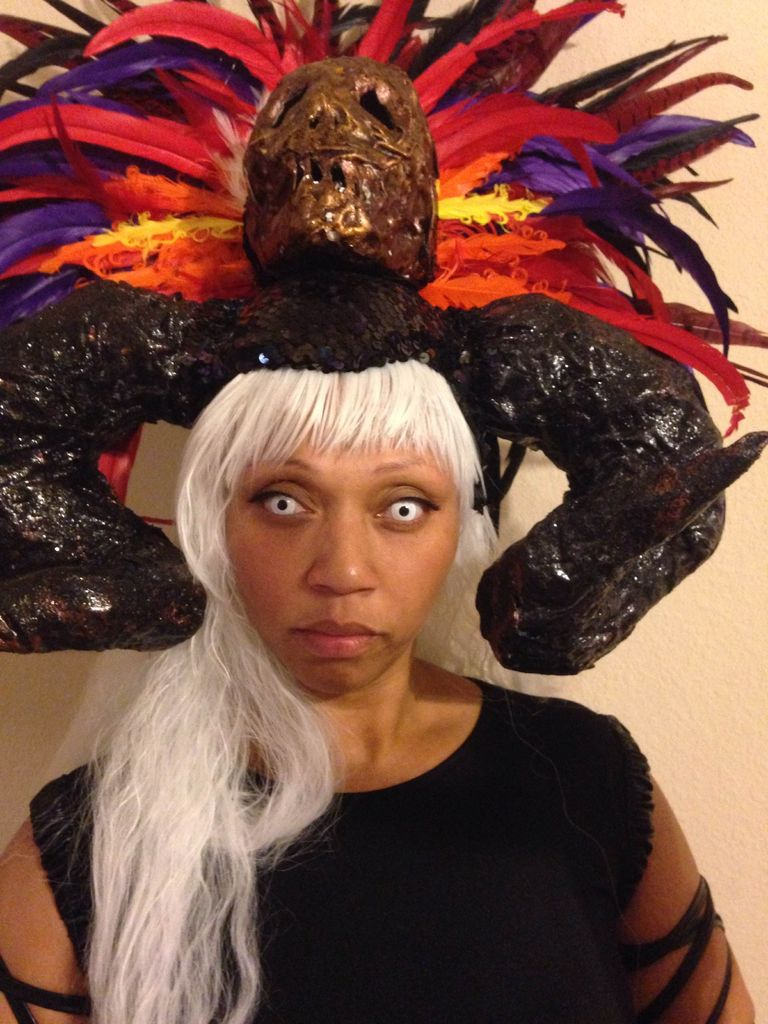