Hey everyone!
This will be a pretty text-heavy post, so be forewarned. The character has some extensive background information!

But I'm going to give you a very quick run-down of my character straight upfront:
This is Lexy the half nymph witch who attends the magical College of Wizardry in Czocha. This is an original character design, which means, I actually played this character at a wizard school LARP in Poland! So, this character is pretty close to my heart!
She is half nymph and half witch, this means she has small pointed ears.

The character make-up includes: a styled lacefront wig, which has partial dreads and dread beads

all of these items and props were created by me exclusively, I sculpted and molded the ears and the scarifications and I created the wand and styled the wig. 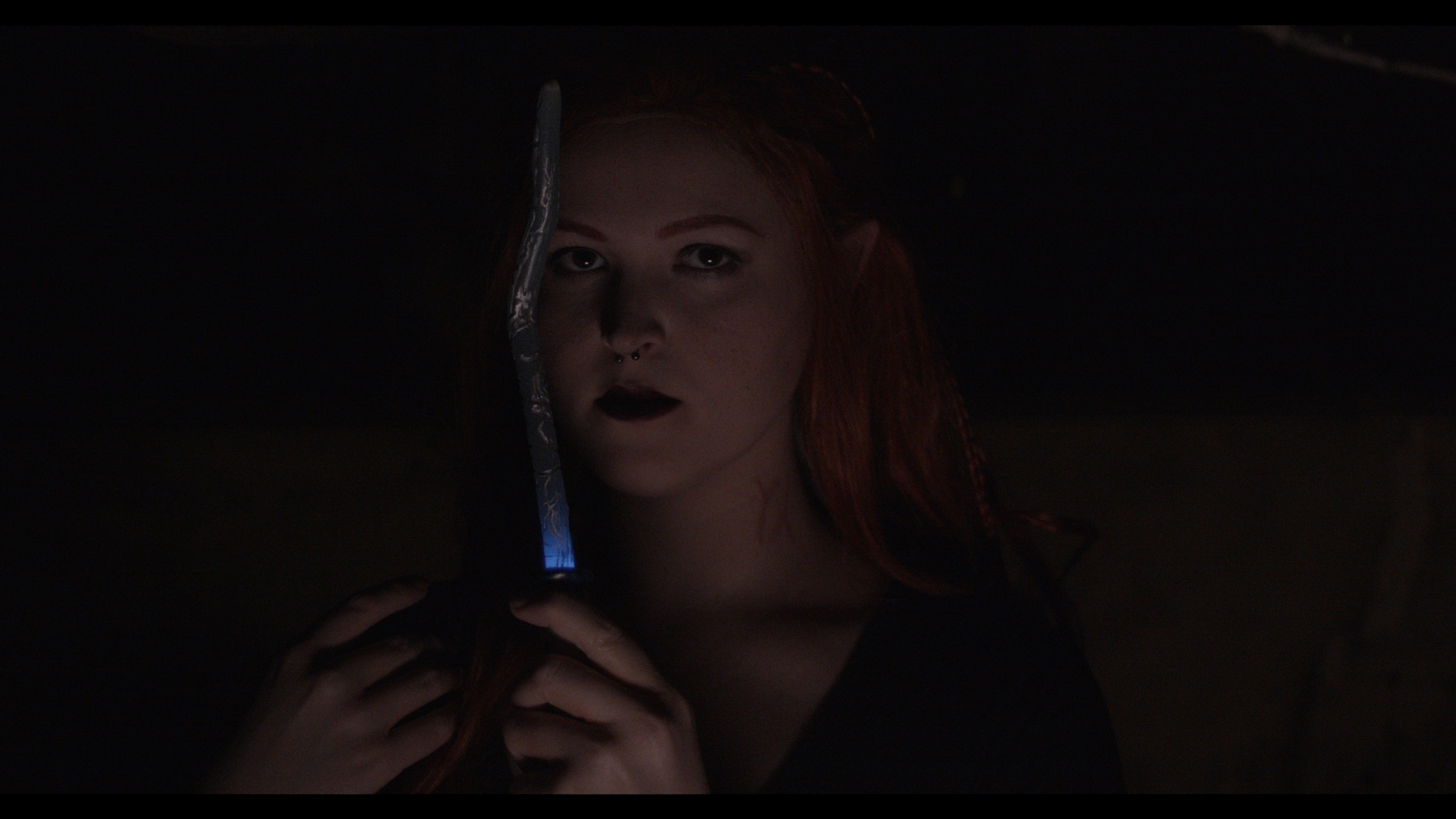 This is an in-character selfie I took before class: 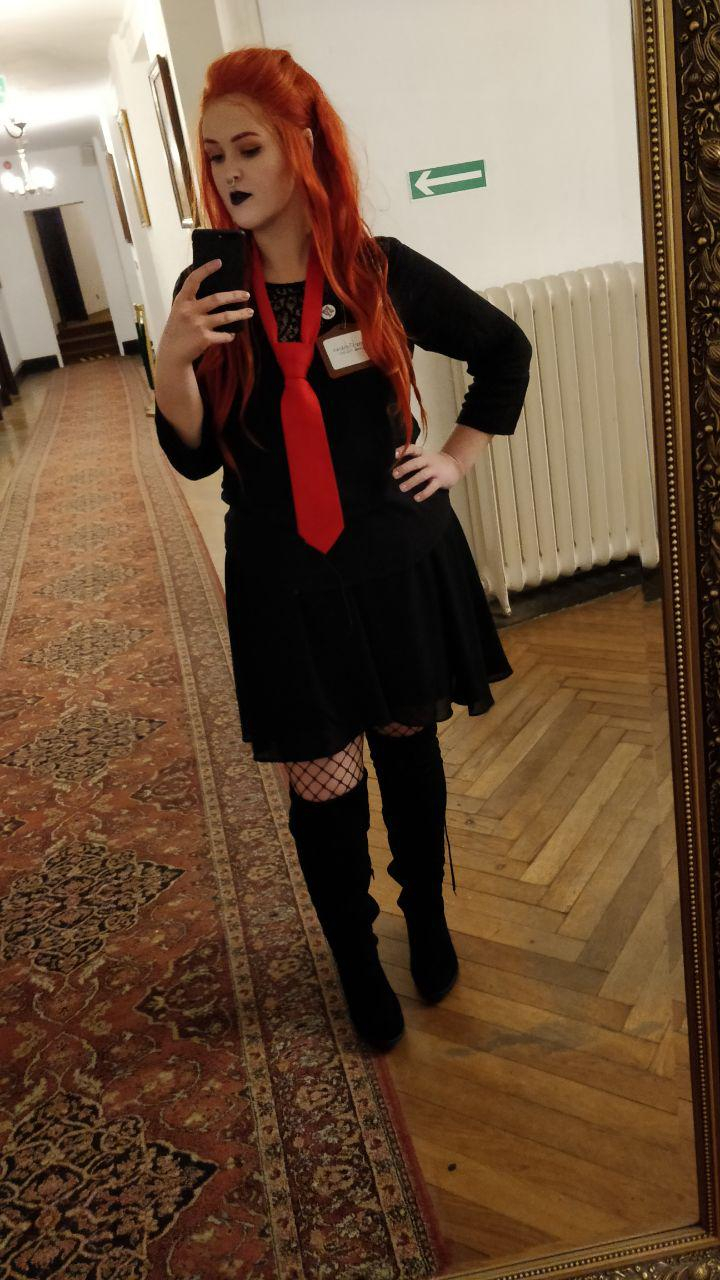 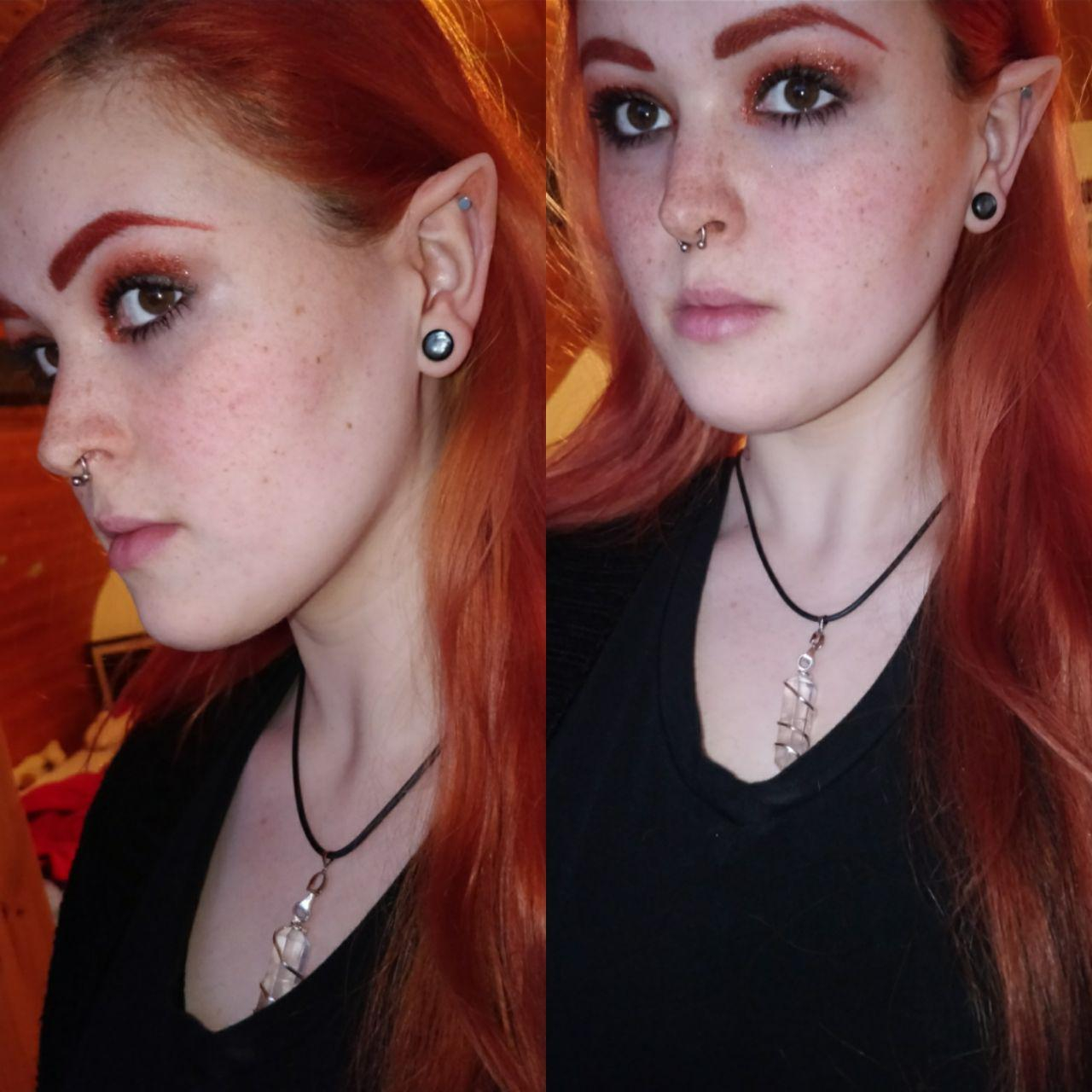 And this was an early version of the character design 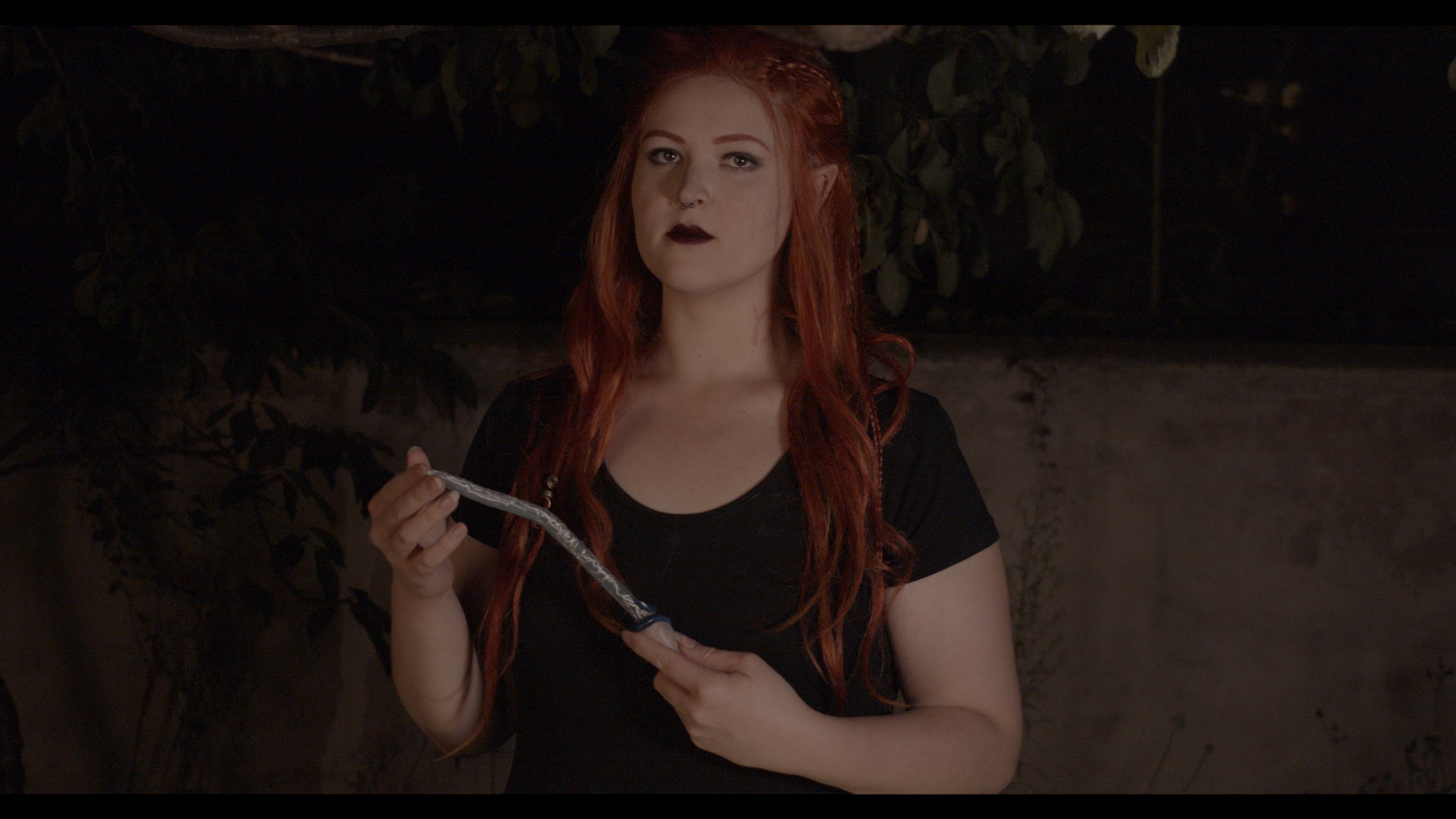 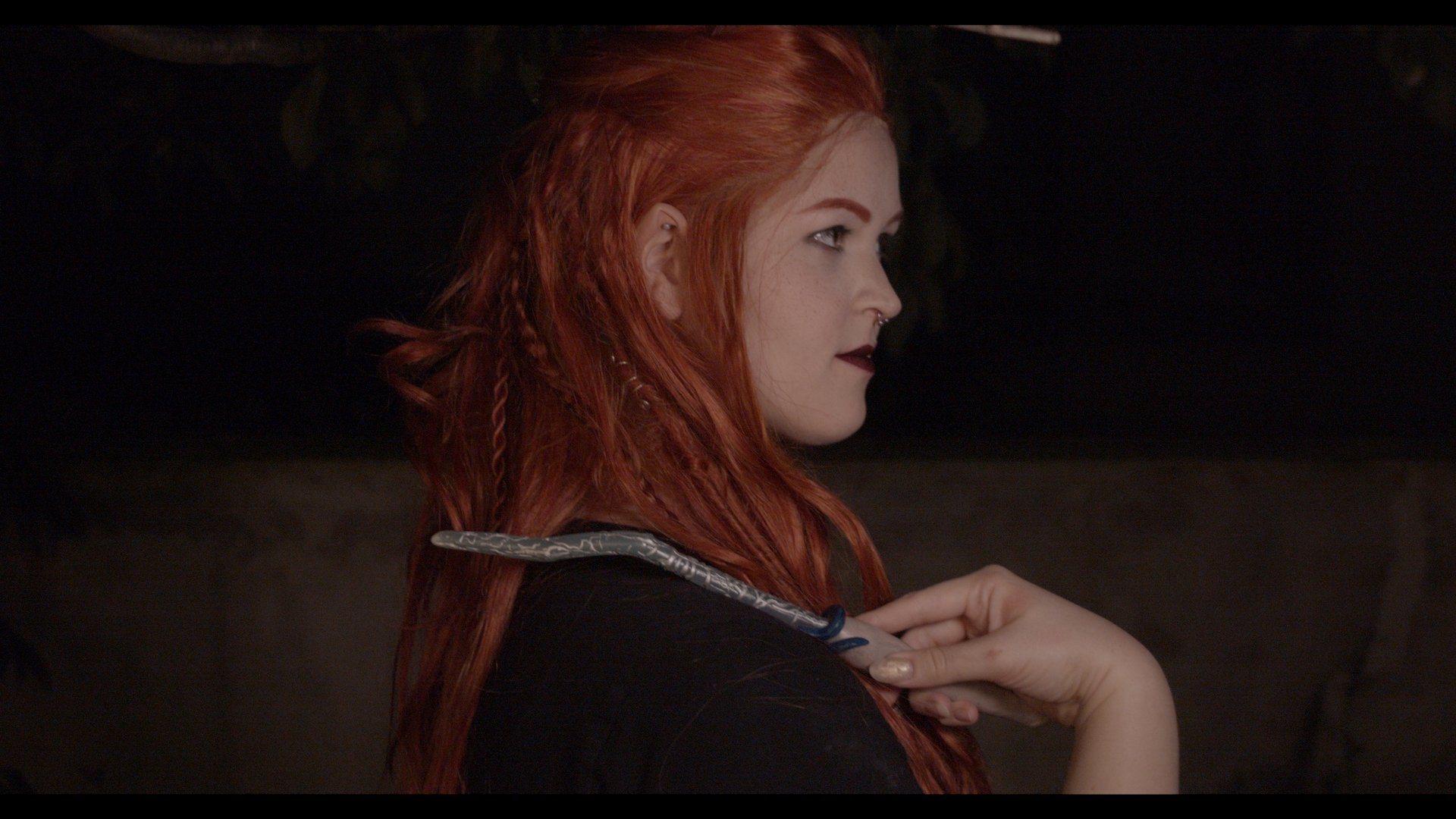 Here, the scarification (pros aide transfer) can be seen more closely and you get a detail of the ear 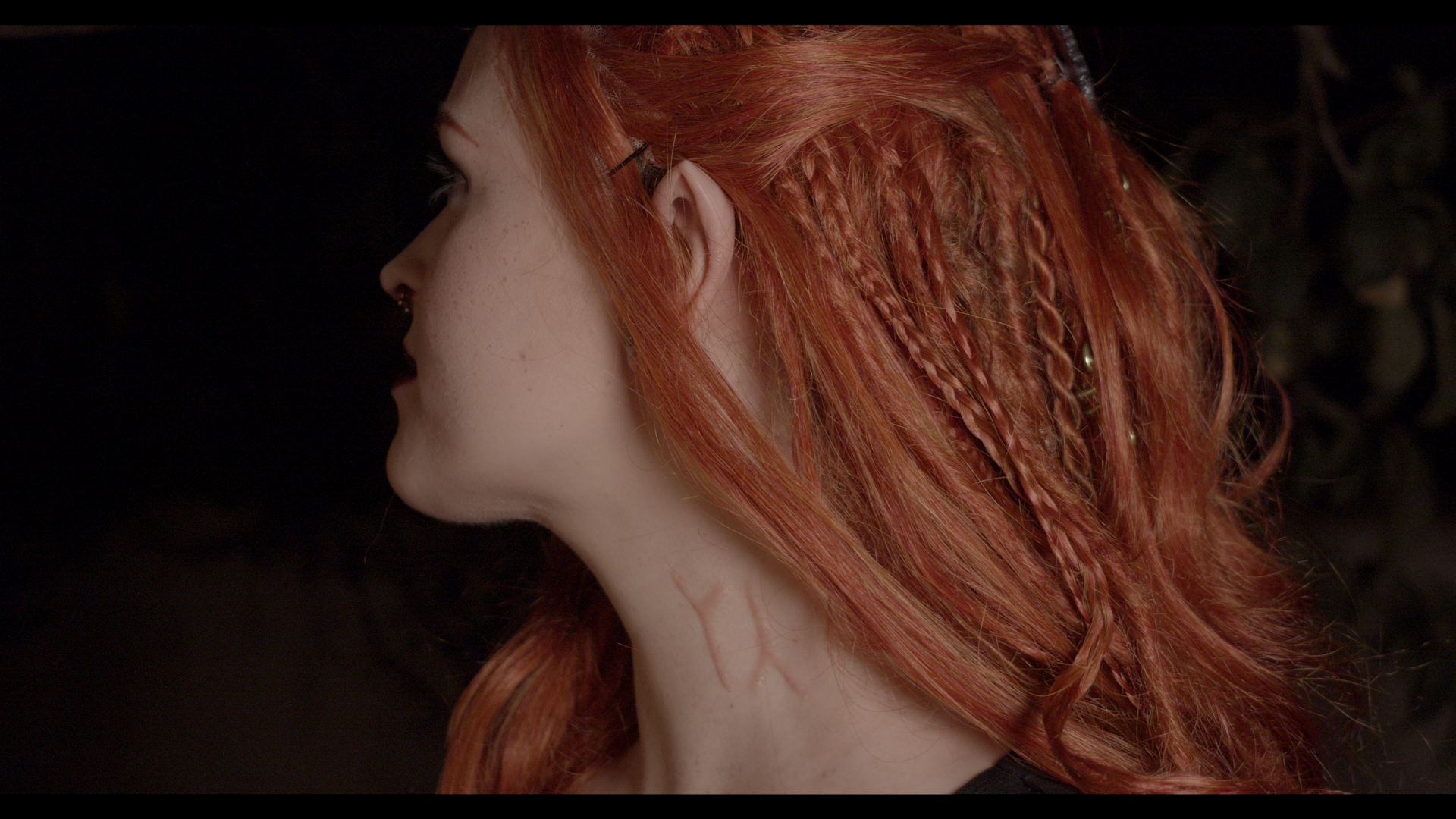 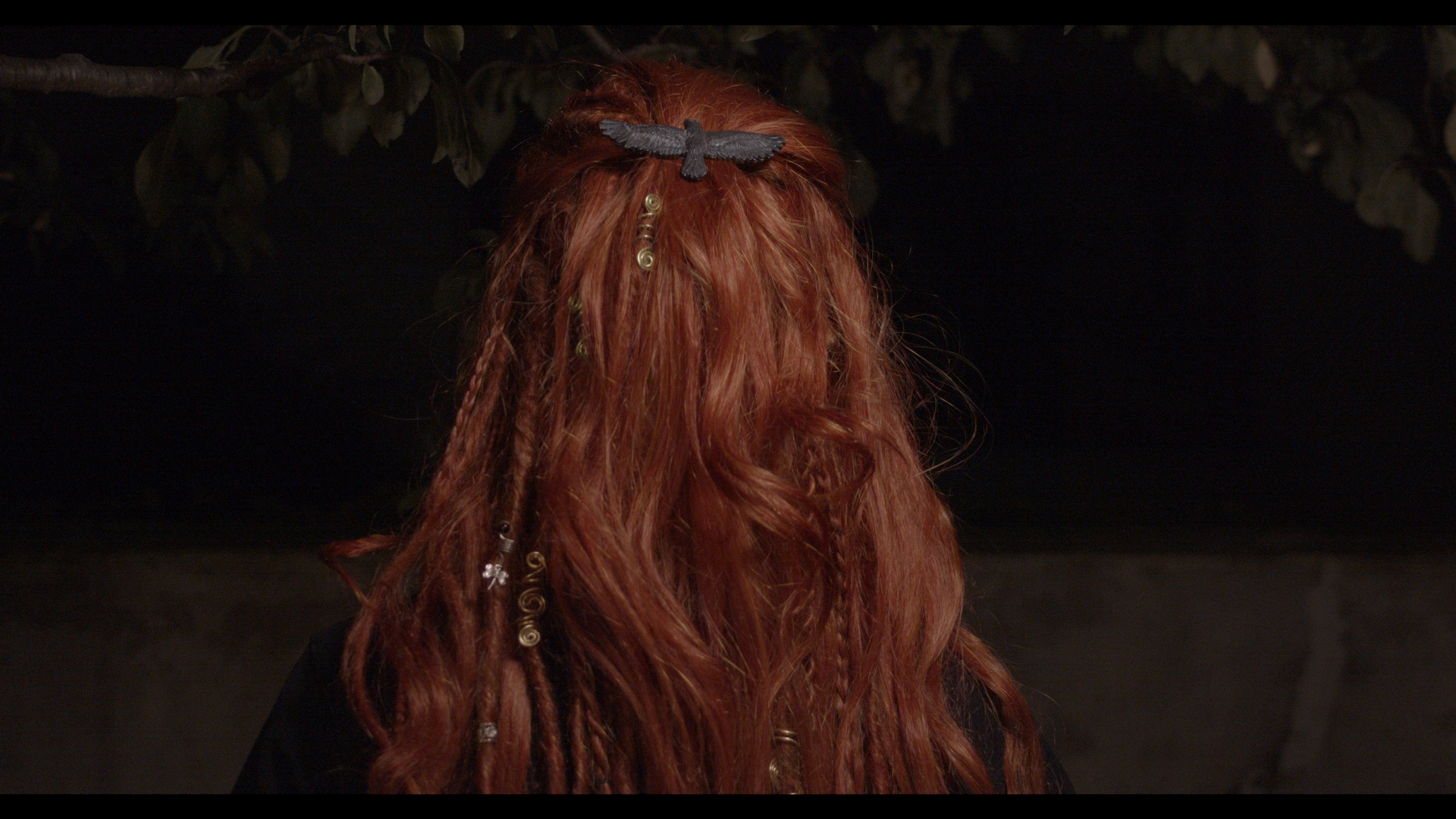 Next, I will show you some progress pictures about my process:

These are pictures that show the mold 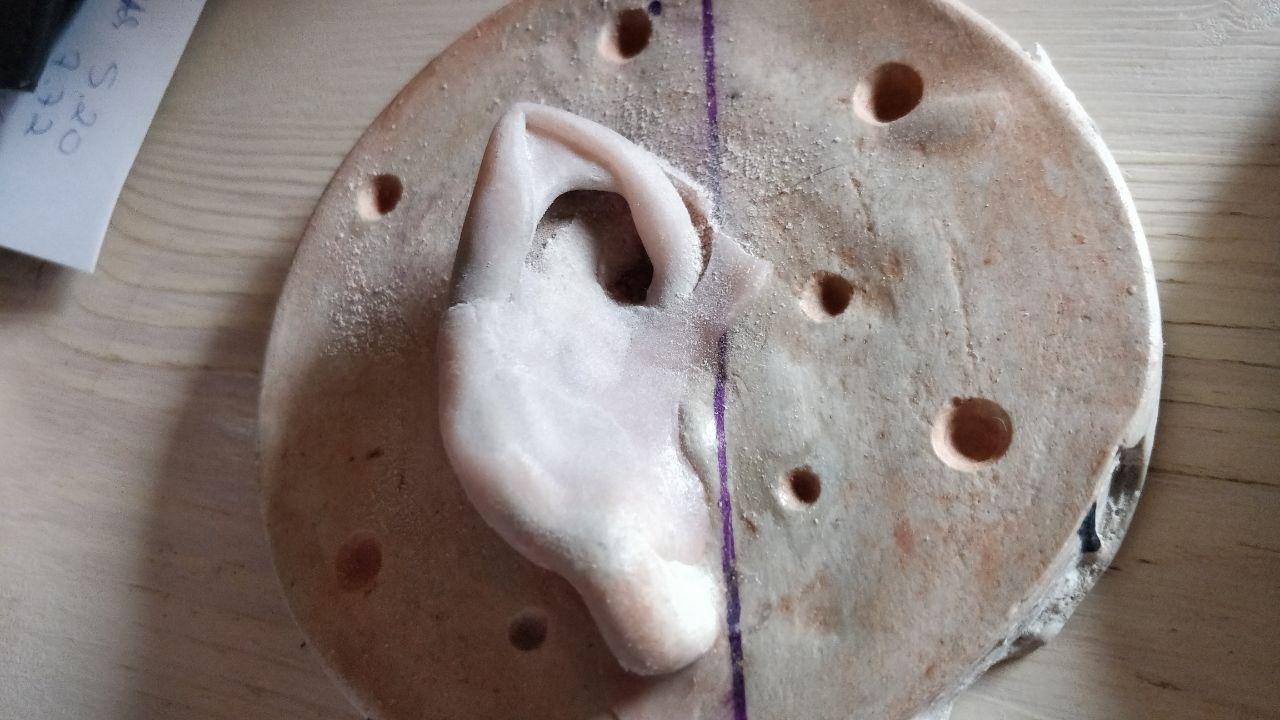 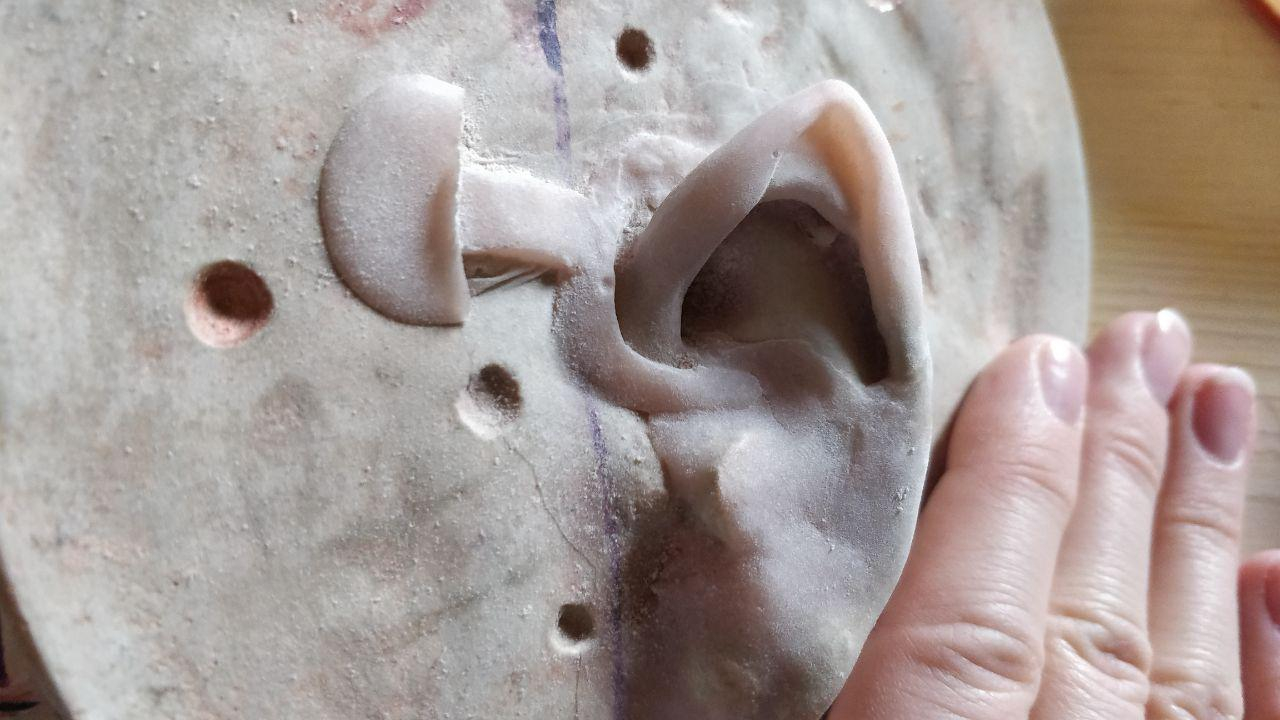 These are some prosthetics that I planned on using, but didn't like in the end 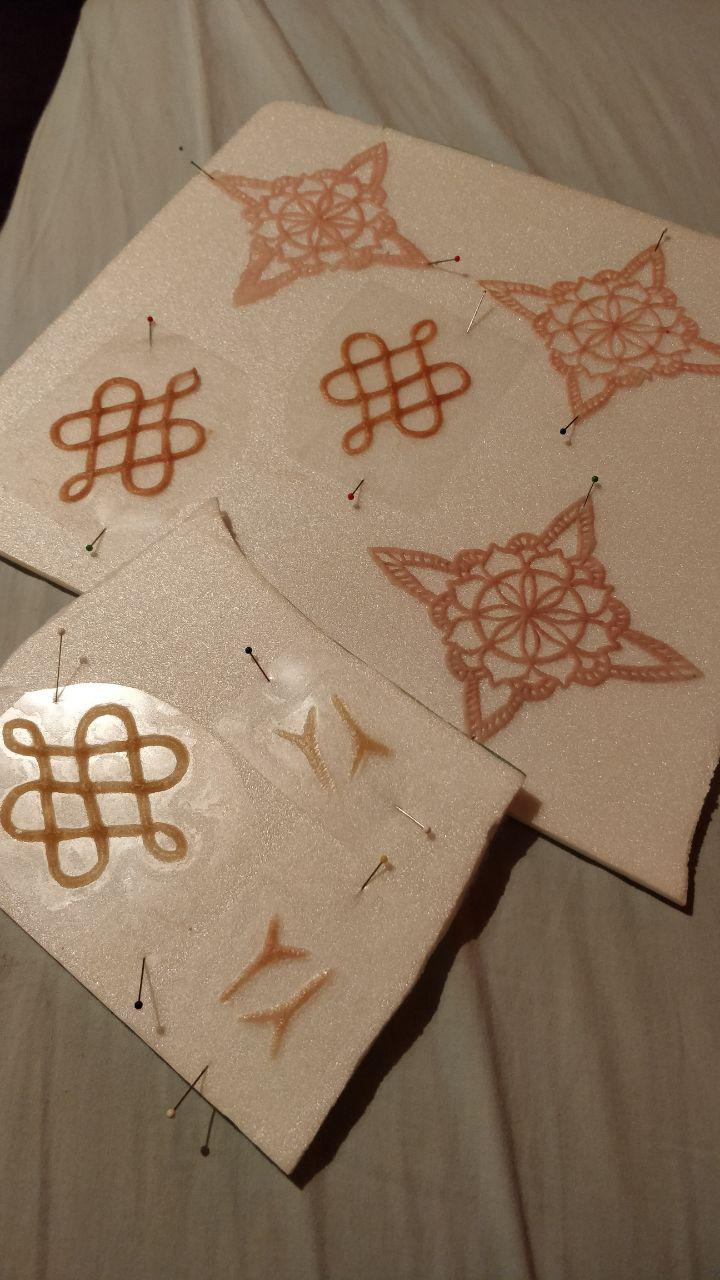 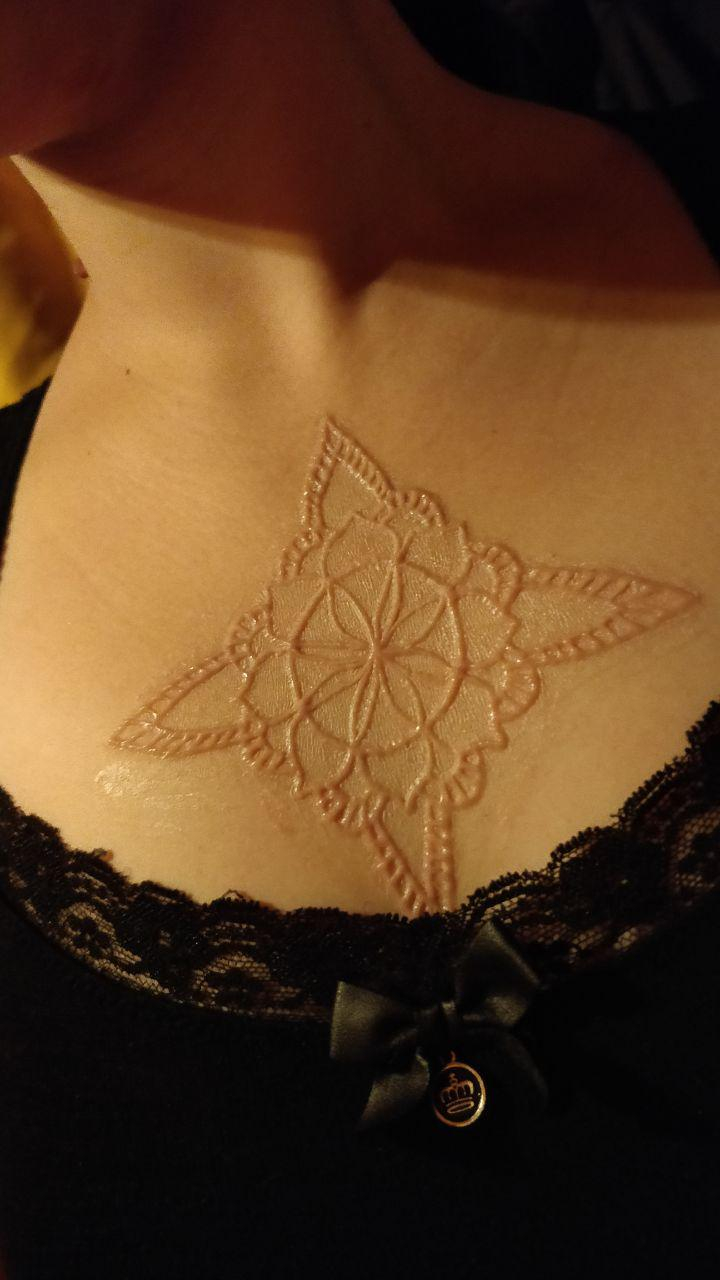 Sadly, I had some trouble getting the scarificiation above to blend in with my skin.

Lastly; this is a picture of a beautiful stick that I found in the forest: look at the amazing carvings some larvae made!
I molded it in silicone to make a resin copy 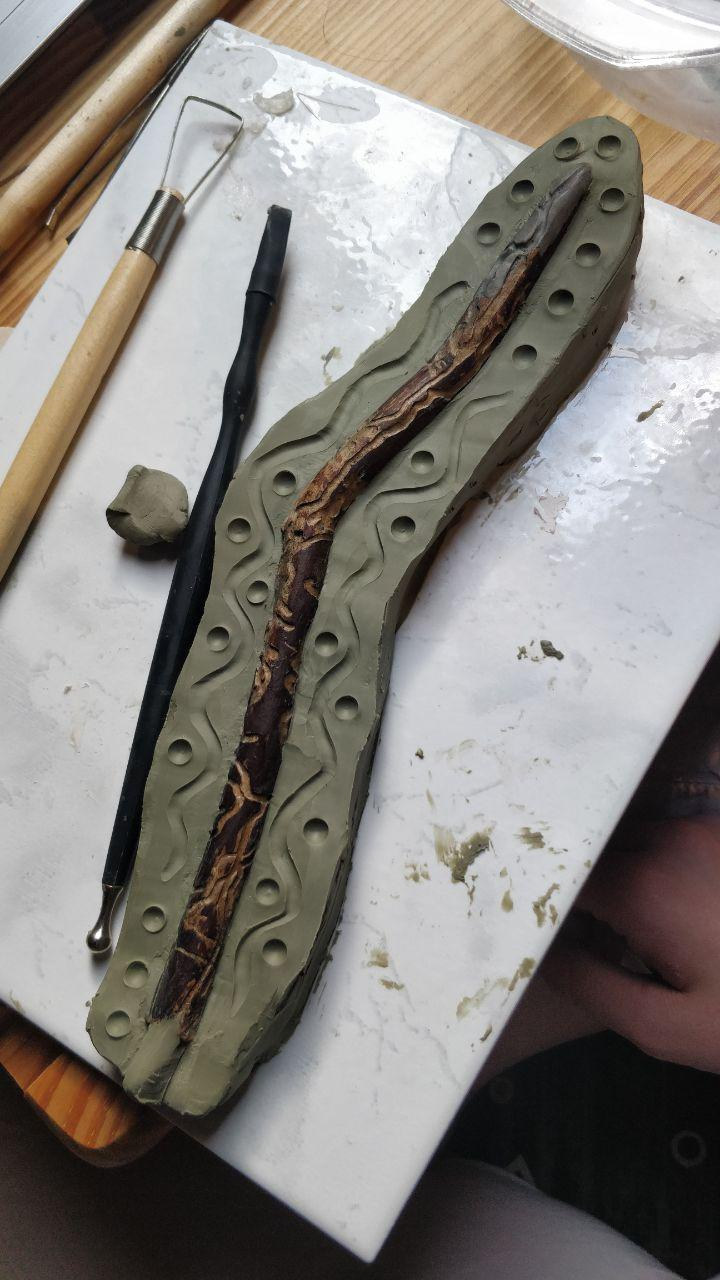 Lexy isn‘t actually Lexy, this is her false identity. But to understand this and her character, you need to know a bit about her past…

Her real name is Arani Merriweather, and she is the daughter of a high-hexborn Scottish Witchard (Arcturus Merriweather) and a real Greek-mythology water nymph called Nerea.
Her parents left Scotland before they got married, as magical interspecies-marriages are strictly prohibited in Scotland, and they didn‘t want to get in trouble with legal authorities there, yet it is a perfectly legal thing in most other (European) countries. As you can probably imagine, the Merriweathers were not very pleased to hear that their eldest child wanted to run off with a non-human creature and they had a huge fight before they left.
When Nerea and Arcturus got married in the Netherlands, they changed their names and lived as different people. They also had three children, Richard (cover name William), Arani (cover name Lexy) and Moram (cover name Charles), all of them were born and raised in the Netherlands. They are aware of their family history and their true identities, but their parents don‘t have any proof of their marriage being legal (they forgot to get a marriage certificate..) or of the children‘s place of birth (yup, they don‘t have birth certificates for their kids either) so they are still hiding from Scottish legal authorities, whom they suspect/know are still looking for them.
To protect their children, all three of them went to a mundane high-school and got a normal high-school diploma. Their teenage-years were filled with study: in the mornings they went to a mundane school, and in the evenings they were home-schooled in magical subjects. After they got their high school diplomas, each child was sent to a different magical College to scatter their traces.
Rumor has it that their high-hexborn grandparents have hired hitmen to kill their mother!

Lexy is known to be part-nymph at Czocha, and it is a curious thing to many students. Being of nymph descent means that Lexy is able to communicate with animals (e.g. by singing to them), especially those that live in the water. But she doesn‘t do this in front of others very often...
It also gives her an aura of benevolence and joy, which makes a lot of students drawn to her, meaning they want to be her friends. This makes Lexy a sought-after figure at the college – much to her regret. While she would love to have a lot of friends (she is every bit as nice and social as her aura foretells after all), she is deathly afraid of someone finding out who she really is, so she would rather keep to herself most of the time. To counteract her vibrant gleeful aura, she chooses to wear mostly black and she has perfected the resting bitch-face. In general, she is trying to lie-low and to not raise any suspicions.
She and the headmaster, whose subject she has been most interested in, have found a way to make her secrets practically indetectable: she has magical (runic) scarifications on her body that protect her.
Yet, she is still pretty much afraid all day long, and she‘s never been able to truly relax for a moment since she‘s been here
She likes almost everyone: mundane-born, mixed-blood, werewolf, fae… the only people she tries to avoid are purebloods and high-hexborn students, as she is always fearing that they might have heard of the mysterious disappearance of Arcturus Merriweather…