Rayne Mason ✭
February 2019 in Animatronics
Hello all!
This is a project I've been off-and-on designing for a while now, but I'm nearing being able to start constructing her! I did a cardboard prototype to get a feel for her odd head/face shape and I'm quite happy with it, and I'm fairly confident in my abilities to build her in general, as I've made a great number of cosplays, monster suits, and furry costumes, both personal and on commission; but I do have some concerns when it comes to things I've never actually done before. I'd like to start with questions regarding servos for her animatronic face, but I'll give you a rundown of the project first:
The character I have decided to name "Stardust", and is a somewhat anthropomorphized fathier (the "space horses") from Star Wars: The Last Jedi. I use the term "somewhat" because I want her to be realistic in a number of areas (mostly the face/head), though of course to be a comfortable suit, anthropomorphism is kind of a given, especially for a quadrupedal creature. I didn't like the idea of a TOTALLY realistic fathier randomly standing on two legs, that seemed visually odd and confusing, so I did design the character with some anthro elements to coincide with the style I have in mind. I'm currently designing an outfit based off of the Rebel/Resistance pilot suits for her to wear, though I would like the clothing to be minimal to avoid looking like a "partial" furry costume. So besides being bipedal, she will be wearing some sort of mild clothing and have some sort of hands (in the process of designing hoof-hands right now). I'm also making her a pair of my "werewolf stilts" I've used in a few werewolf costumes, though revamping the design into aluminum instead of wood and metal. You might ask, "didn't you just say you wanted this costume to be comfortable?". I certainly did, but no worries! My later renditions of my werewolf stilts I was quite happy with, and even managed to participate in convention parades in them, so it's not terribly bothersome for me to wear stilts, give that my re-designing doesn't ruin that (fingers crossed, but they should be even more comfortable than my previous pairs if my plans work out!)
For those of you that may not know the creature I am talking about, here are some pictures: 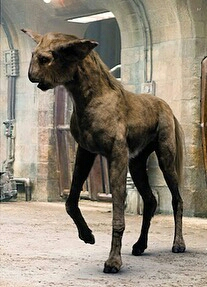 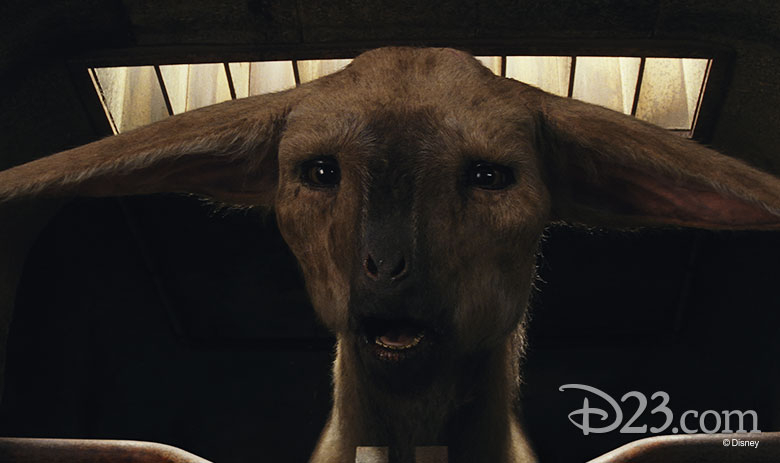 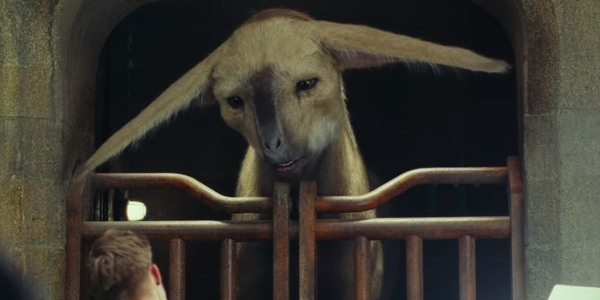 Anyway, I'm good with building everything from the stilts, up to her body, arms, hands, etc, but the head is where I'm kind of stuck design wise, because I want her face to have a few animatronics in them. I've never personally made anything animatronic before, so I wanted to start with some simple things. All I'd like is some nasal movement (her nostrils contracting/expanding and maybe the nasal passage on the sides of her muzzle moving a little), and eyelid/brow movement (JUST open/closed, no expression needed), and I DON'T need the actual eyes to move, I'm going to use the acrylic "follow-me" method, and her jaw will be rigged to open with my own, so that's also unnecessary. In designing an underskull to do all this, it seems rather simple after having watched some of the videos on the SWSCA main site, but I have a few concerns listed below:
1. I am a user of sound effects in costumes, and I'd like this character to be no different. But this also means that there would most likely be a speaker in her head somewhere (more than likely her muzzle because there would be nowhere else to hide one to face forward AND be at least semi-realistically coming from around her mouth somewhere*). My concern is, that speaker will be taking up room for servos in her face, but that also leads into my next question...
2. Since this is a wearable costume, I'm a little concerned about the noise I've witnessed from servos in the past. If I DID find another place to put a speaker other than her muzzle, and I placed the servos in her muzzle, would you not hear all kinds of noise while being near her? More so, wouldn't I hear all kinds of noise from inside the suit if they're right in front of my face? That's not really something I'd like for obvious reasons, though I would assume that the sound effects WOULD mask the servo noises in a number of cases, but not all. Are there quieter servos, or ways to quiet them down? And...
3. Is the ONLY place I can put servos to control her face actually IN her face? To make her general style more realistic, I am planning to give an arch to her neck/back to simulate the longer neck the creature has, so I could theoretically place items in that area (though not in the bodysuit back, as her head would need to come off to de-suit and I'm fairly positive you can't easily detach servo wires?) I'm running on the assumption that all the actual servos and wires to them and to the face have to be in the same part of the body because of the detachment thing (taking her head off). On top of that, if I did put the servos behind my own head somehow (the back of her neck), wouldn't moving my neck pull the wires and cause the movement just like the servos pulling?
I'd like to add that I'm mostly considering the detachment area of the head to be around the shoulders, where her neck would come down and snap into the bodysuit around there. If there's a better option than that though, please let me know! I do seem to see quite often in behind-the-scenes that the neck of the creatures are built into the bodysuit and the actual HEAD part comes off. Is that beneficial somehow? Or just an artistic choice?
*In regards to the speaker, my costumes in the past have contained a small (but deep) Bluetooth rechargeable speaker (808 "Thump" brand) somewhere in the head, hooked up to an Adafruit sound board via an auxiliary cable, and controlled by buttons in paws. I've added a link to my latest cosplay that uses this setup here. The sound is great and generally loud which is good, and since it faces away from me, it's not loud for me at all. Is there maybe some solution for Stardust's face construction that includes finding a different speaker(s), and if so, suggestions? I'd like to get the speaker as close to her mouth as possible for realism.

Here are some pictures of my cardboard prototype (NOTES: I may change the neck style to meld more with with the bodysuit I design and make it look slightly longer and less completely anthropomorphic; and, I cut her left eye tear duct area out to test area for buckram, though after thinking about the eye animatronics, have realized buckram will inhibit movement and will find other solutions) 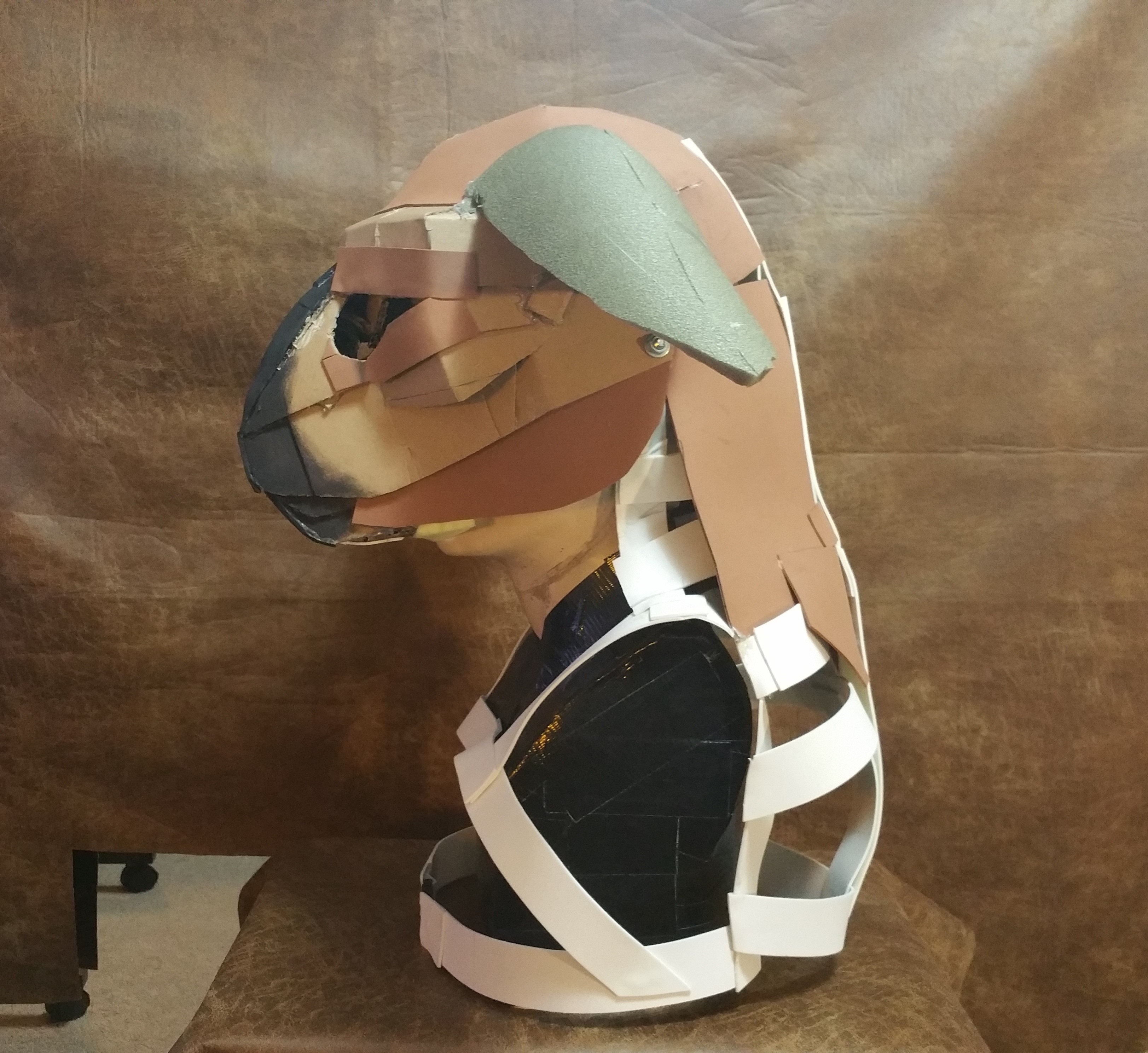 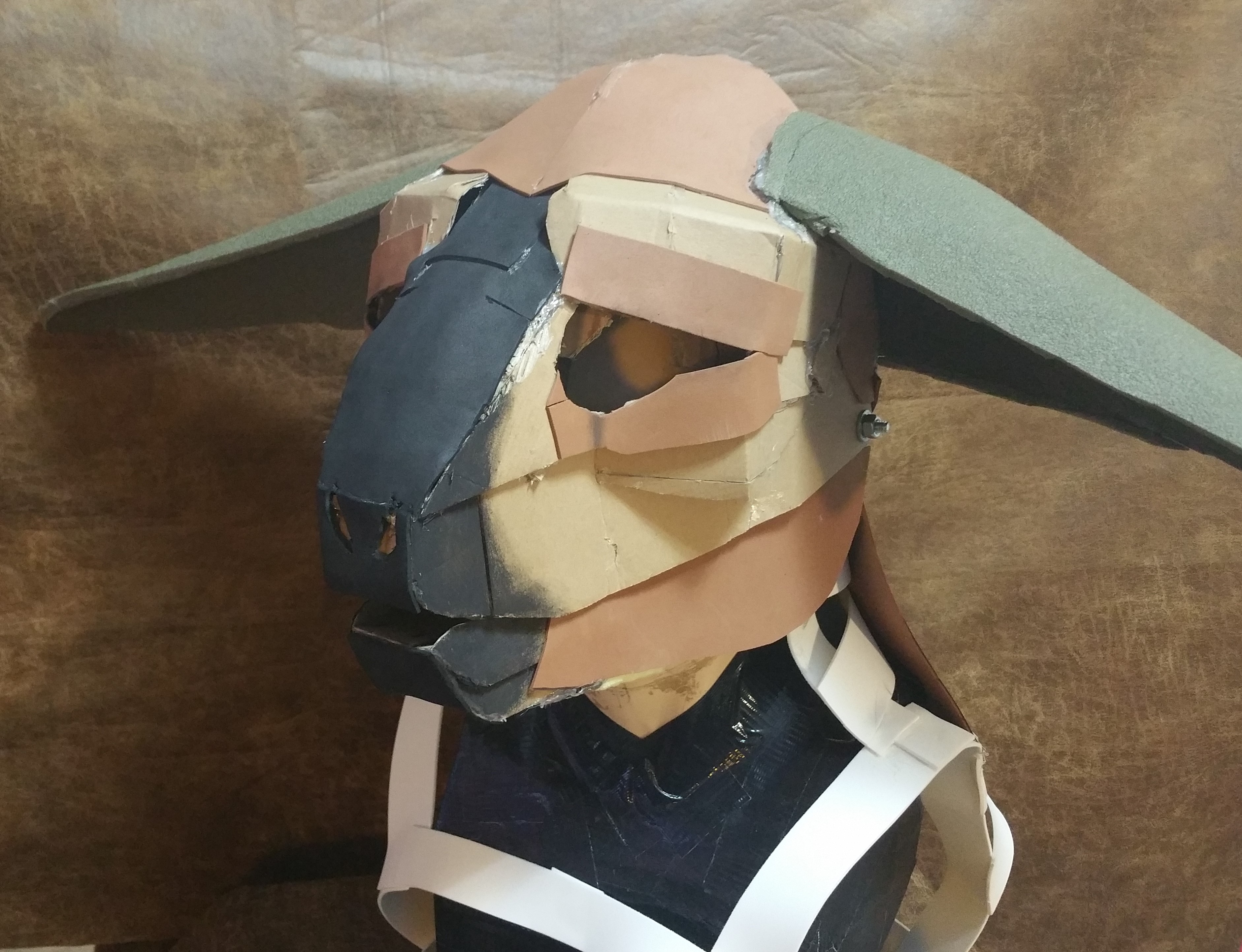 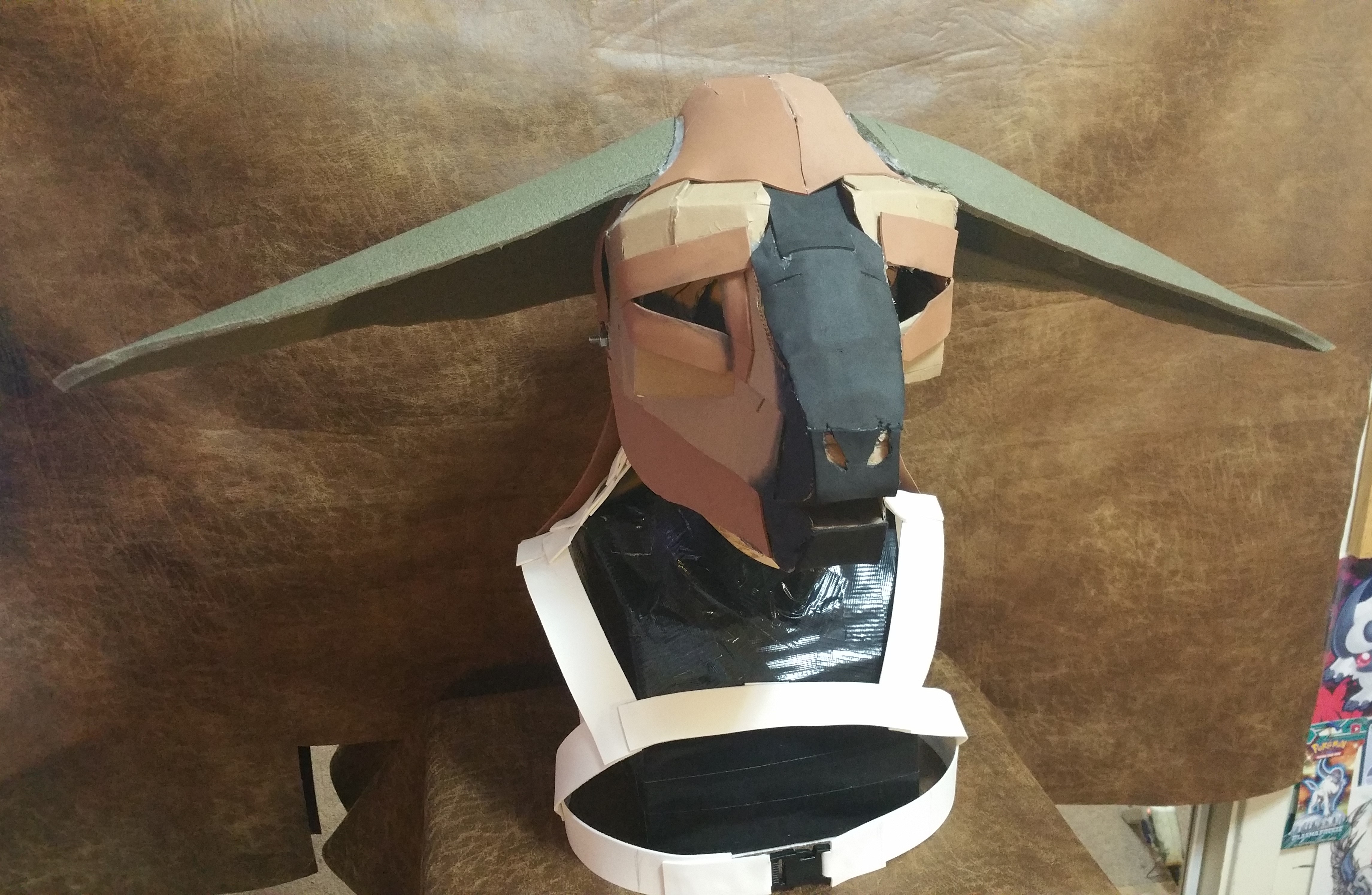 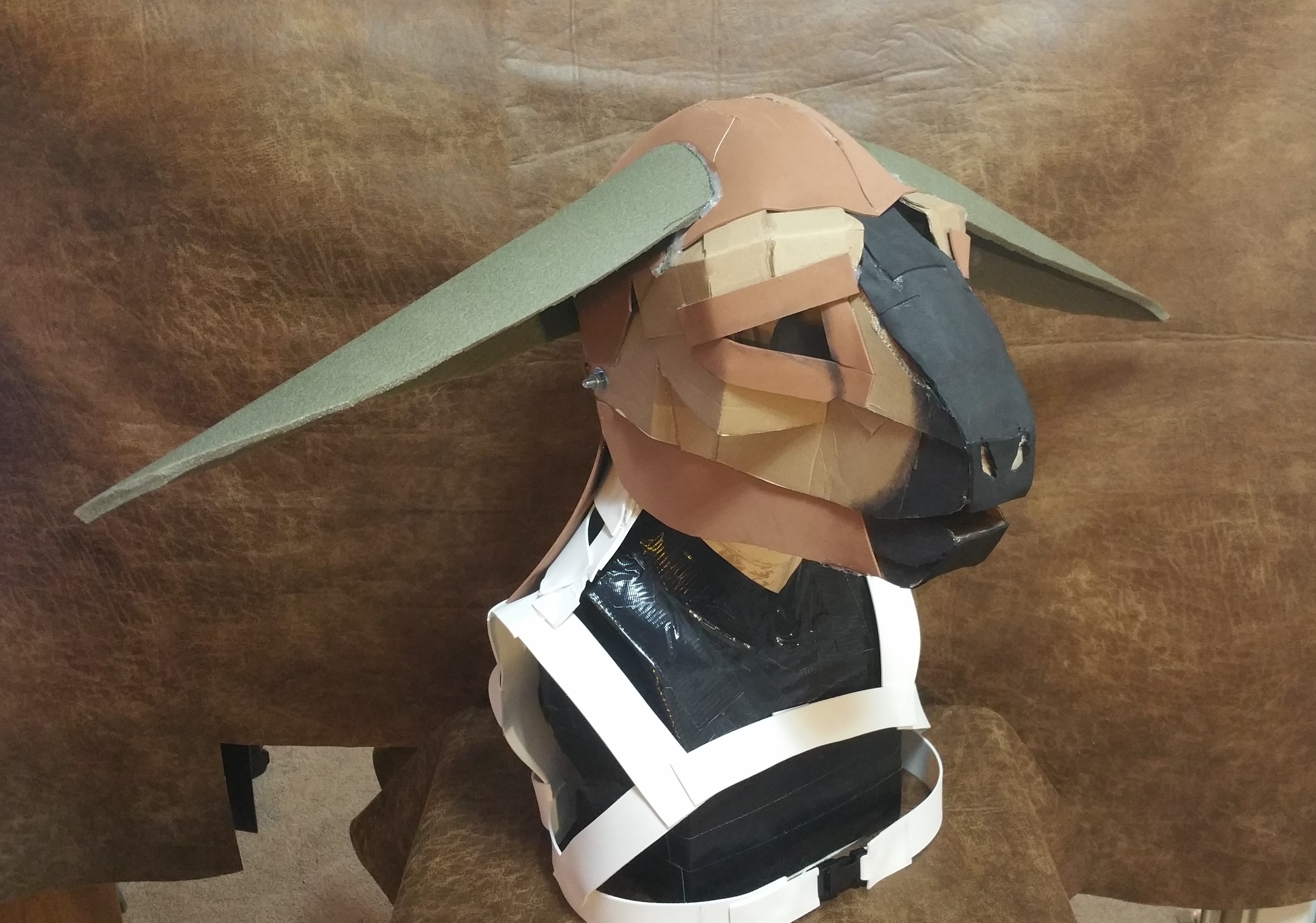 Other questions I'm going to have in the future will have to do mostly with flocking fur onto the face and transferring fur other ways, and possibly questions regarding the underskull and casting a skin for the face, but for now I'd just like to solidify her mechanical workings in my head.
Also if anything needs to be cleared up, I can draw up illustrations or add other pictures, so please request away if anything else is needed! And thank you for checking out my project!
1