I always wanted to do my own original stuff and many friends asked me, if i wanna do existing caracters.
All i was able to answer was: "okay,.. maybe a spiderman? The 531276 th version? Or a Sub Zero mask No. 2145298? Thats only the question, who is able to "copy the best way"?"

I like Cosplay- there are great copies of existing characters out there, but it isnt my preference.

Then i was asked by a fantasy film fan, if i could create a bust of a lycan from Underworld. He asked me if its possible, that i make a copy of these ECC original busts, which were selled back in 2011.
I said, that that isnt possible, because i NEVER will copy the work of another artists. Certainly not the work of Steve Wang who did the bust for the ECC.

Many words, short resume:
I did the lycan bust with my own influece, real wolf reference pics, pics of german mastiff gums and some touch ups like crossbow  bolts in the torso. Battledamaged- i love that!

So i build an armature out of iron pipes and a display dummy: 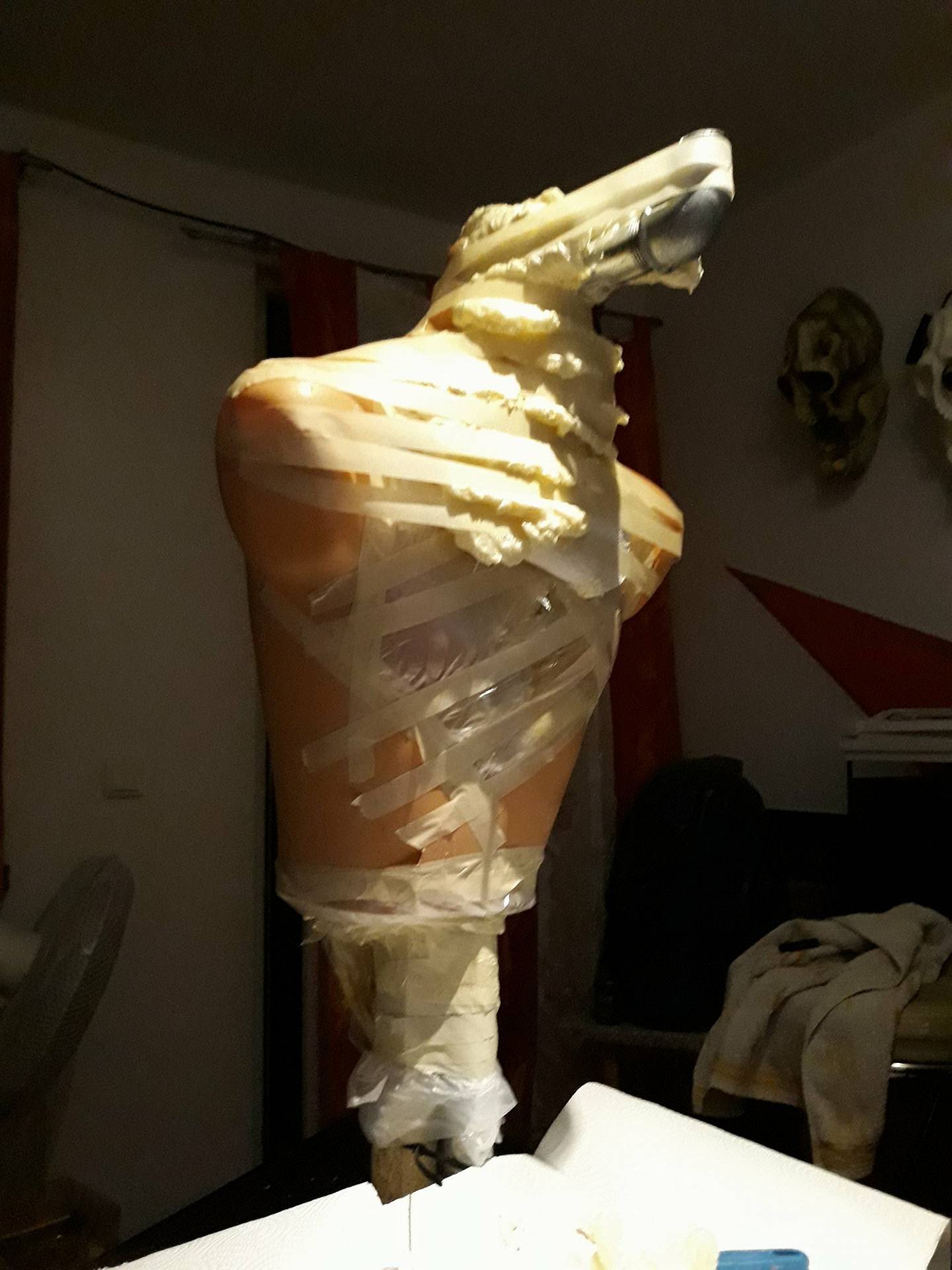 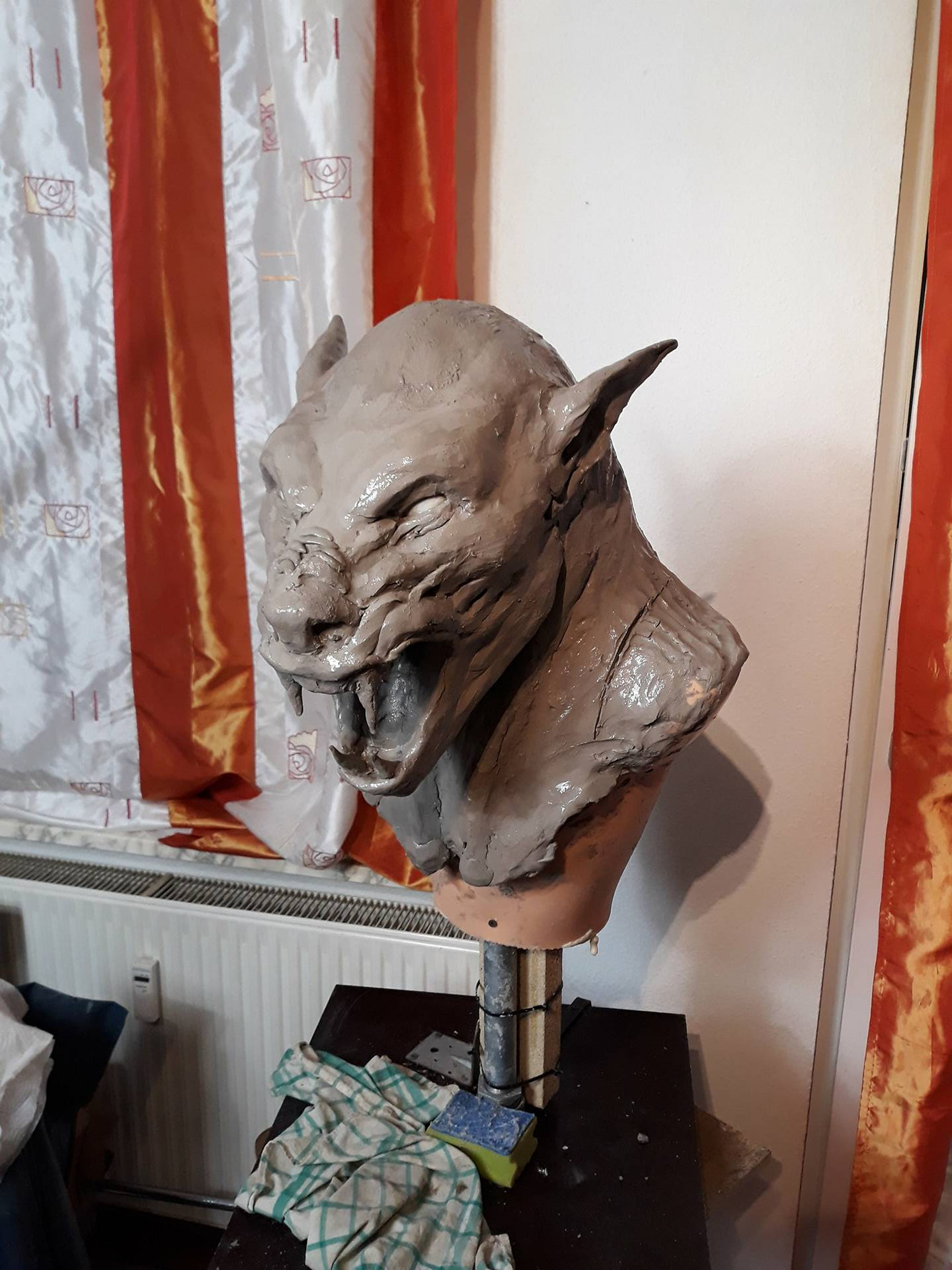 .... and  realized, that i have to cut the shoulders of the display dummy off, because the neck ran into them

I did Chavant teeth, put them into the mouth and fixed/ shaped the gums, molded the teeth seperately to cast them later in dental resin. 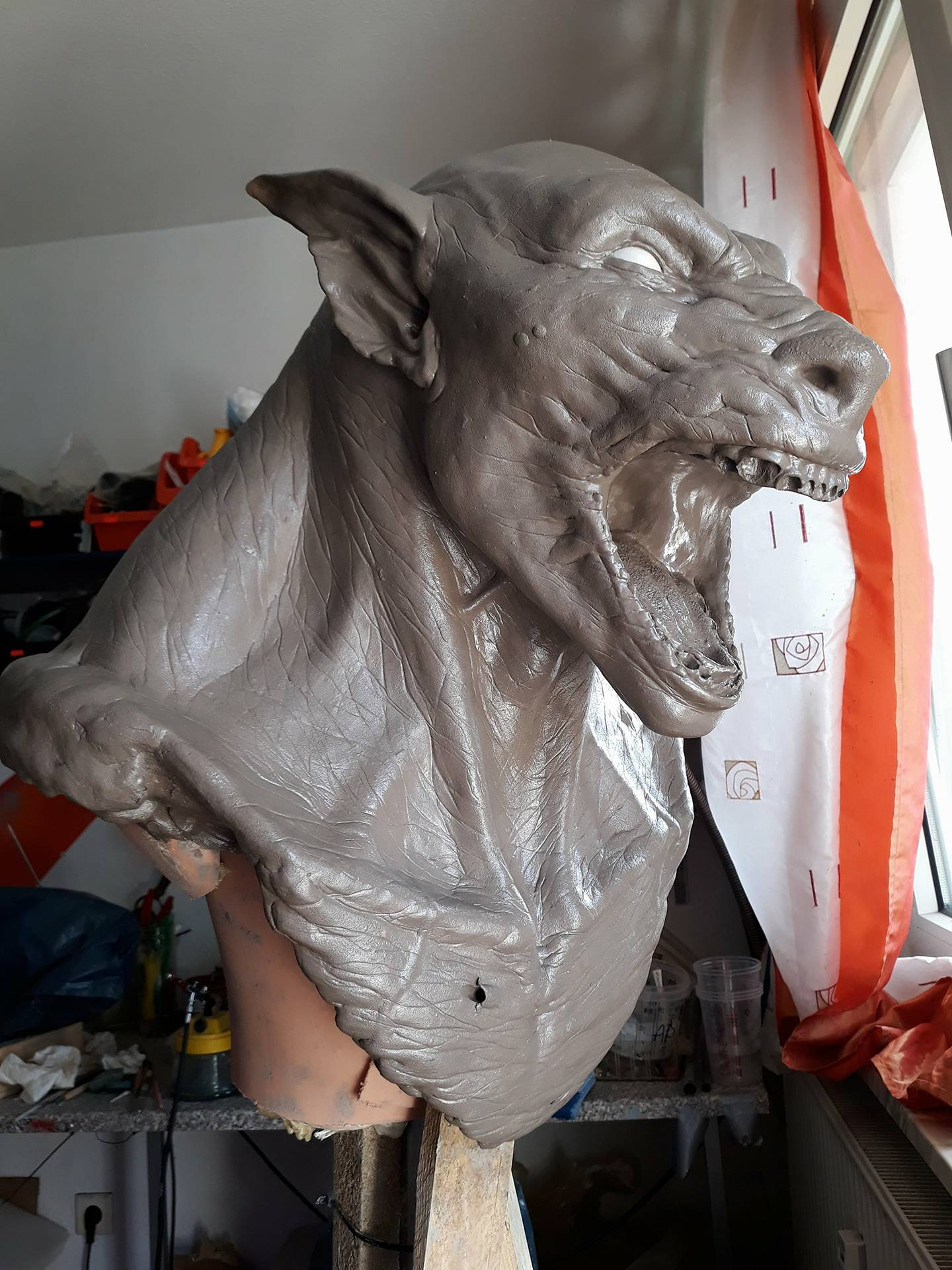 I did a silicone/ fibreglass mold and casted it out of my prefered Smooth Cast 65 d: 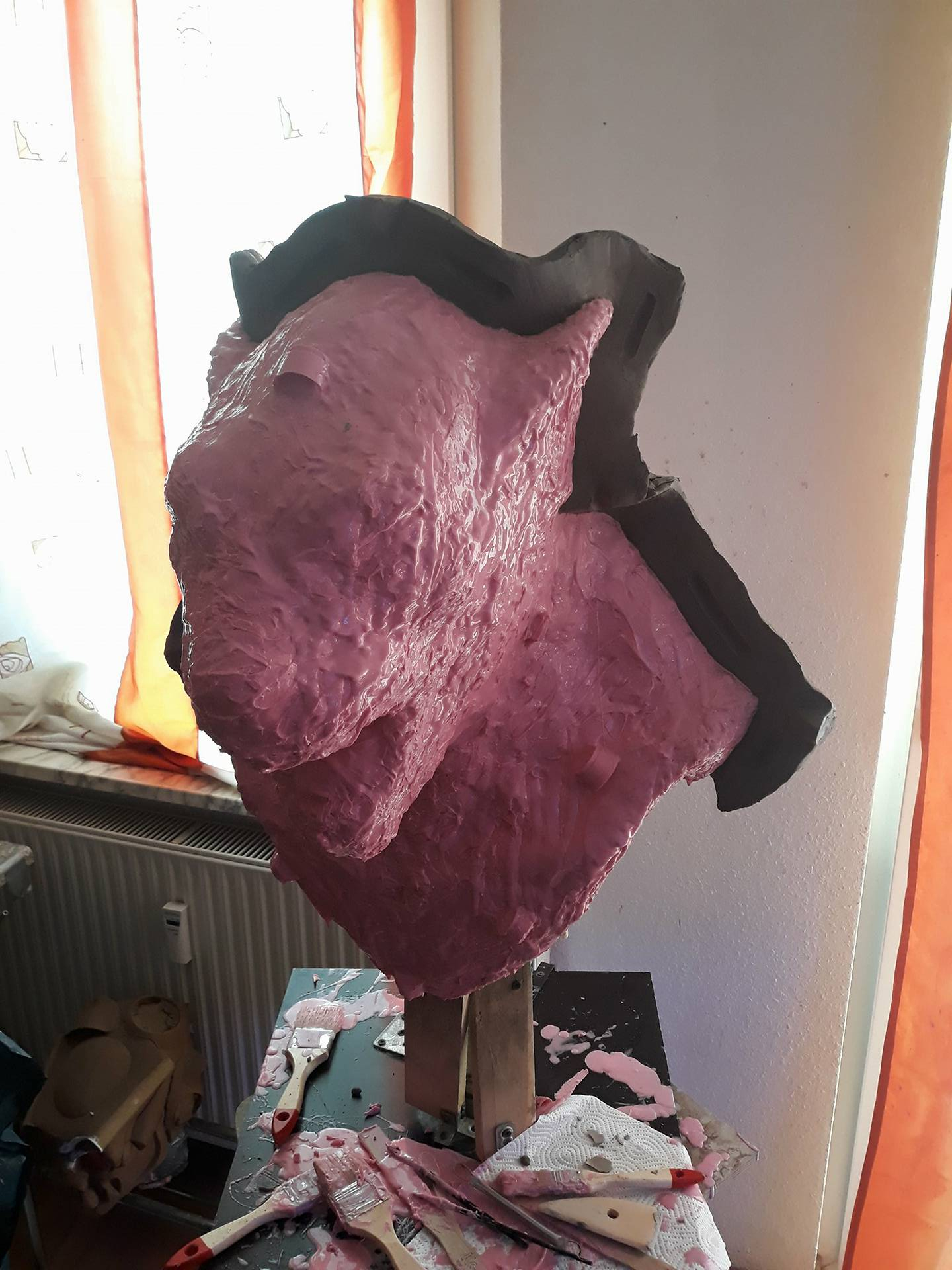 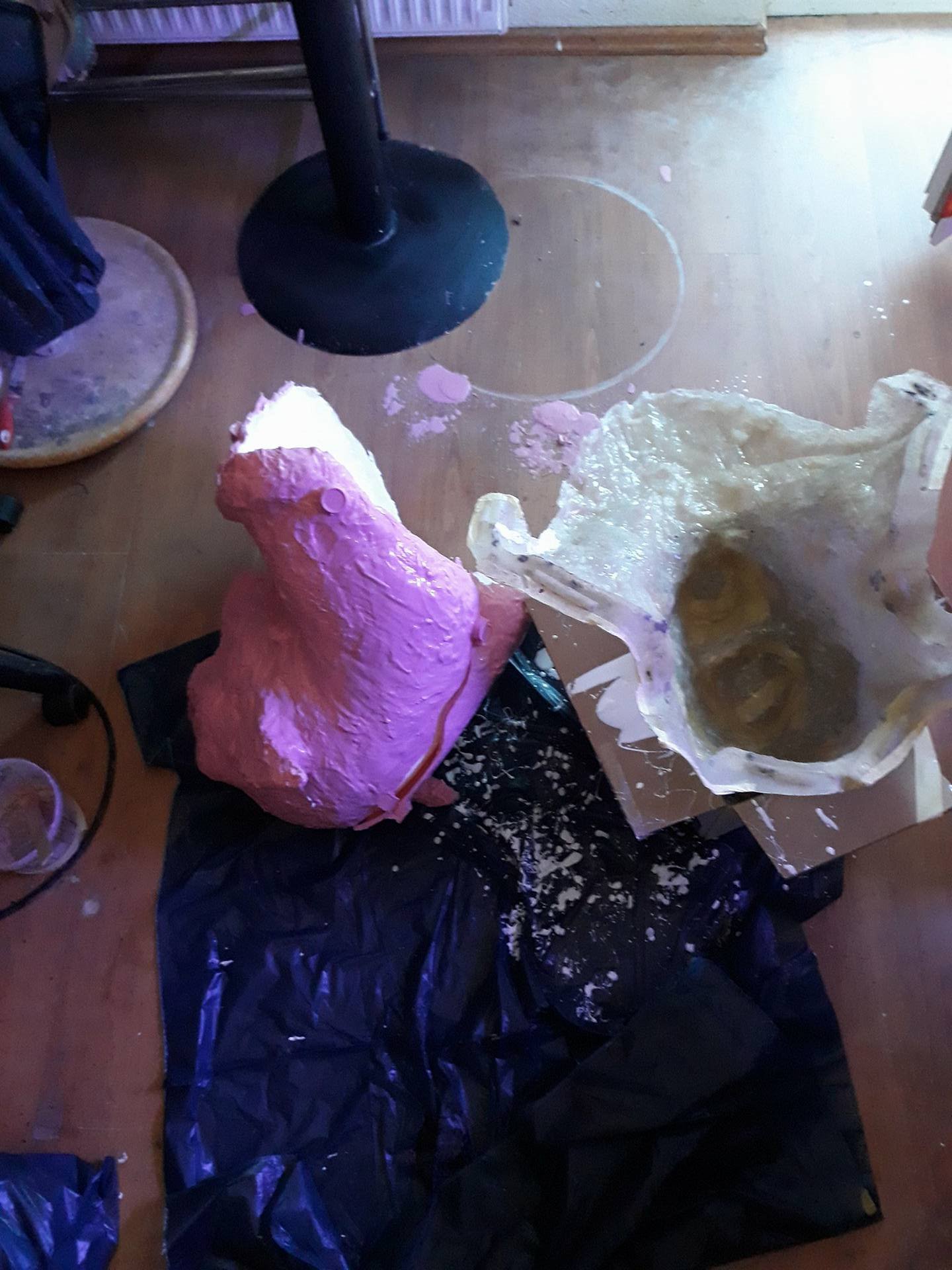 I cleaned, patched and rubbed the cast with alcohol to prepare it for the paint.
I decided to try out an octagon pattern and ornamentations which Steve Wang mentioned in his Latex Monster Mask painting class, casted the teeth in dental resin and glued them into the gums. 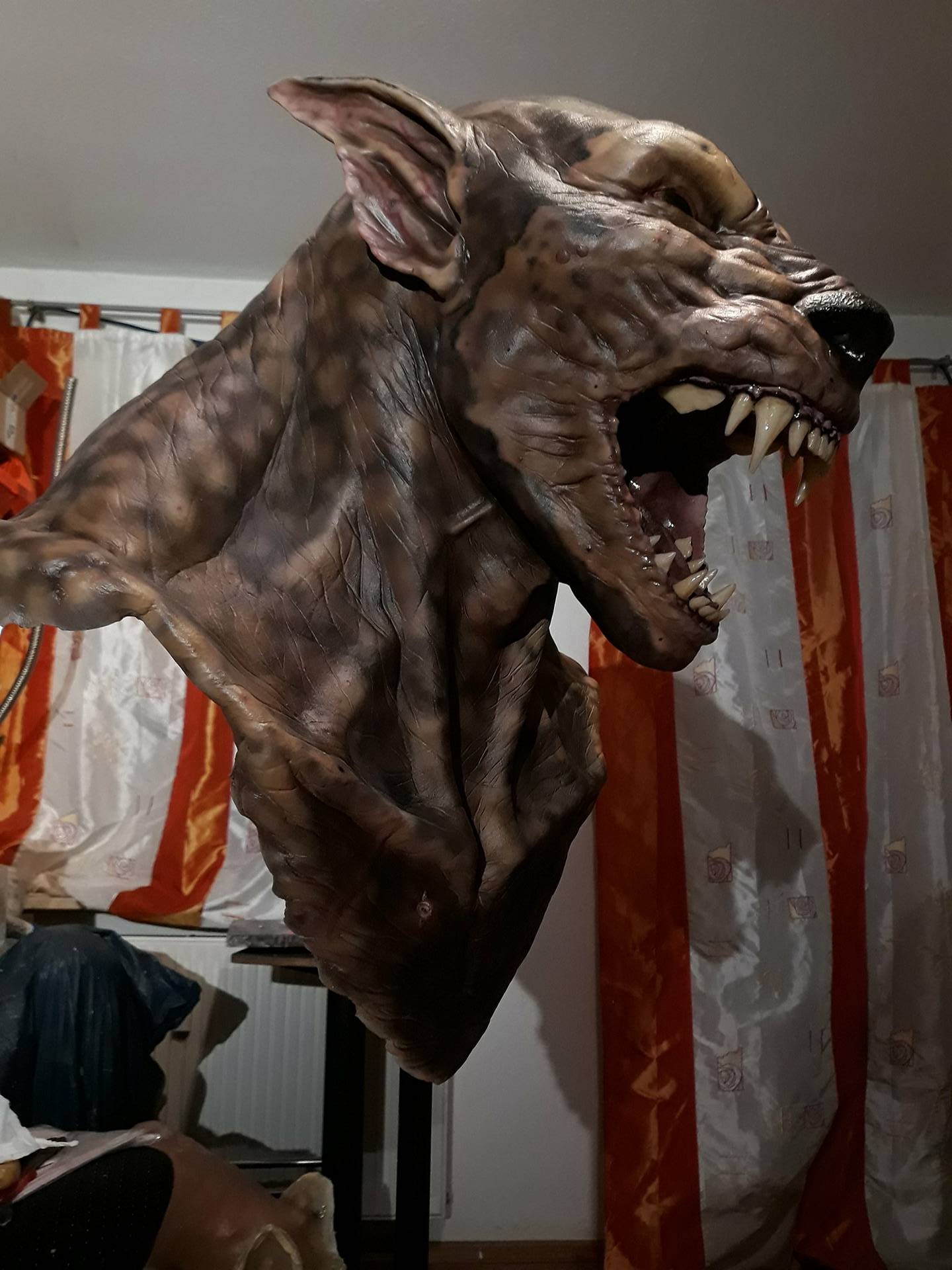 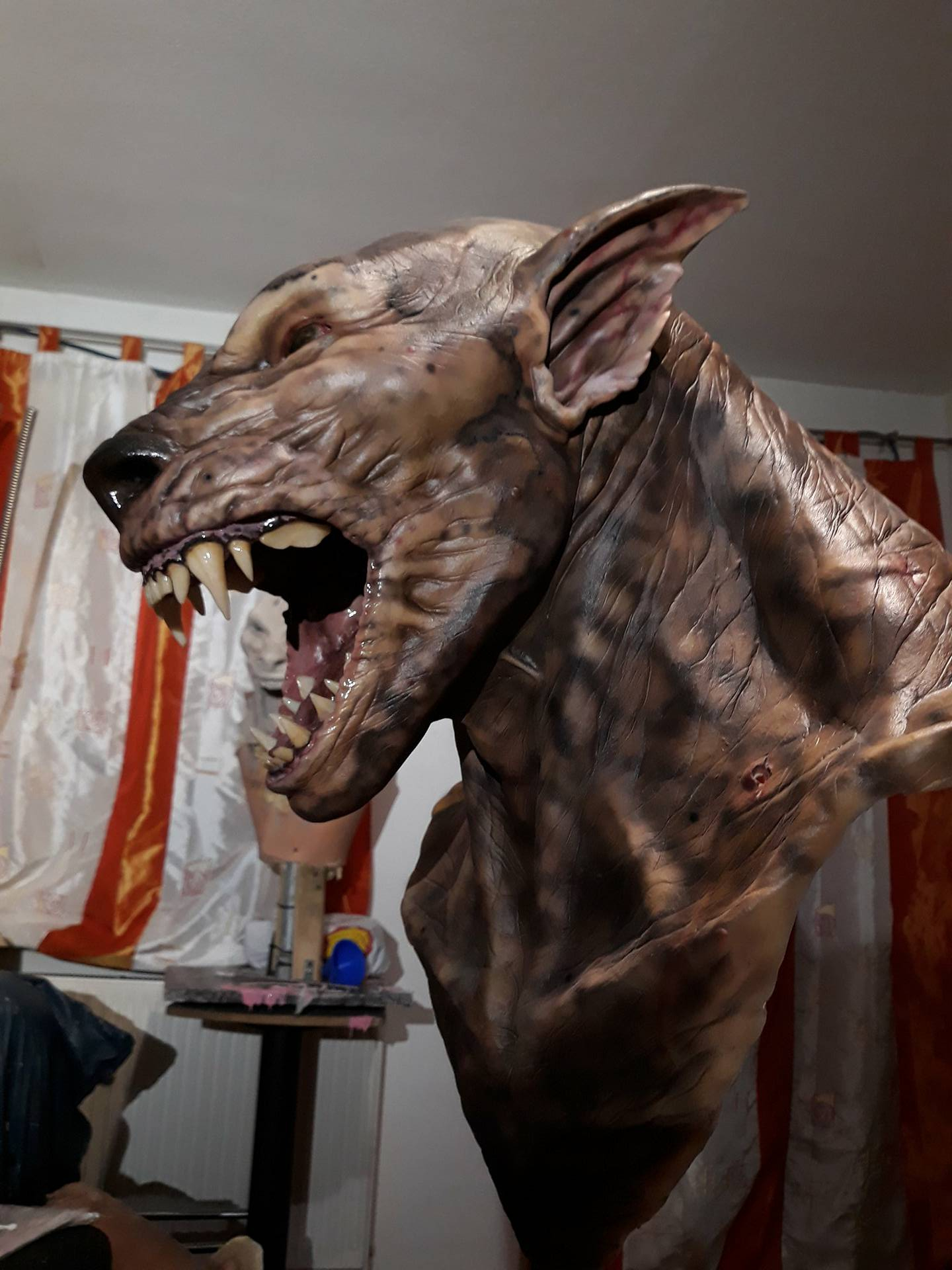 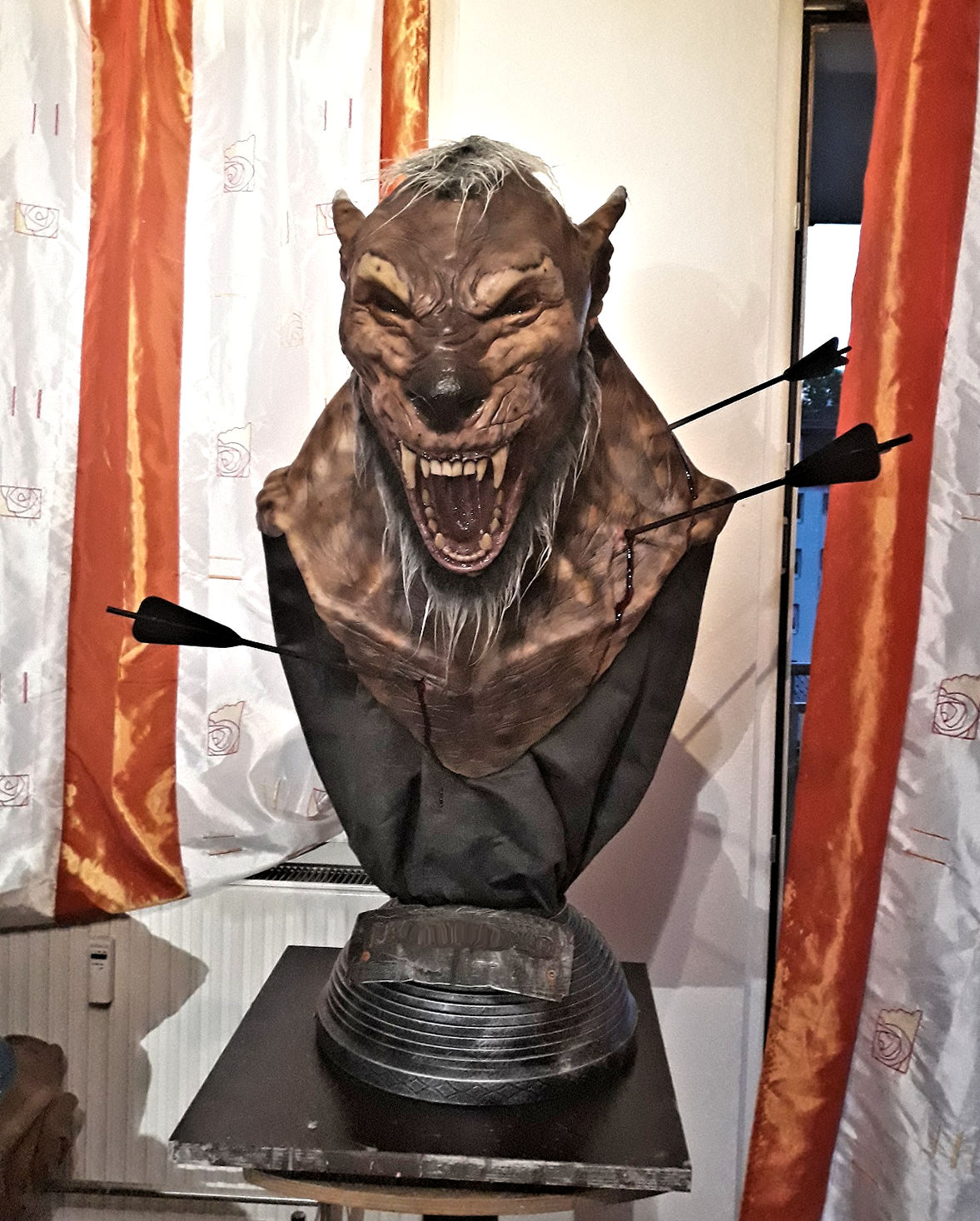 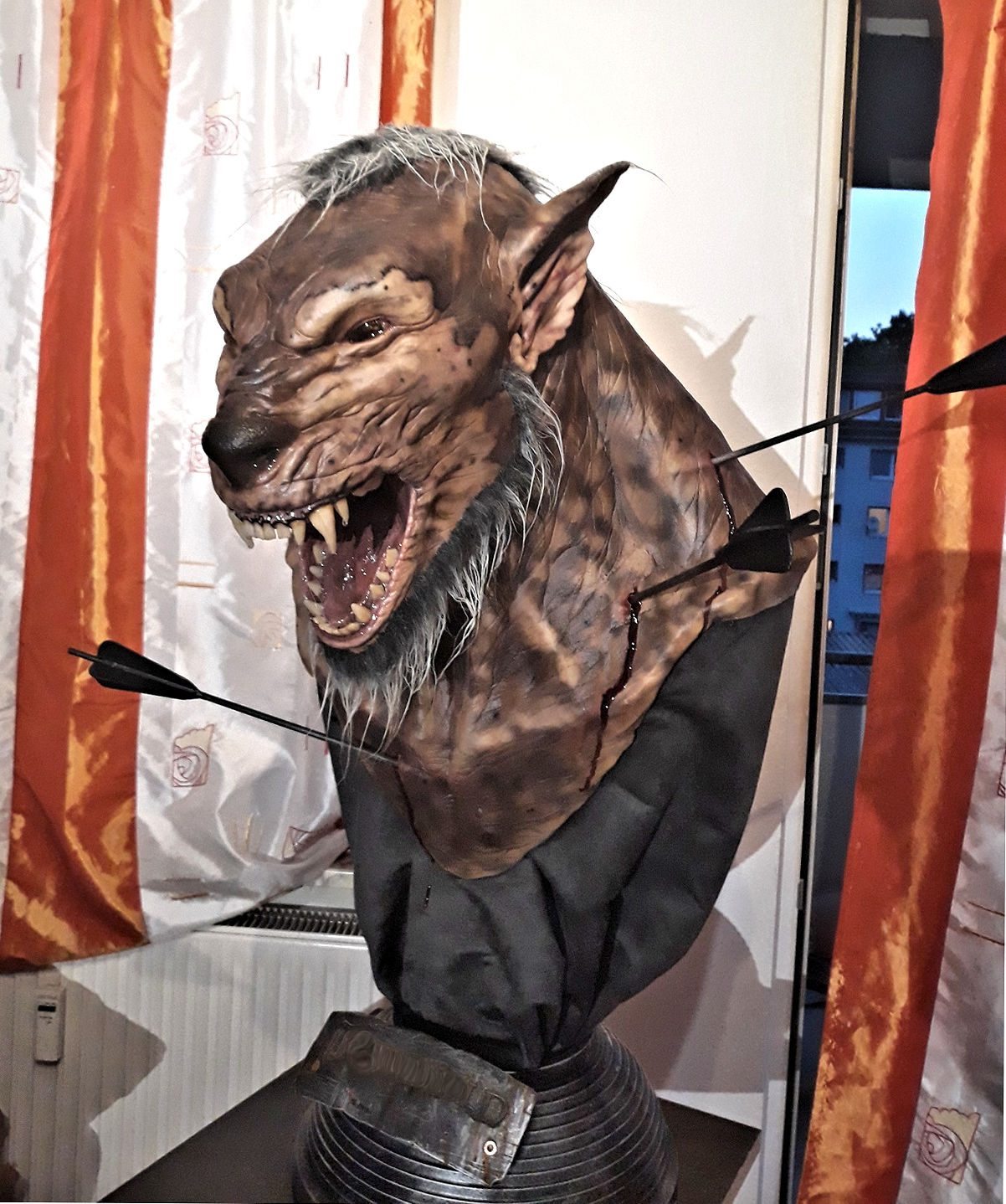 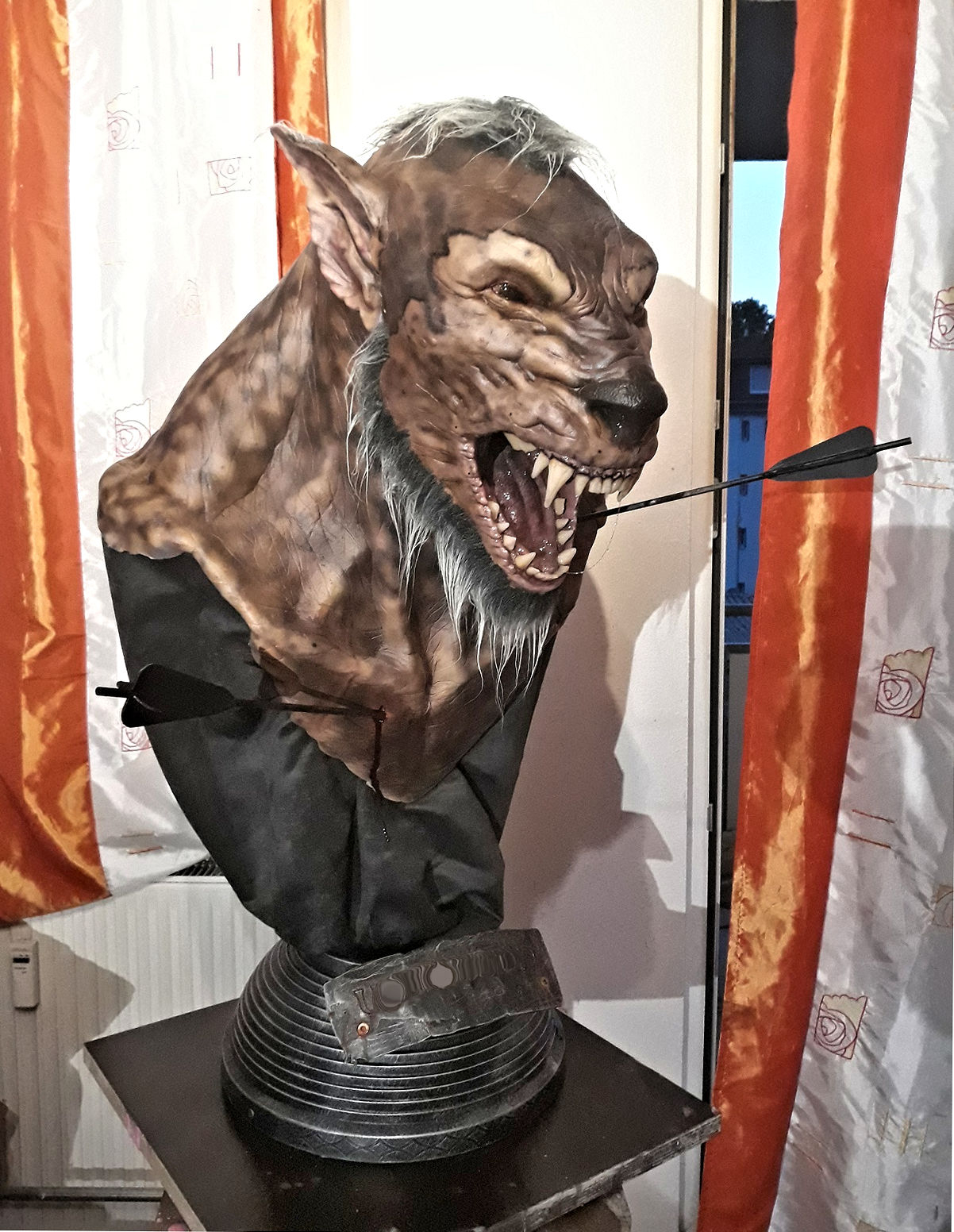 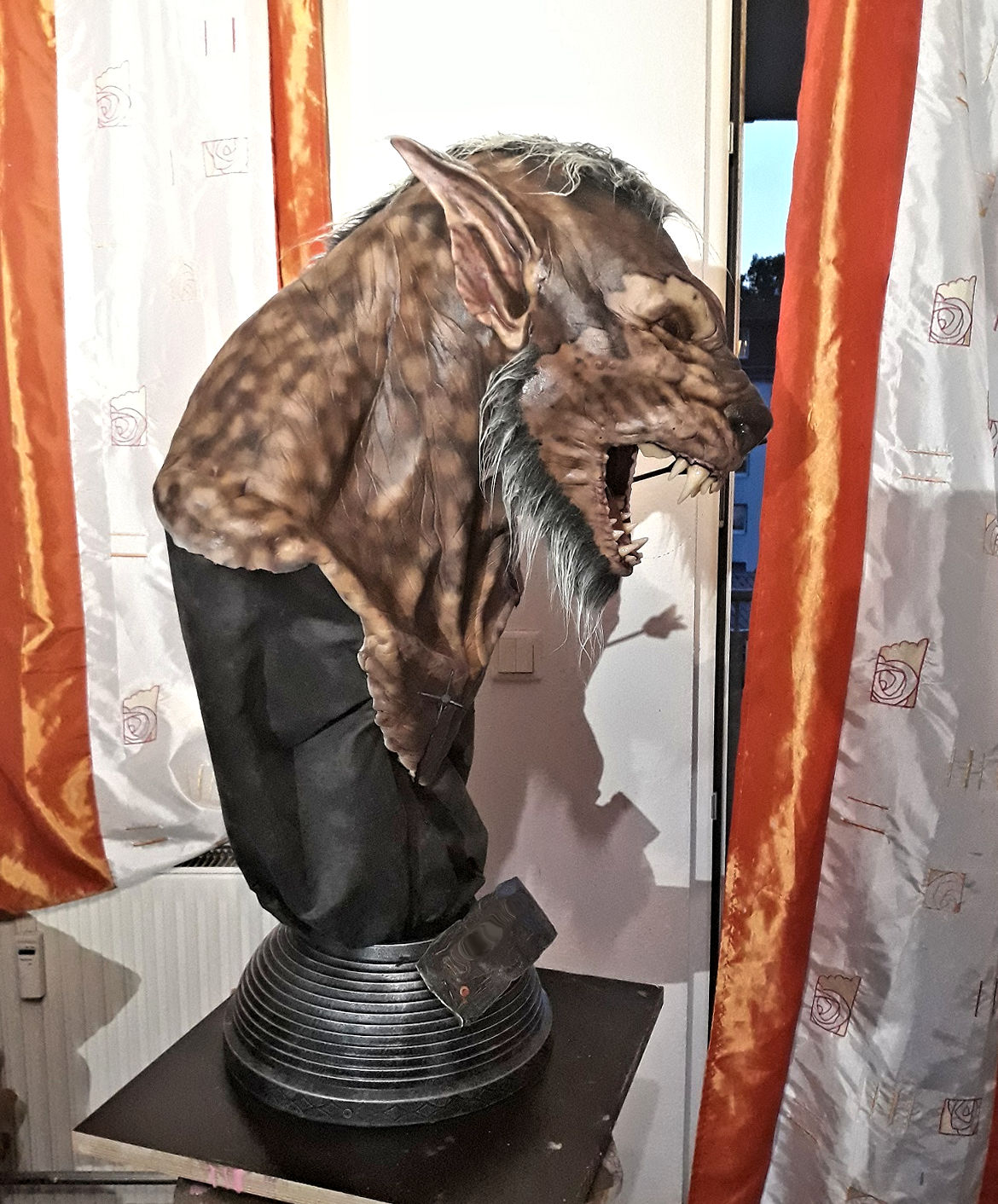 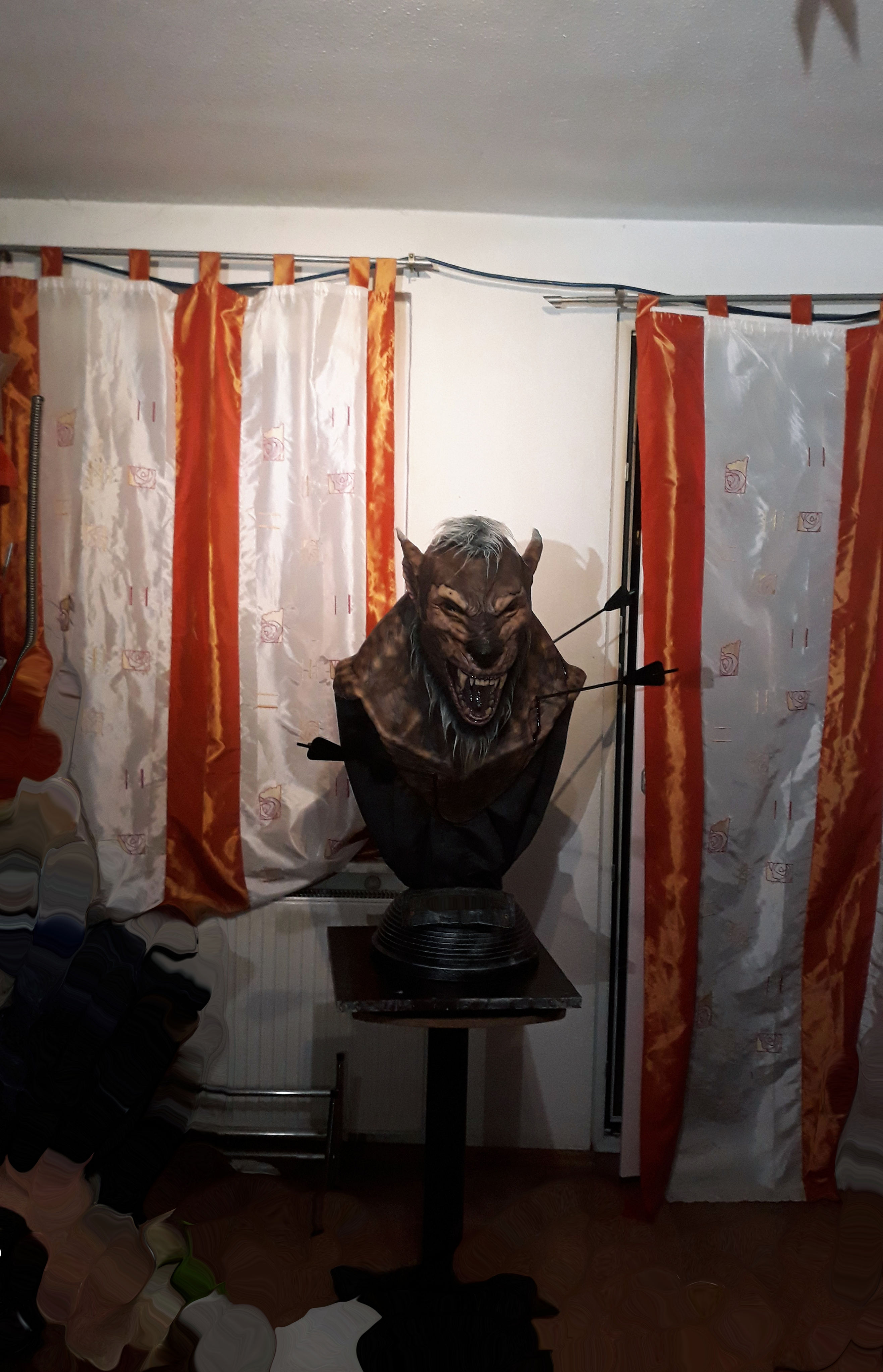 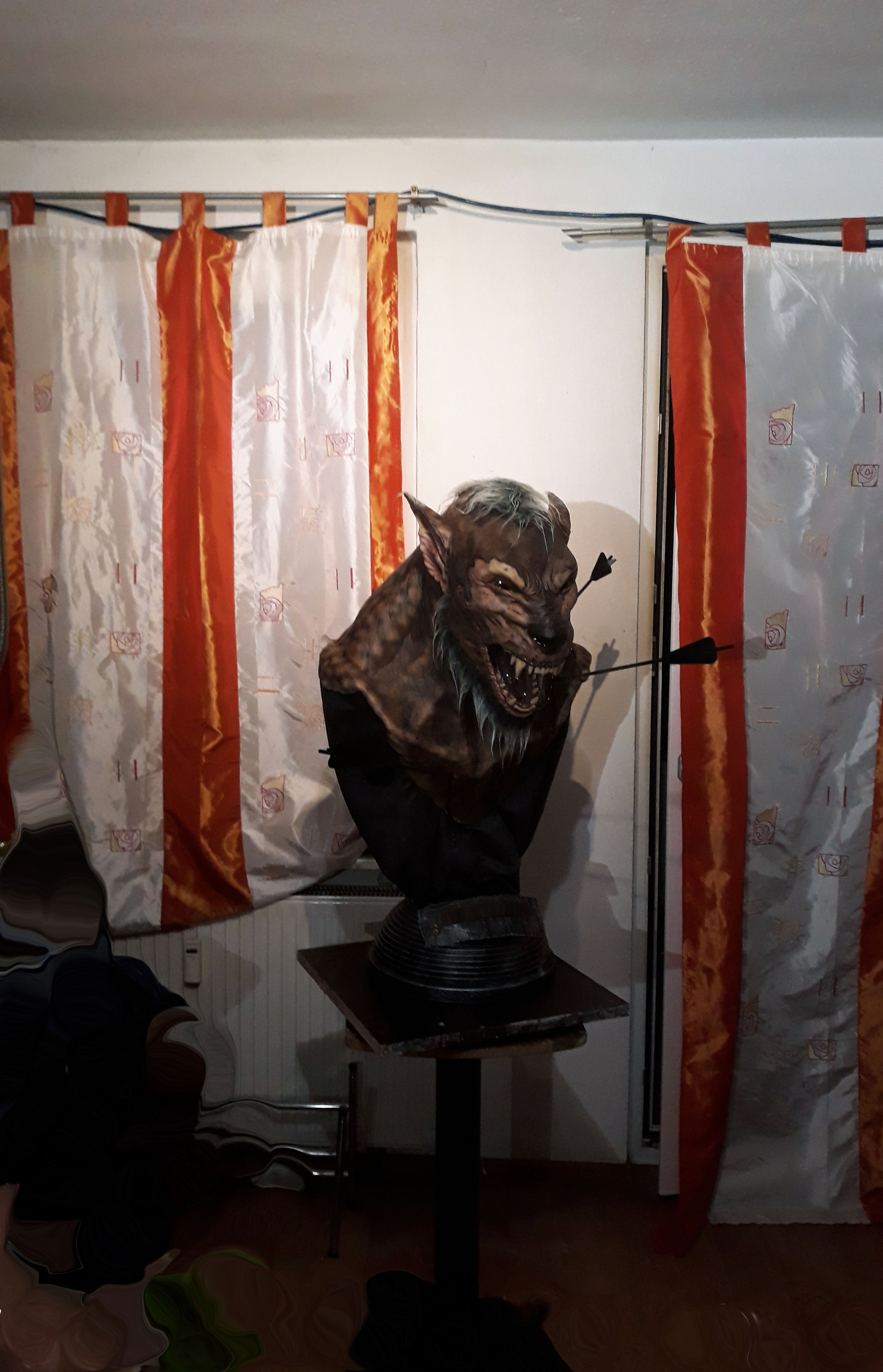 I also added self made crossbow bolts- flyer plotted out of 3 mm plastic sheet and glued them to a painted wood stick.
5 minute epoxy for wet look areas and pigmented with reds for blood added.

I hope you like it and noone is mad at me