Chris Ellerby Los Angeles Admin
July 2014 edited July 2015 in Animatronics
Greetings all,
For the last month I've been in pre-production on a big project... a large creature suit that combines both direct puppeteering and animatronic components.
I've been hard at work creating virtual prototypes of all the components, and I am nearing a final design.  As the dust is starting to settle it would seem that this is a good time to share a bit of a teaser for the project.
For most of my big projects I try and build things virtually first, as I find this has a lot of benefits.   Different scales, configurations, and measurements can be explored, moving parts and assemblies can be tested for restriction or range of motion, final assemblies can be broken down to test fit into the volume of a specific case for transportation/storage (or doorways), expensive materials are not wasted exploring and prototyping multiple concepts, precise blueprints can be generated for machining components, and a bill of materials can be generated which not only helps in sourcing parts but in budgeting.
Building the character around a three dimensional human form is also extremely important.  This helps me determine the scale of specific components like the head and arms so the final character will have the right silhouette and proportions when worn by a performer.  This also helps determine how much room and range of motion the performer will have in addition to allowing me to incorporate features for performer safety and comfort such as; ventilation, assisted vision, and quick disconnect points allowing the performer to separate from the character (without assistance) while still wearing their harness.
Another benefit of virtually prototyping the full character assembly is that it makes splitting up the work into multiple departments possible.  As the scale and dimension of the head and arms are known, sculpting of those components can begin even as the body design is refined for weight/performance/etc.  Identifying and reducing roadblocks and dependencies ahead of time is priceless. 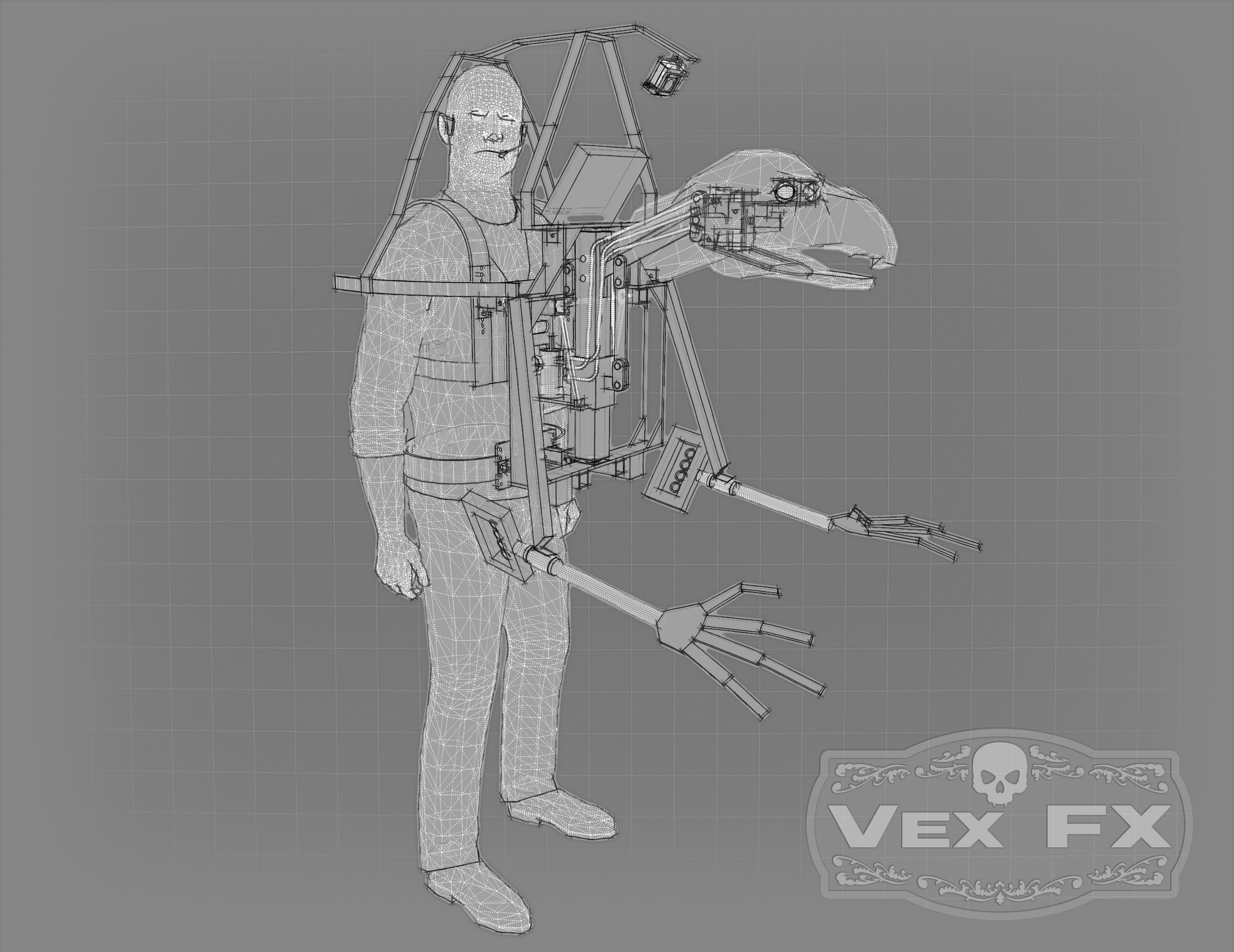 One of the fun aspects of this project is the variety of materials and methodologies that will be used.  The character's head and hands will be sculpted, molded, and cast in either silicone or foam latex.  The main body structure will be lightweight aluminum that will be welded, riveted, articulated, and bolted where appropriate.  The neck and head assembly is a complex series of linkages with direct, rod, and cable control mechanisms.  The head will contain a number of high torque servos controlling head roll, brow, snarl, blinks, and eye movement.  Servos will be controlled by a microcontroller running custom code to allow for lifelike movement even when not being directly controlled by a puppeteer.  (for display or "keep alive" scenarios)    And the wardrobe will be a combination of fabric work, beading, leatherwork, and foam fabrication.
Thankfully this project has no immediate deadline, so we have the luxury of taking our time on each phase of this ambitious project.
Once I'm finished with the next phase of testing and the design is a bit more refined I'll release some more detailed images.
Cheers,
/Chris
Post edited by Chris Ellerby on July 2015
0
«123»