Here is my attempt at an Alien Facehugger.  Pretty new to learning about animatronics and made a few mistakes but hope you like him

After fabrication of the initial plastic leg maquette it was essential to produce a metal maquette to test the fluidity of movement with the added weight and source the various materials that would be fit for purpose.  Initially one pivot point was produced to ensure the various metals would be not only strong enough but also bond well to each other.  Brass stock was used to create the top of the ‘knuckle’ pivot point with steel coated in zinc utilized for the hinge stand offs, pipe clamp, nuts, bolts and spacing washers.

At this stage there was a major technical issue with regards to attempting to solder the brass stock onto the zinc coated steel.  Some brass stock immediately held strong after plating the steel with solder, however, other pieces were extremely brittle and loose causing the metal joint to hyperextend locking the joint into an extended position.  Aligning the cable supporting disc when using Lock Tite was difficult to attain due to the position of the nuts when tightening in place.  Metal burs and sharp edges caused some fraying on the return elastic after approximately 200 bends of each joint.

After using several various flux and cleaning routines the decision was taken to still solder the brass stock into position and add a small pipe clamp to ensure there was absolutely no movement when the model was being pupeteered.  The control cable was placed in position to ensure correct alignment of the supporting discs and all sharp edges and burs were filed down to a rounded edge.

The resulting action from making all the relevant modifications was a correctly aligned cable run, a reduced risk of rips and tears in the outer skin and return elastic and a greatly reduced risk of the brass stock coming loose during operation.

The type of metal utilized taking into consideration strength and weight along with workability during fabrication, the chosen metal was mild steel.  To achieve the desires angle of the protruding legs the steel had to be scored initially with an angle grinder which was effective, however, the metal became very brittle as it was bent into position whilst it was too hot and snapped.

The decision was taken to allow the metal to fully cool down after grinding and not scoring too deep in an even line.

The end result was a much stronger angle bend that stayed in position to support the legs.

One hand control framework was assembled without solder and tensioning cable return was attached to check fluidity of movement prior to attaching the rest and finalizing with crimps.

The decision was taken to dissemble the thumb trigger mechanisms by de-soldering the joints to remove the cable housing exposing the bare cable then re-attach.

This modification resulted in a cable that moved freely within the pipe.

Four steel discs per leg were initially required to support the return elastic and cable run.  This disc required subsequent holes to be drilled in one as a template then accurately drilled out using the drill press.  Brass stock was cut into strips and supporting tubes were also cut, flux was added and soldered into position to enable the return elastic to be attached. The flux was removed with a damp cloth.  These were then soldered onto the steel hinge stand offs and further supported with the addition of a small pipe clamp.  Steel threaded rod was measured into the desired lengths for each leg segment and an angle grinder was used to cut them accurately, removing all burs with a hand file.

A scale cardboard template was used to achieve the correct shape in the mild steel.  Using an angle grinder the metal was scored allowing it to bend into the desired shape and angles to receive the legs.  Unnecessary metal in panels were cut into the bottom of the chassis to alleviate some of the weight. Holes were drilled into the sides of the chassis ready to receive the bolts from each leg.

Copper pipe was measured and cut into the desired lengths using a 15 mm pipe cutter.  L and T shape and copper fittings were used to achieve the correct shape and bespoke length.  Holes were measure into the middle and top supporting pipes prior to soldering and holes were made to receive cable tensioning mechanism housing brass stock.   The brass stock was cut into adequate lengths and placed into the pre-drilled holes.  Flux was then added to the pipe joints and brass stock housing and placed on block to be soldered into positon. All flux was removed using a damp cloth and the brass stock housing was cut flush with the copper pipe using a Dremel tool.  All metal burs were then removed with a small hand file.

Brass stock two sizes below the brass housing was cut into the correct lengths and cable was passed into the pipe and returned back through to create a finger loop.  These were then fed into the housing and two compression springs per finger was added to assist with the cable return.  Locking nuts were added to the pipe to prevent the springs sliding off and the cable was crimped into final position.  Cable was then fed through the top copper bar pre-drilled holes crimped to the existing finger control cables under slight tension.

The mechanism was clayed up to achieve the desired shape and texture.  Three trials were undertaken to create an effective skin shell with an adequate negative space for the mechanism.  The final shell was produced with a simple latex slush mould that was used to create liquid latex sleeves and very thin nylon tights were added to increase the overall durability. Nails were produced using mouldable plastic Coolmorph and the entire leg was airbrushed, building the colour up in thin washes to achieve the desired colour and shading.  The nails had three coats of nail varnish added for extra strength and effect. 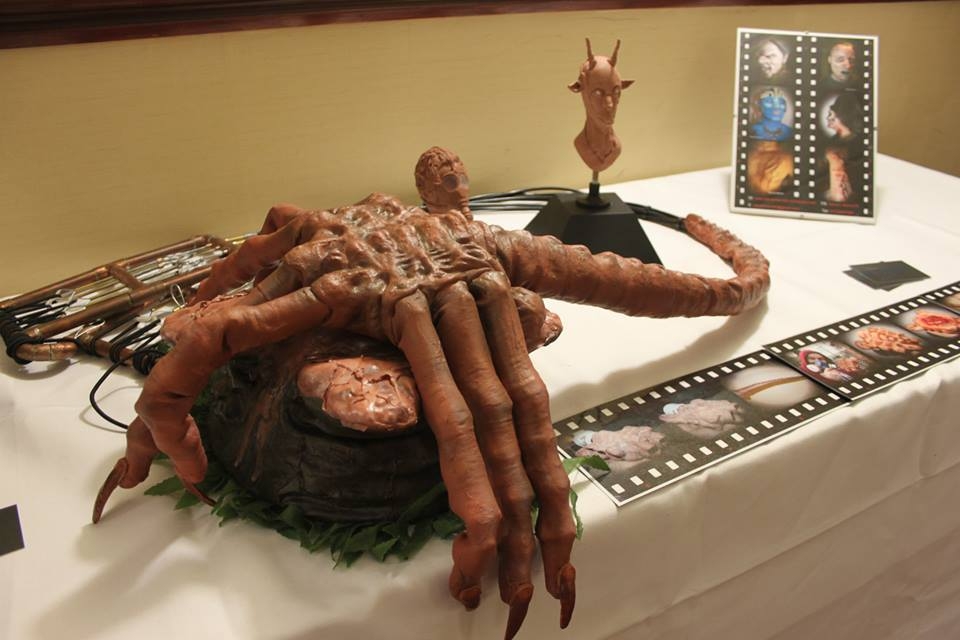 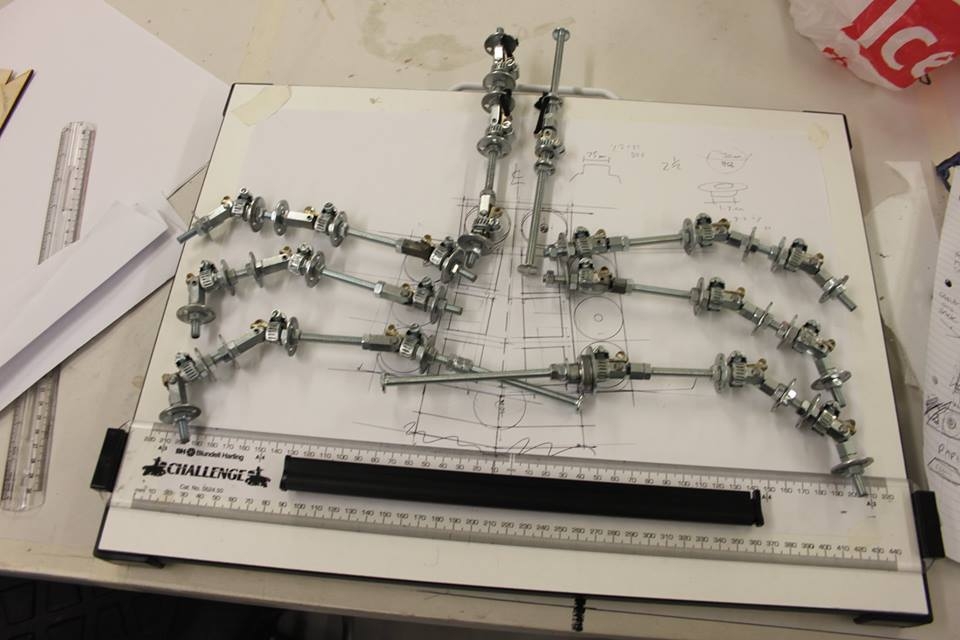 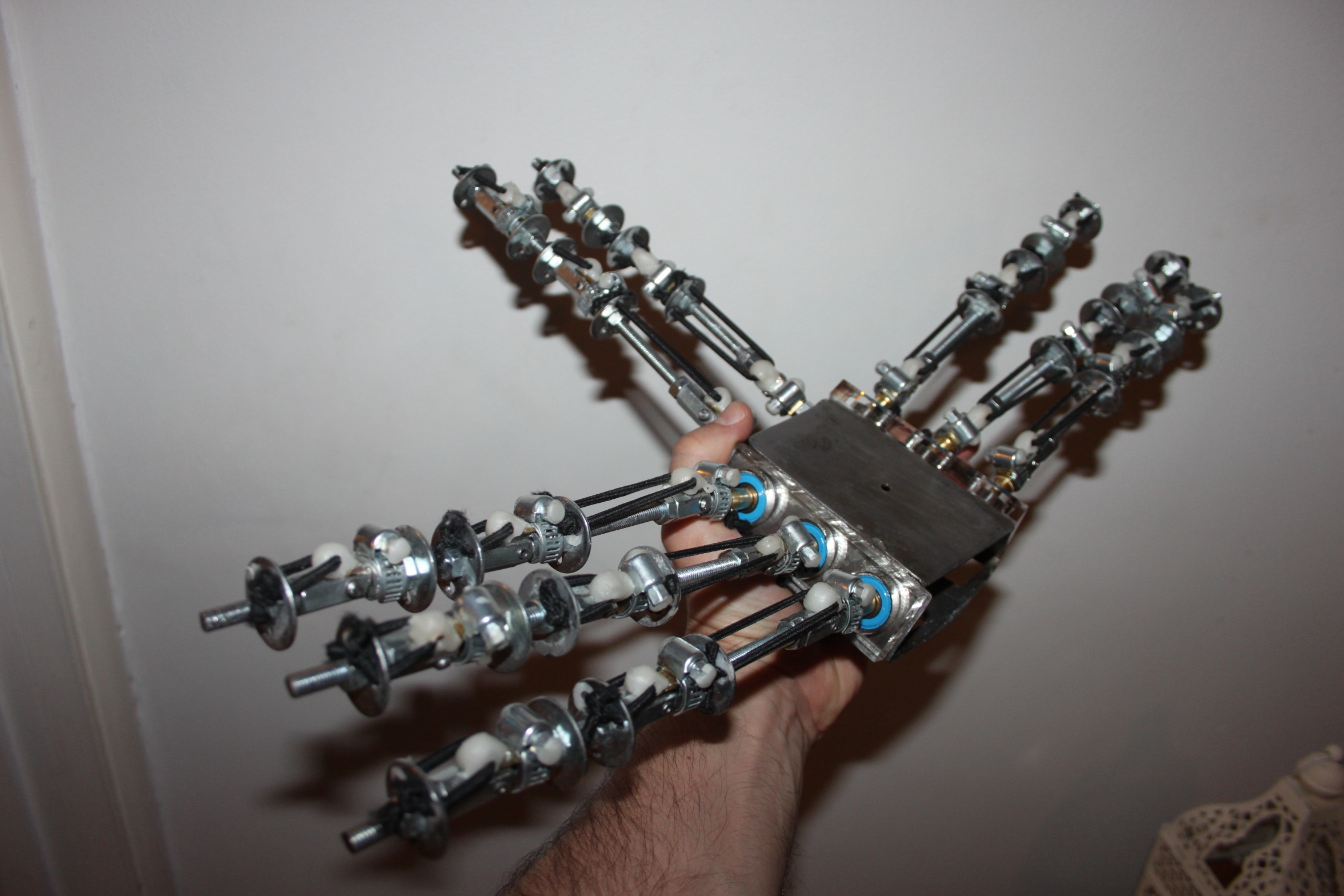 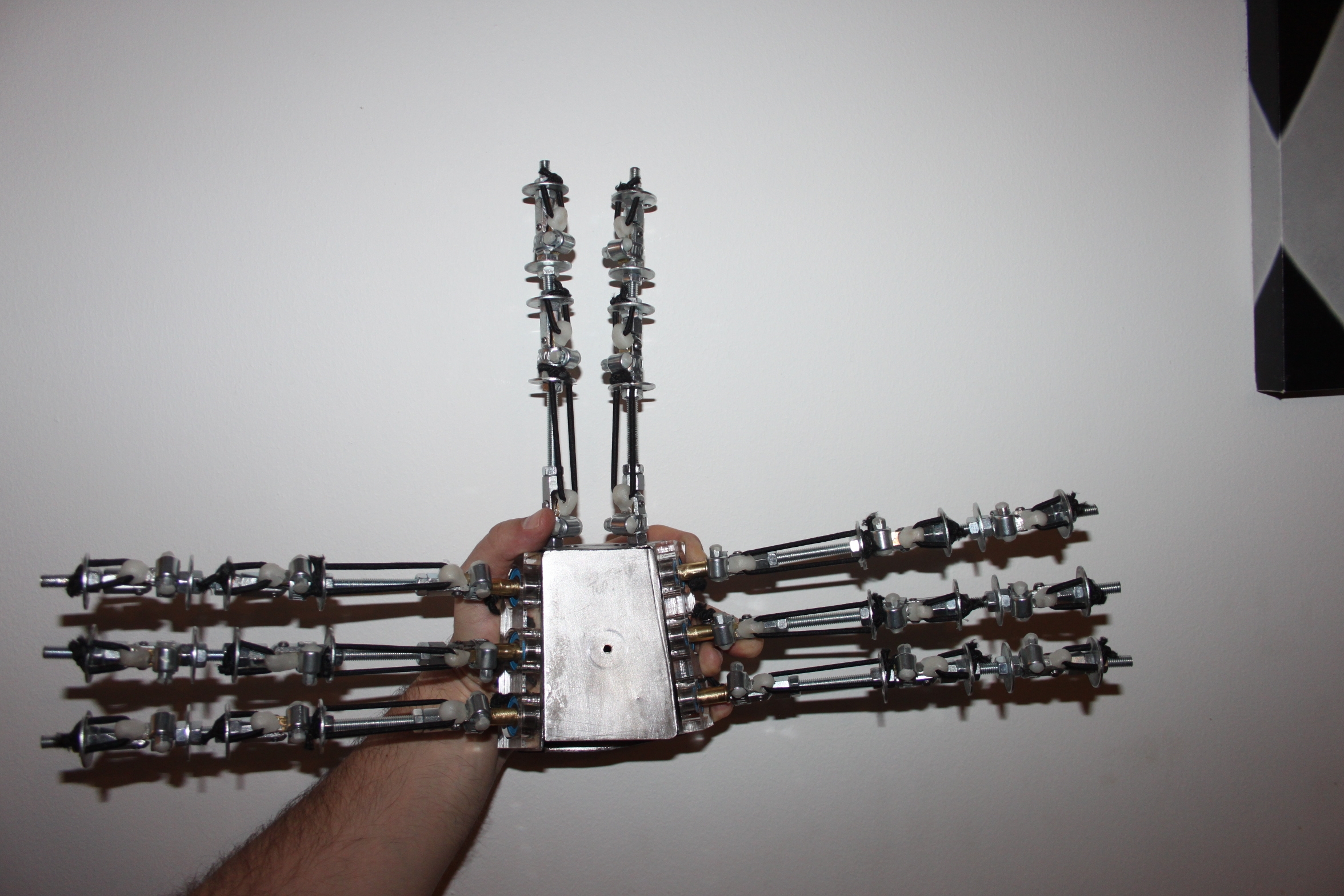 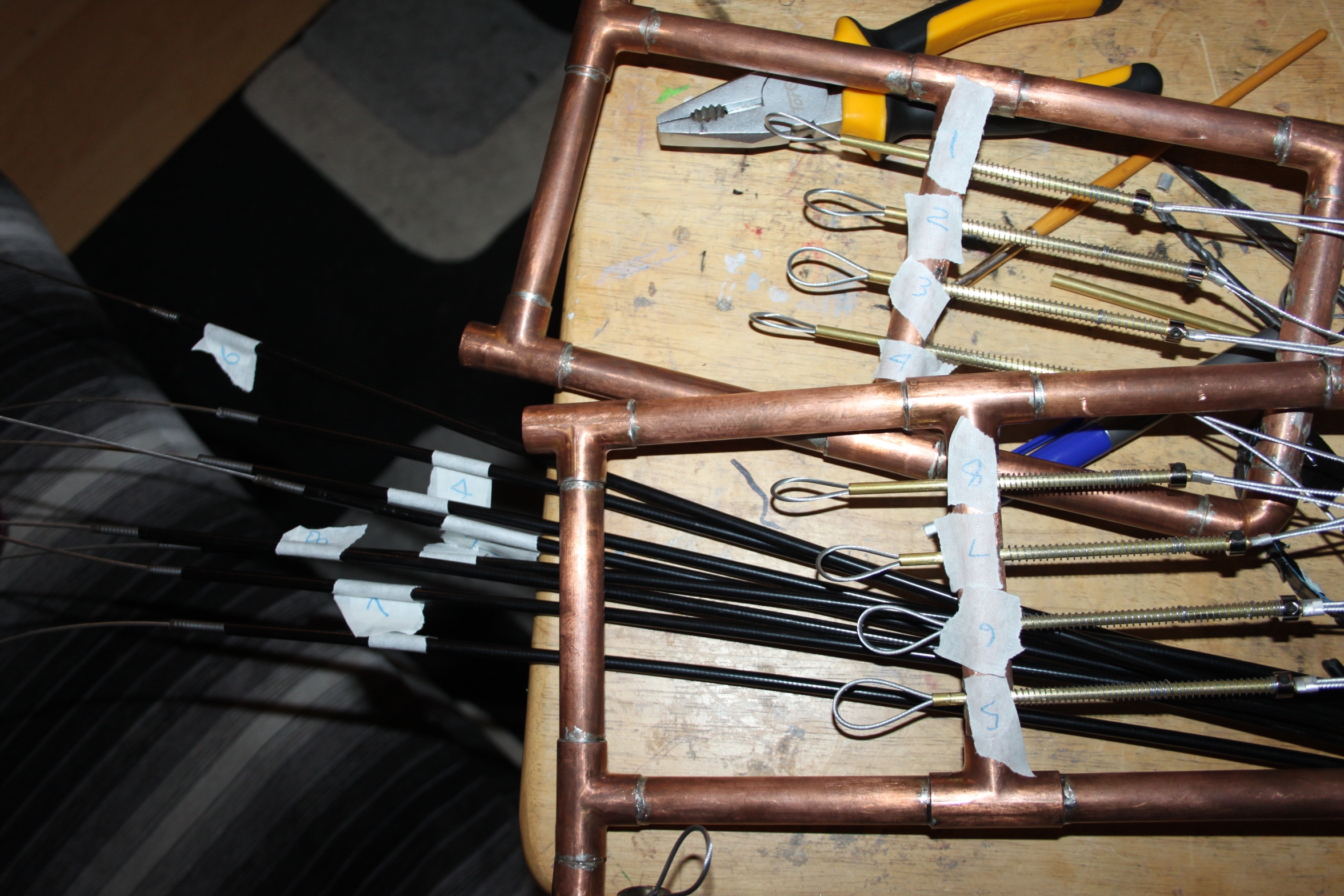 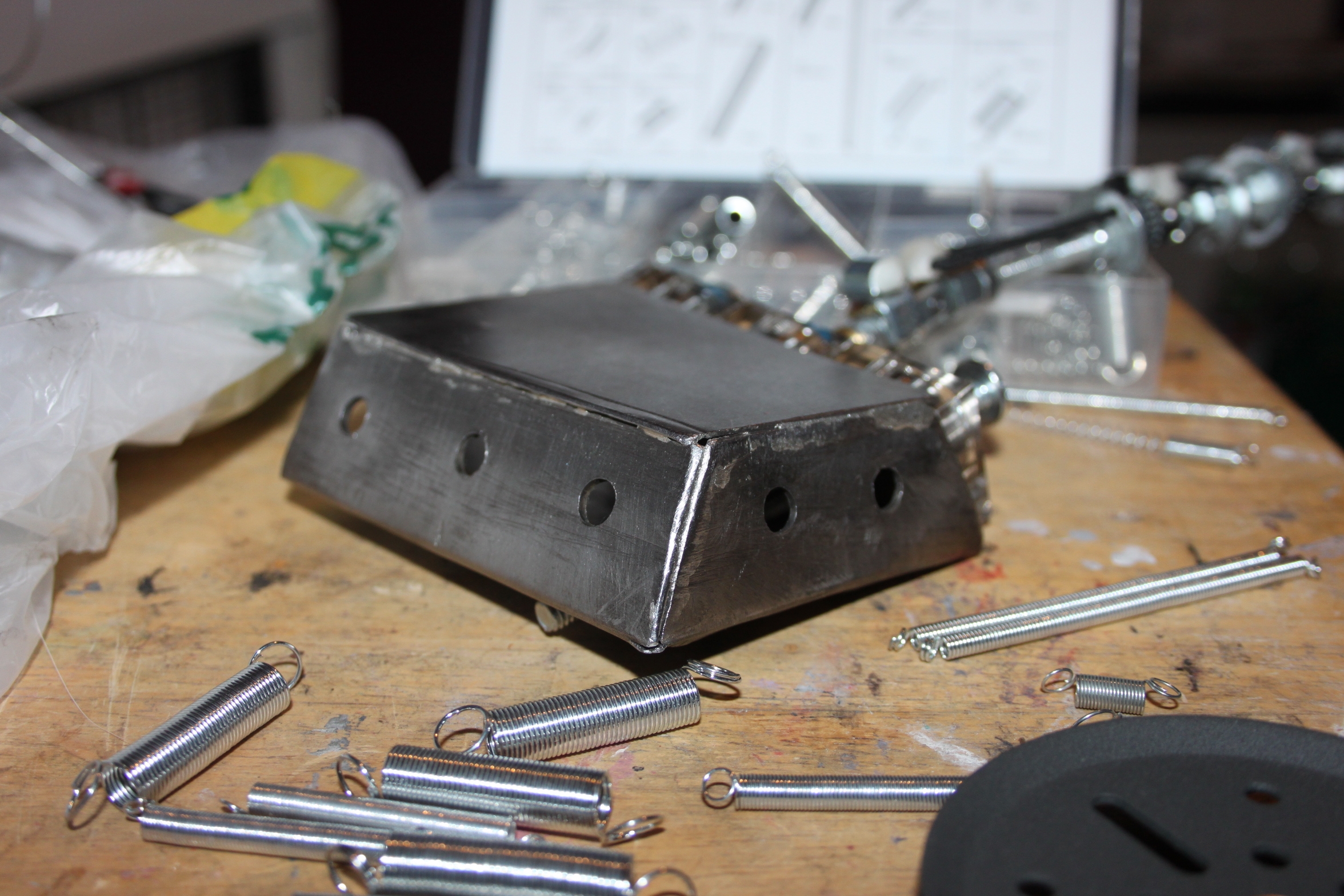 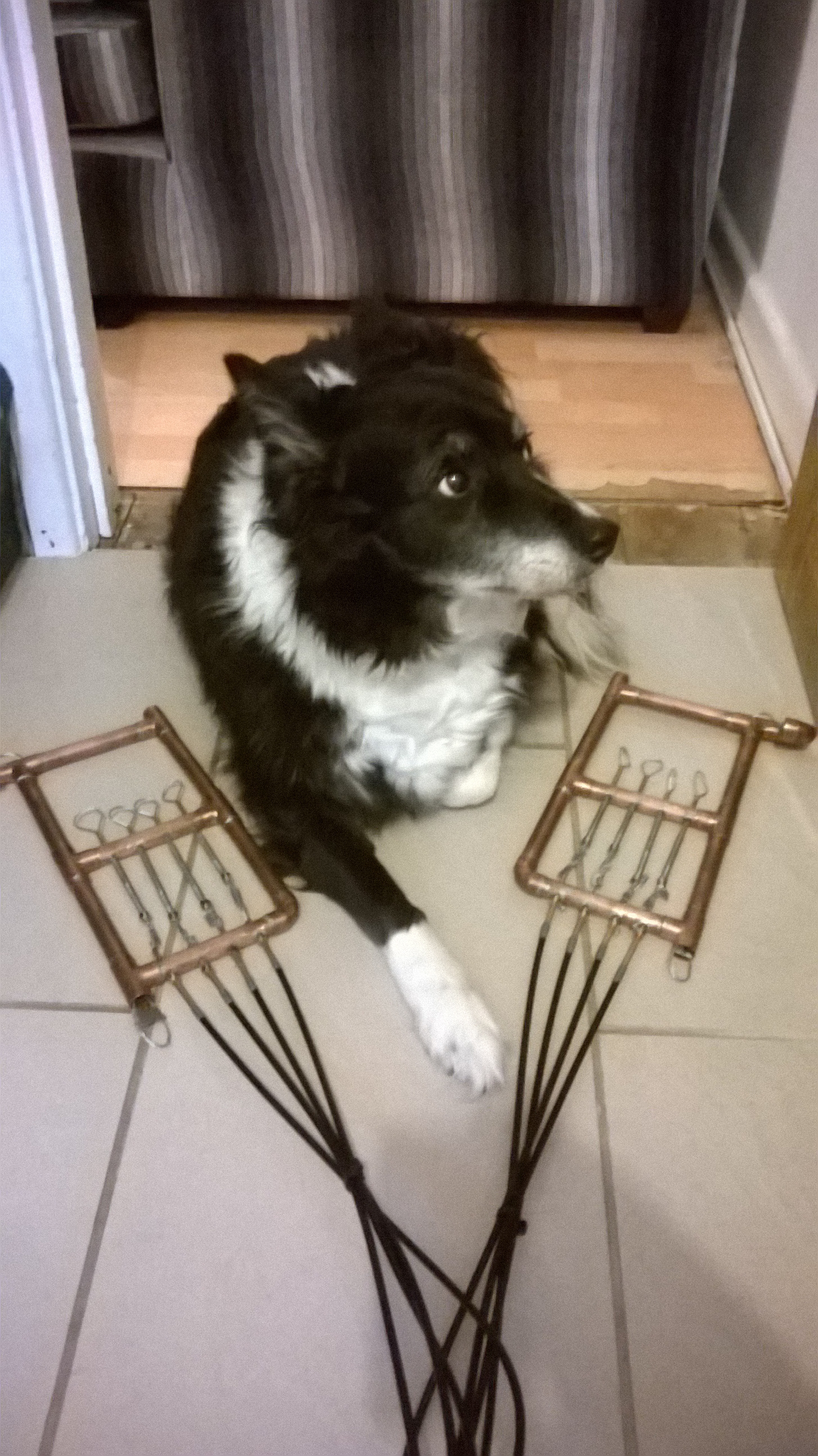 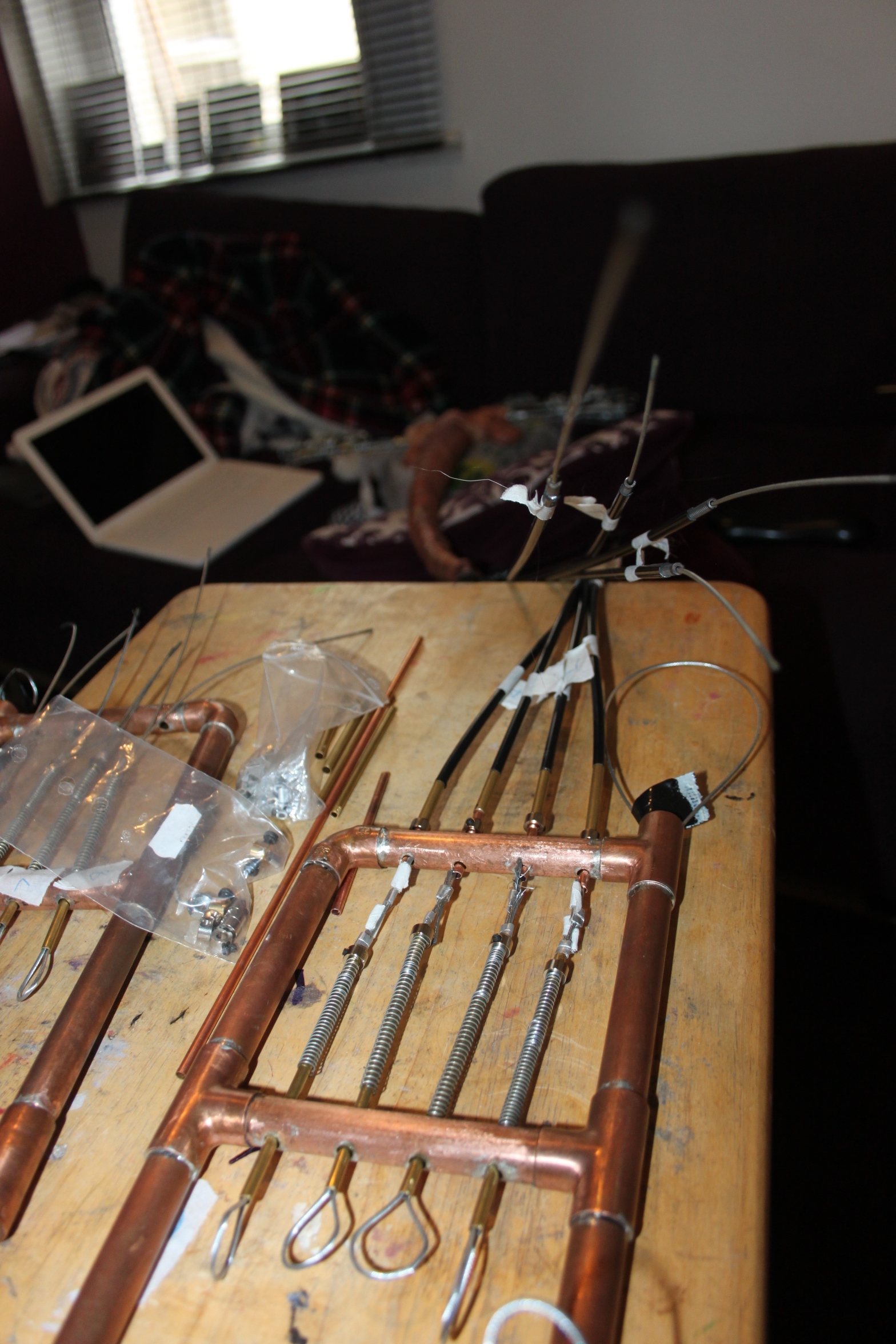 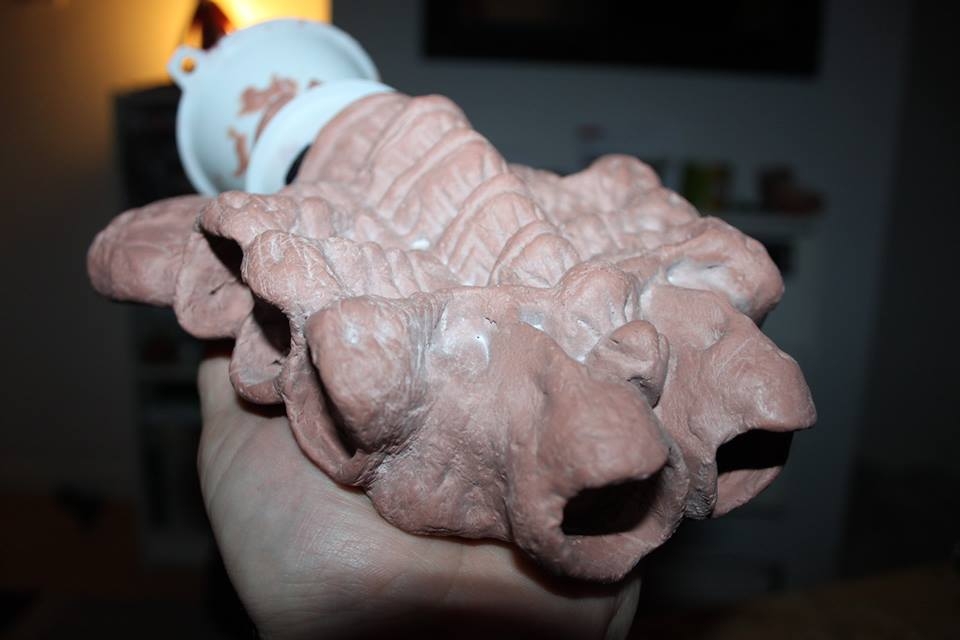 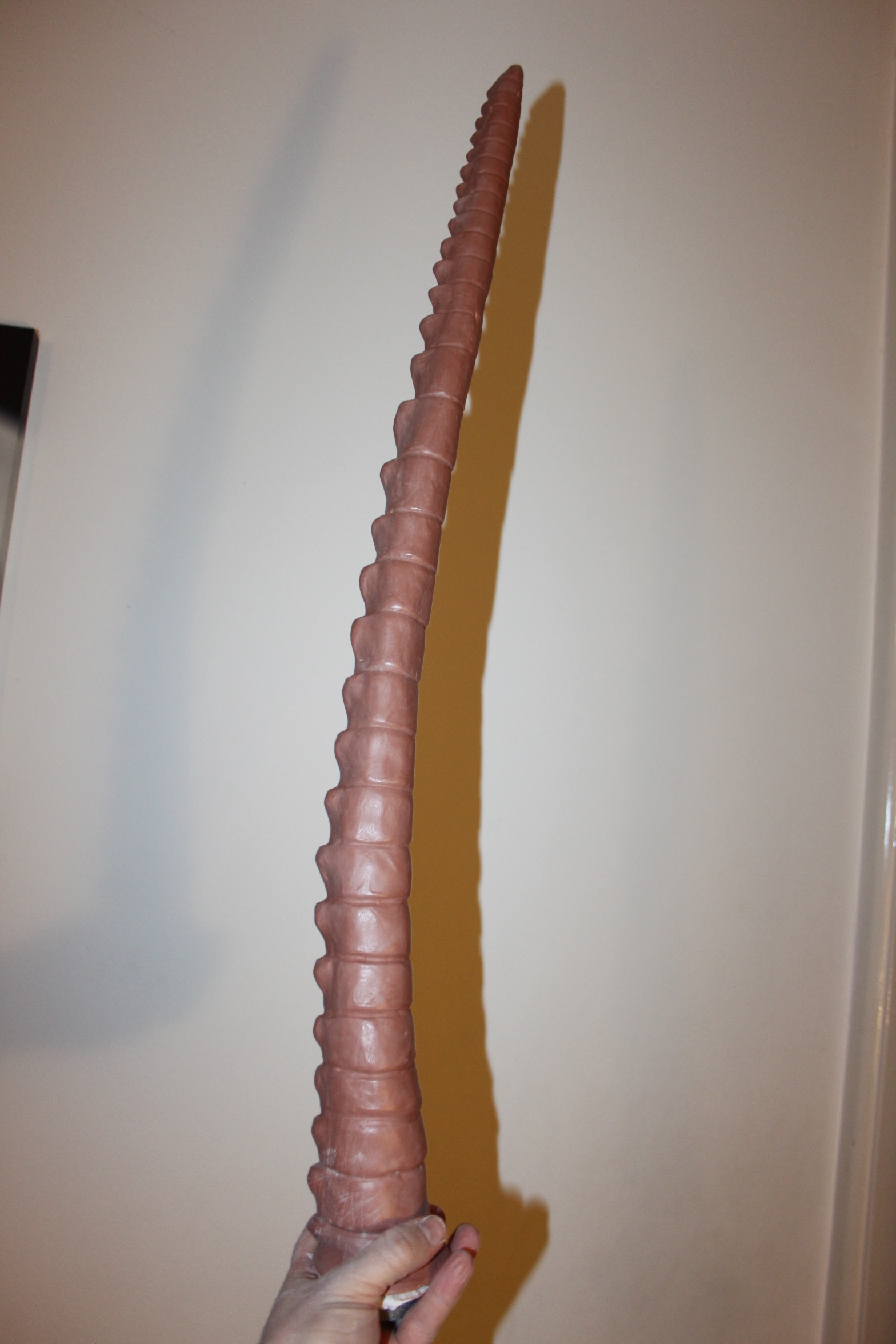 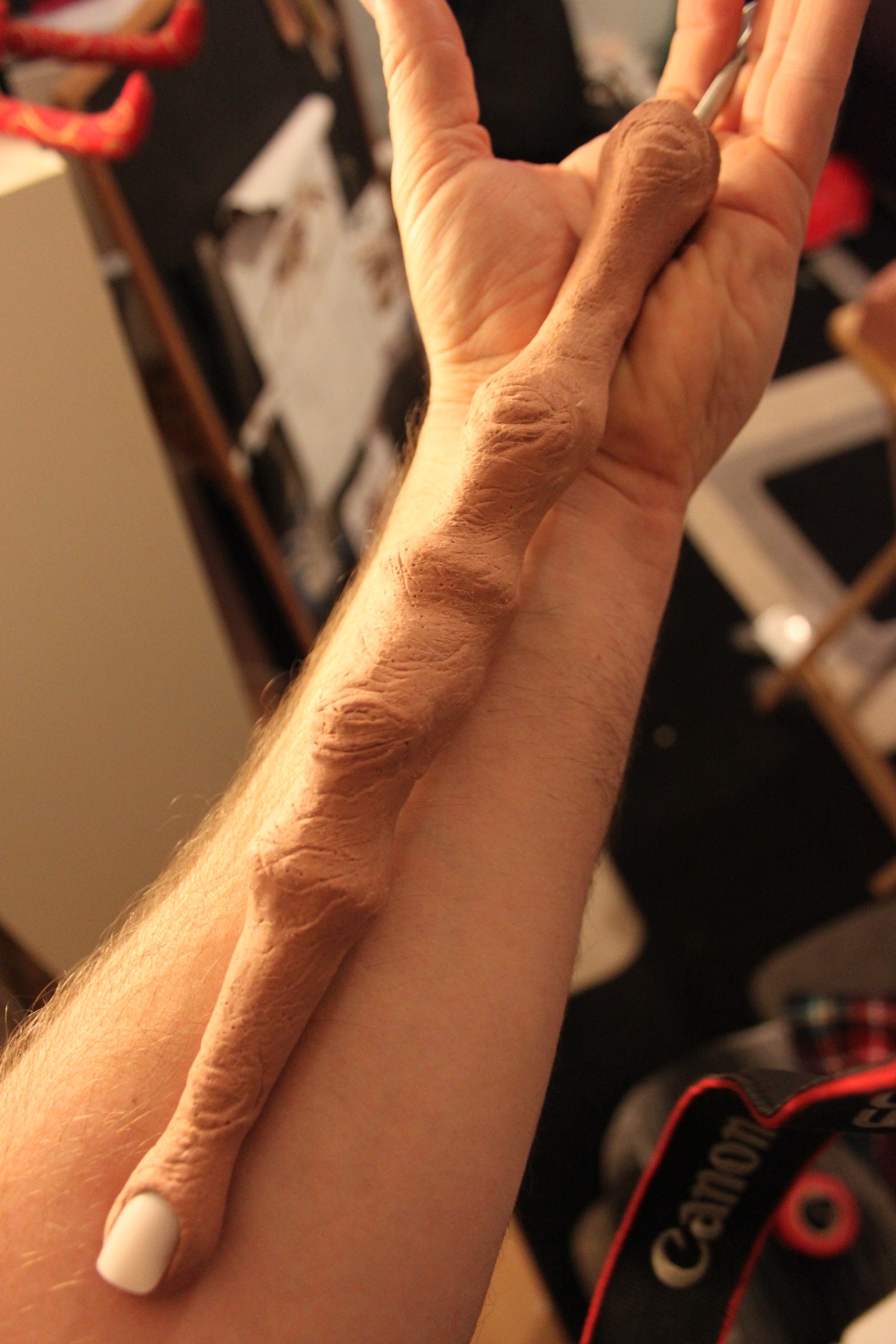 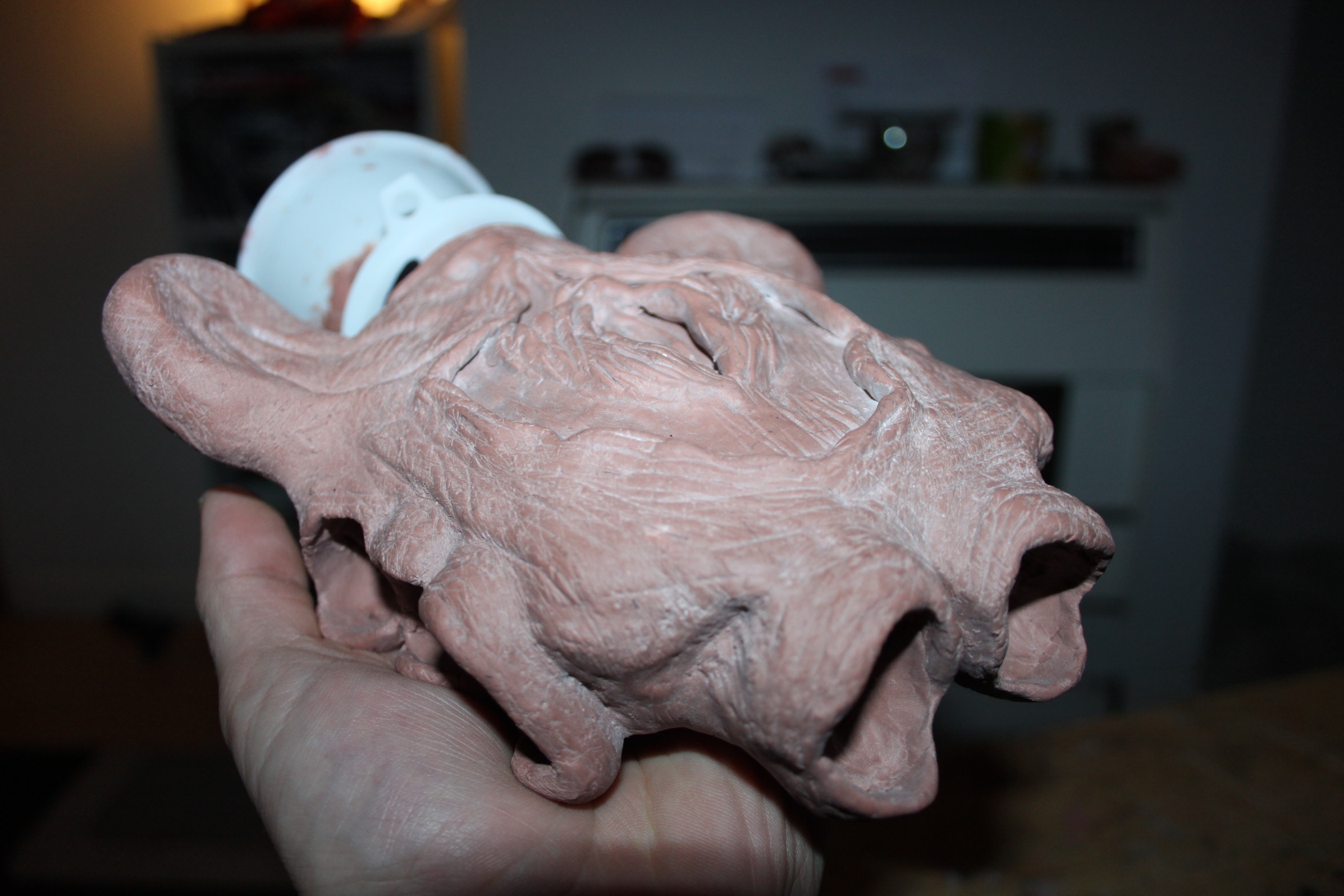 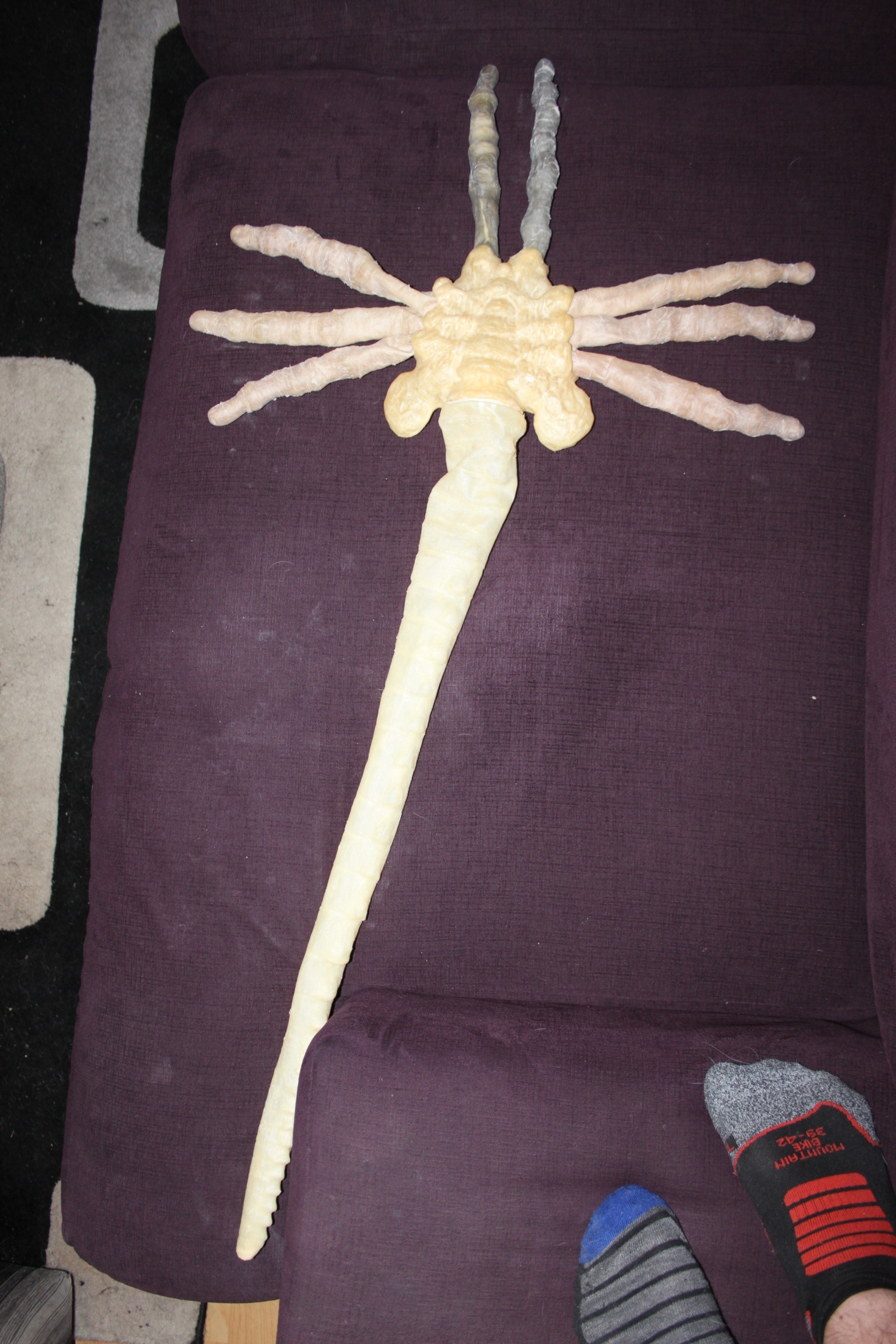 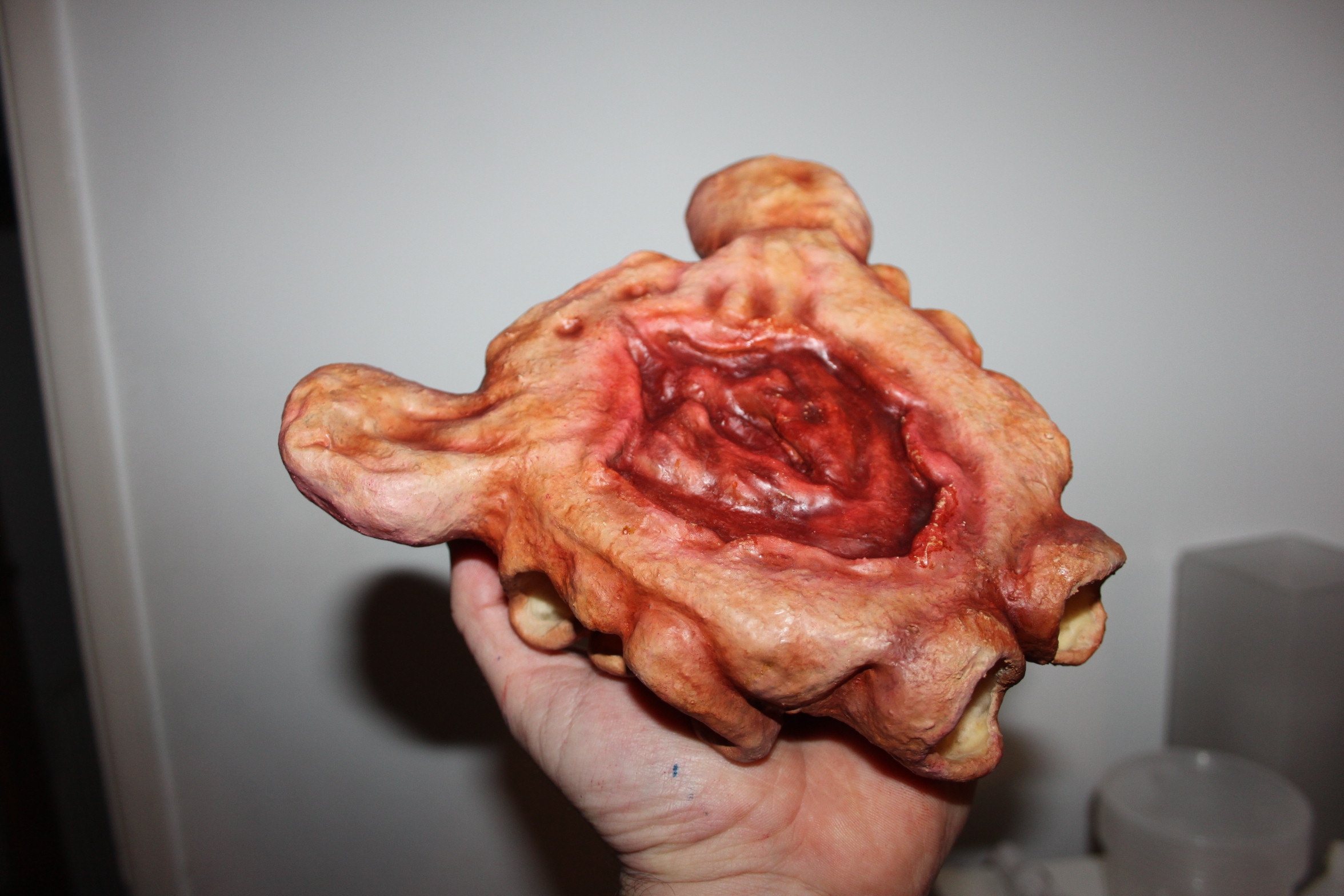 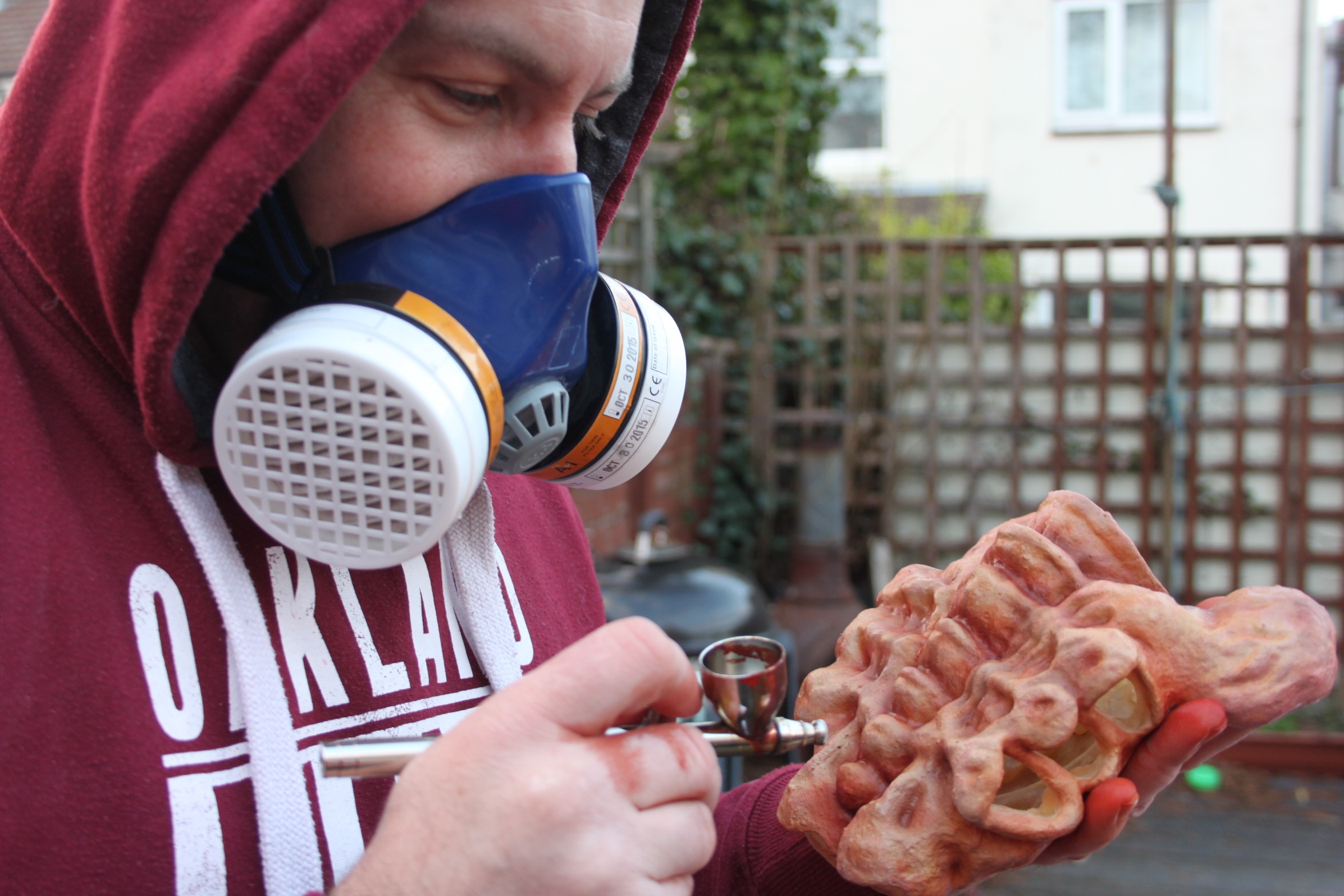 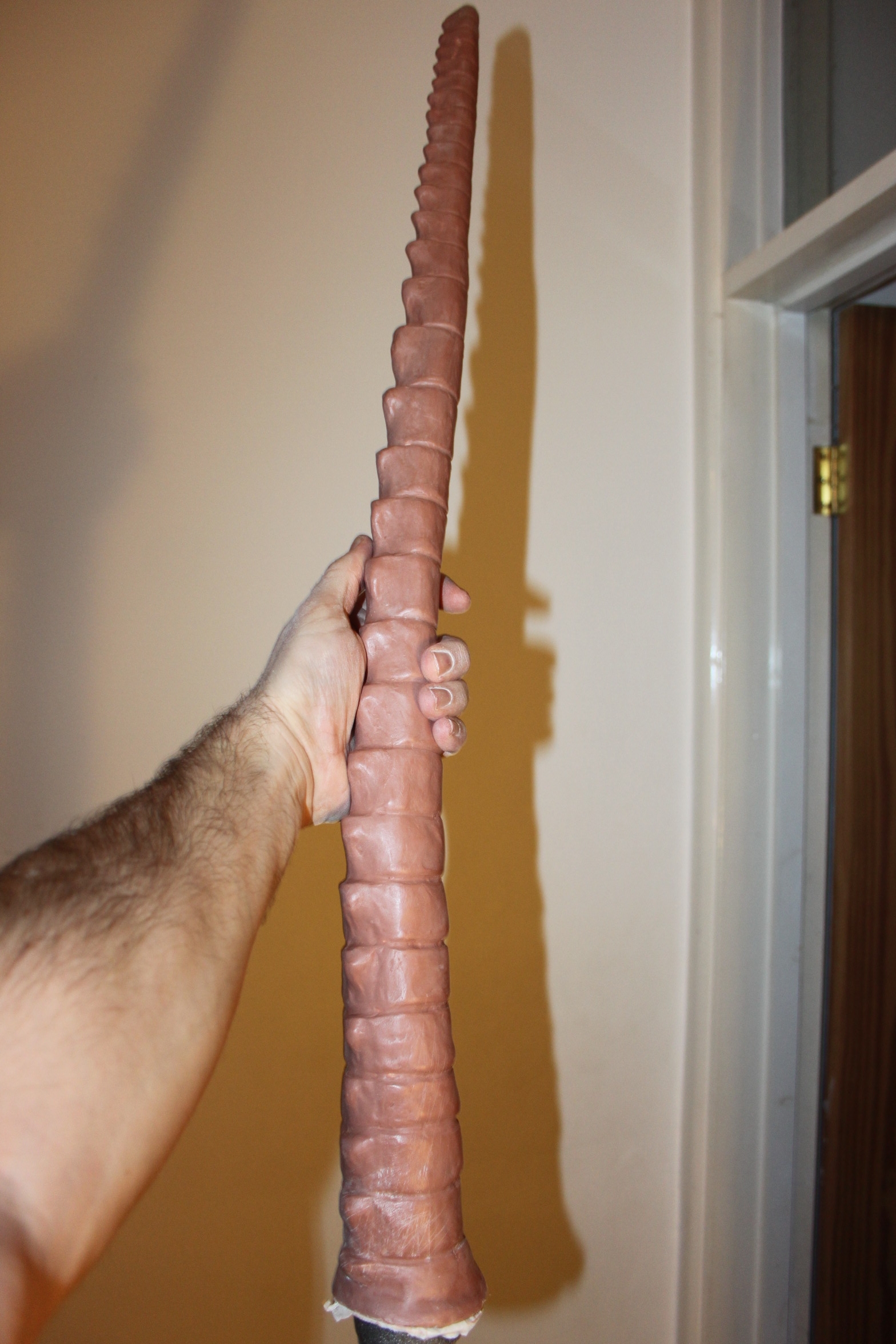 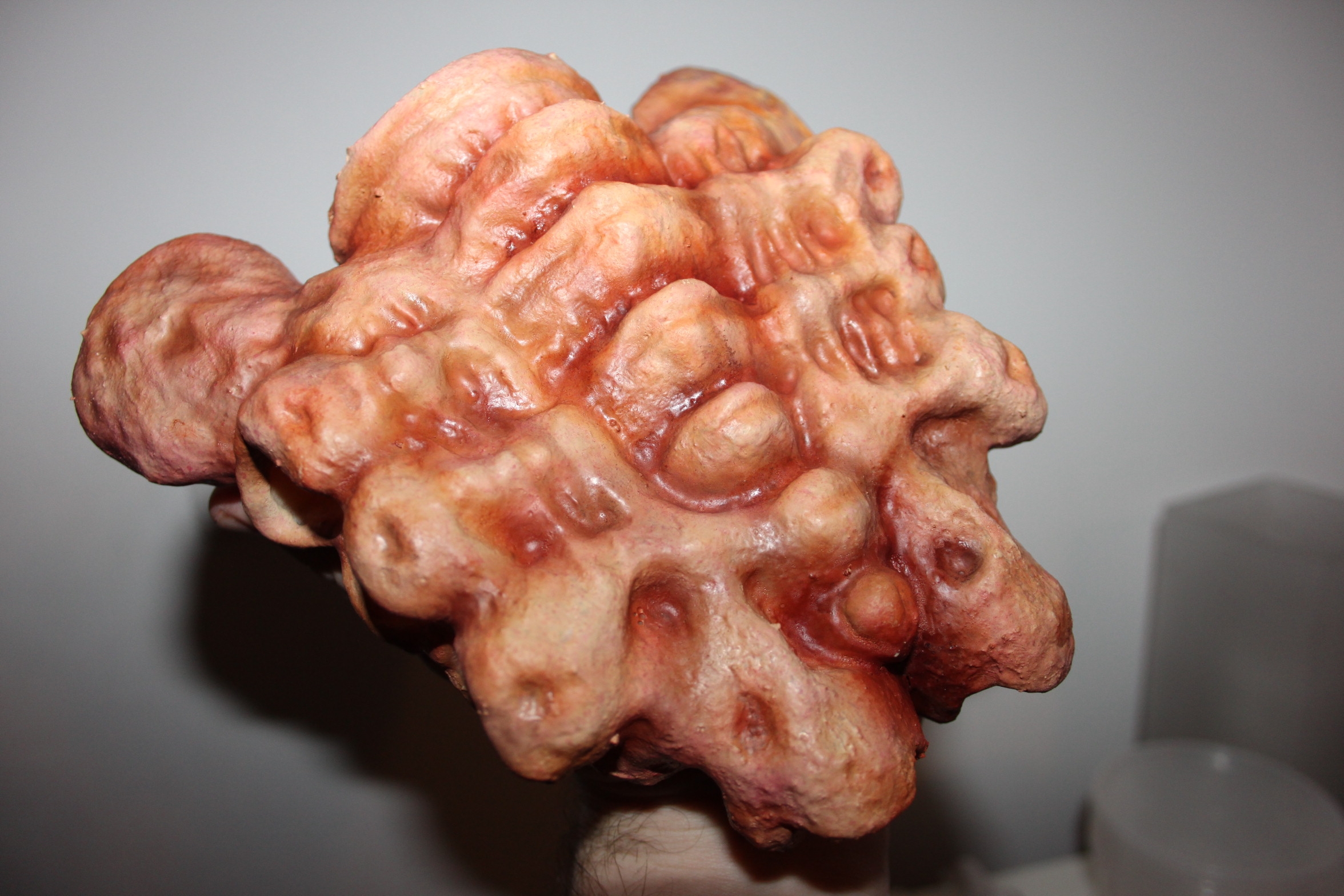 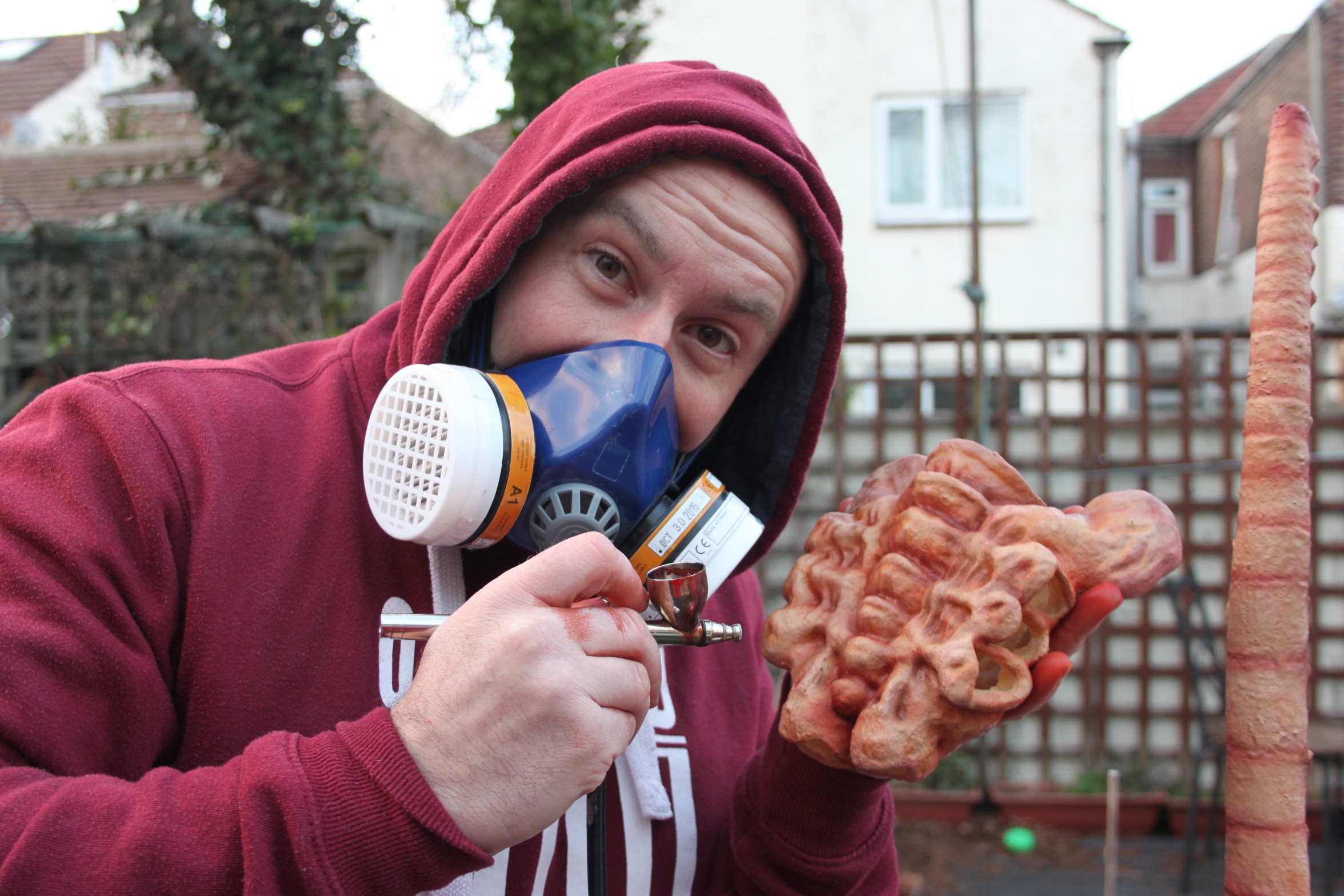 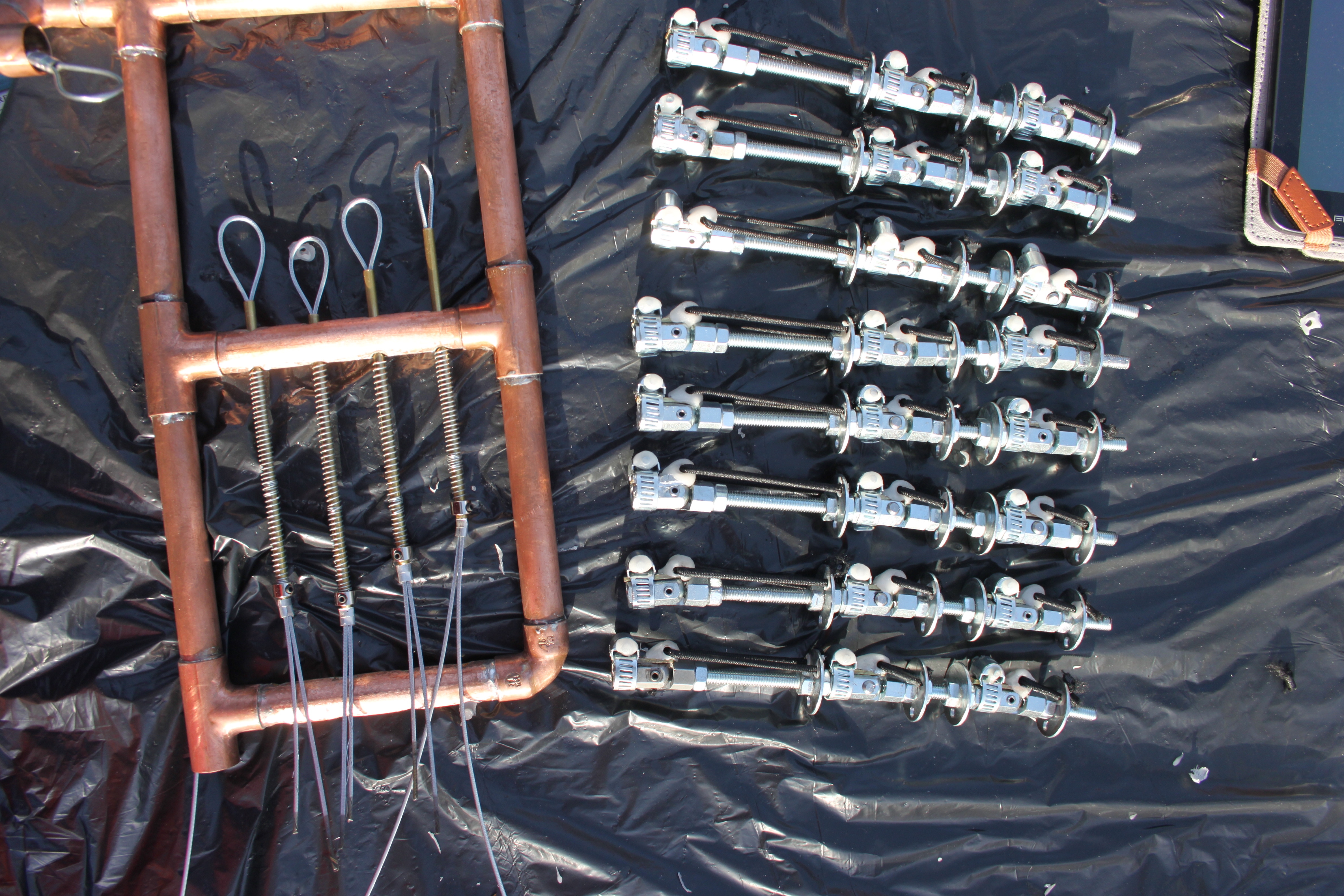 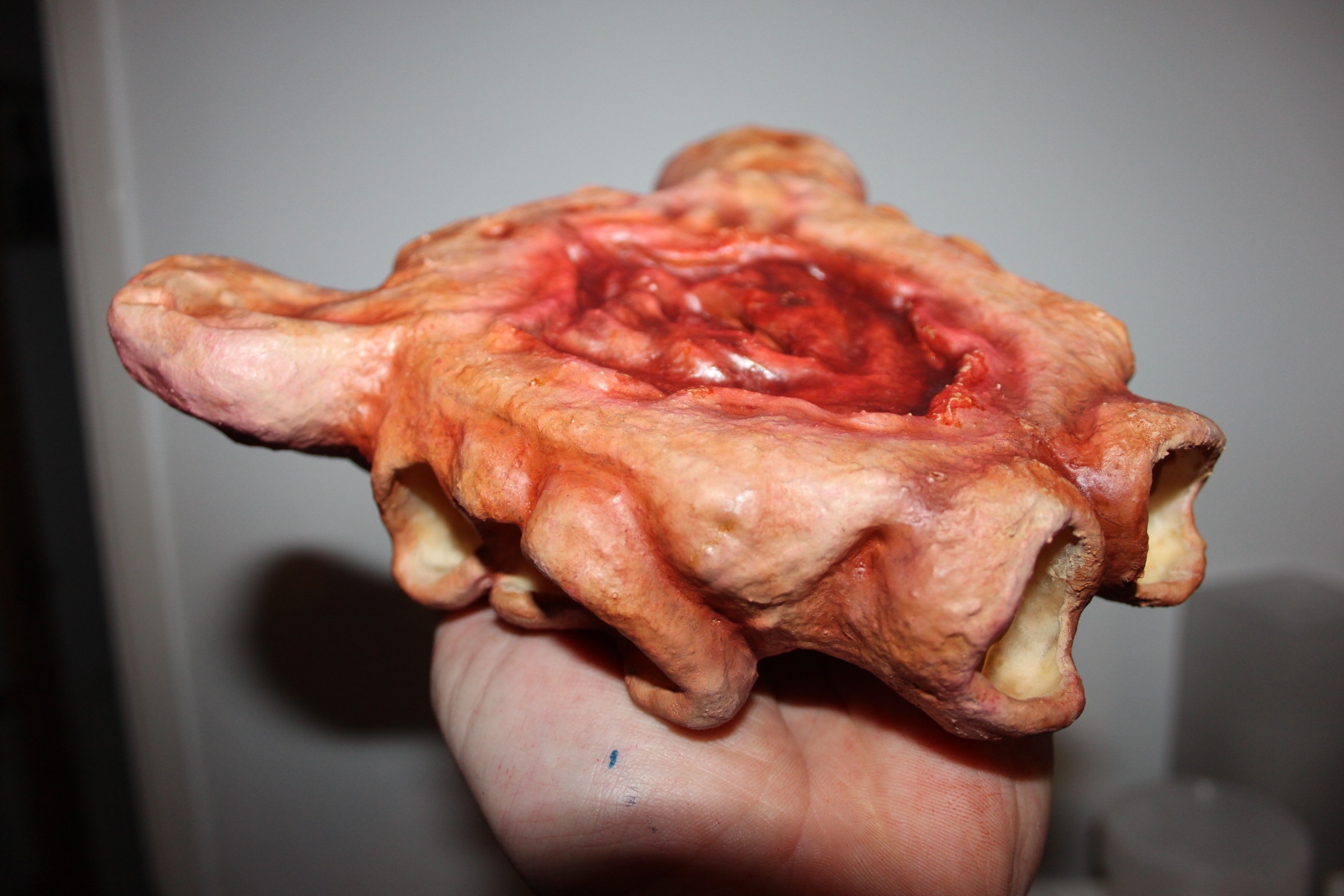 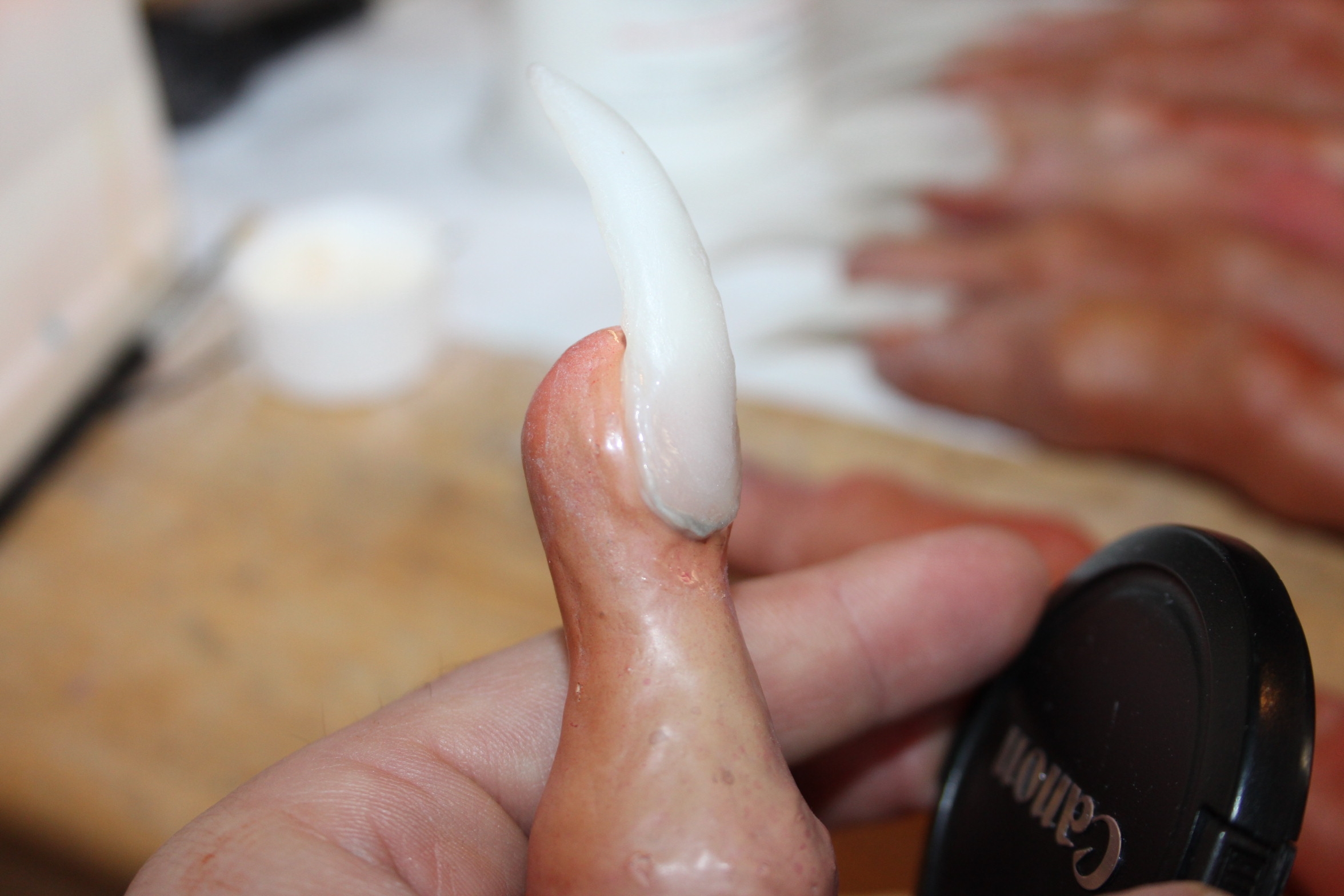 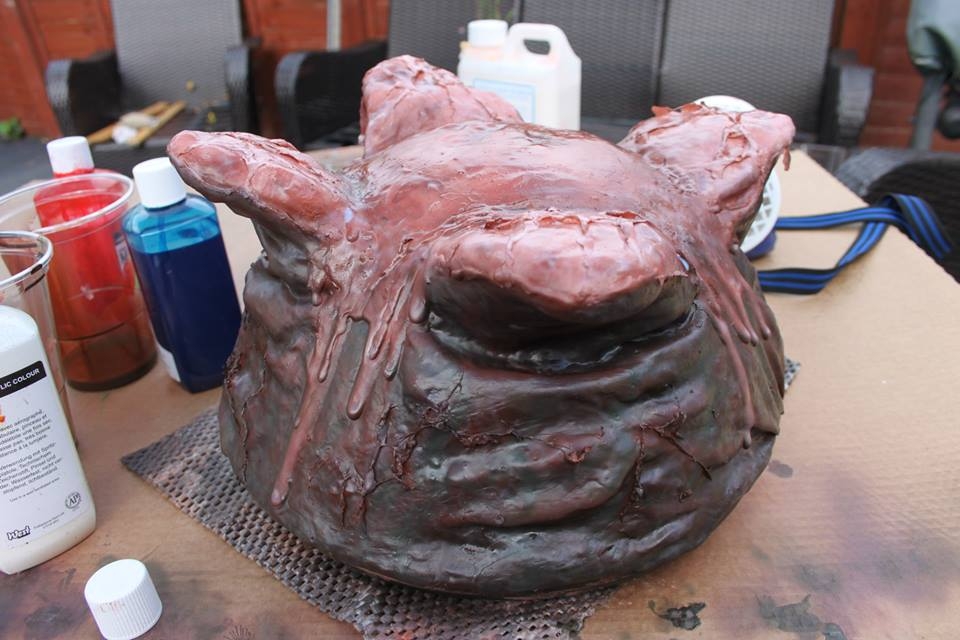 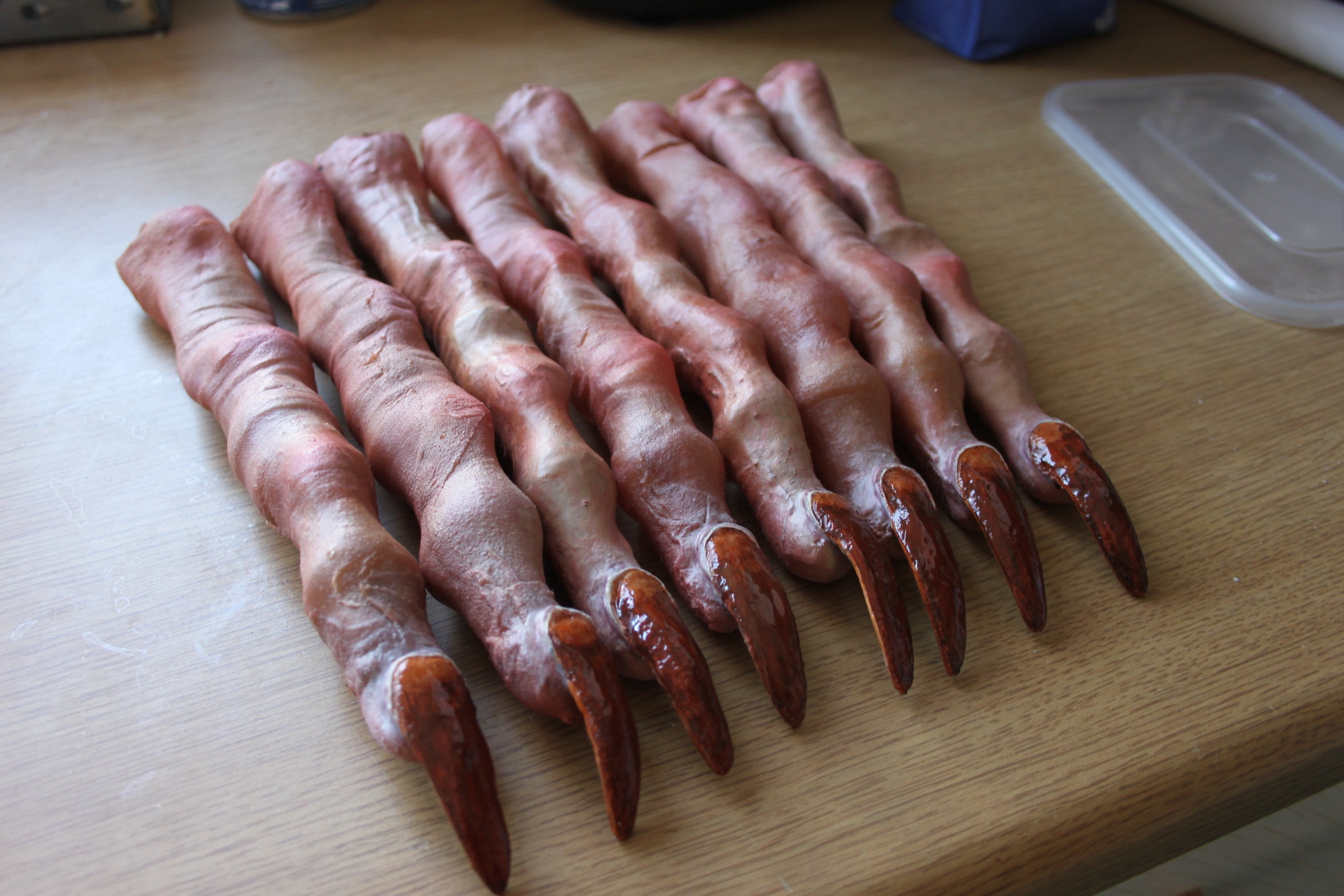 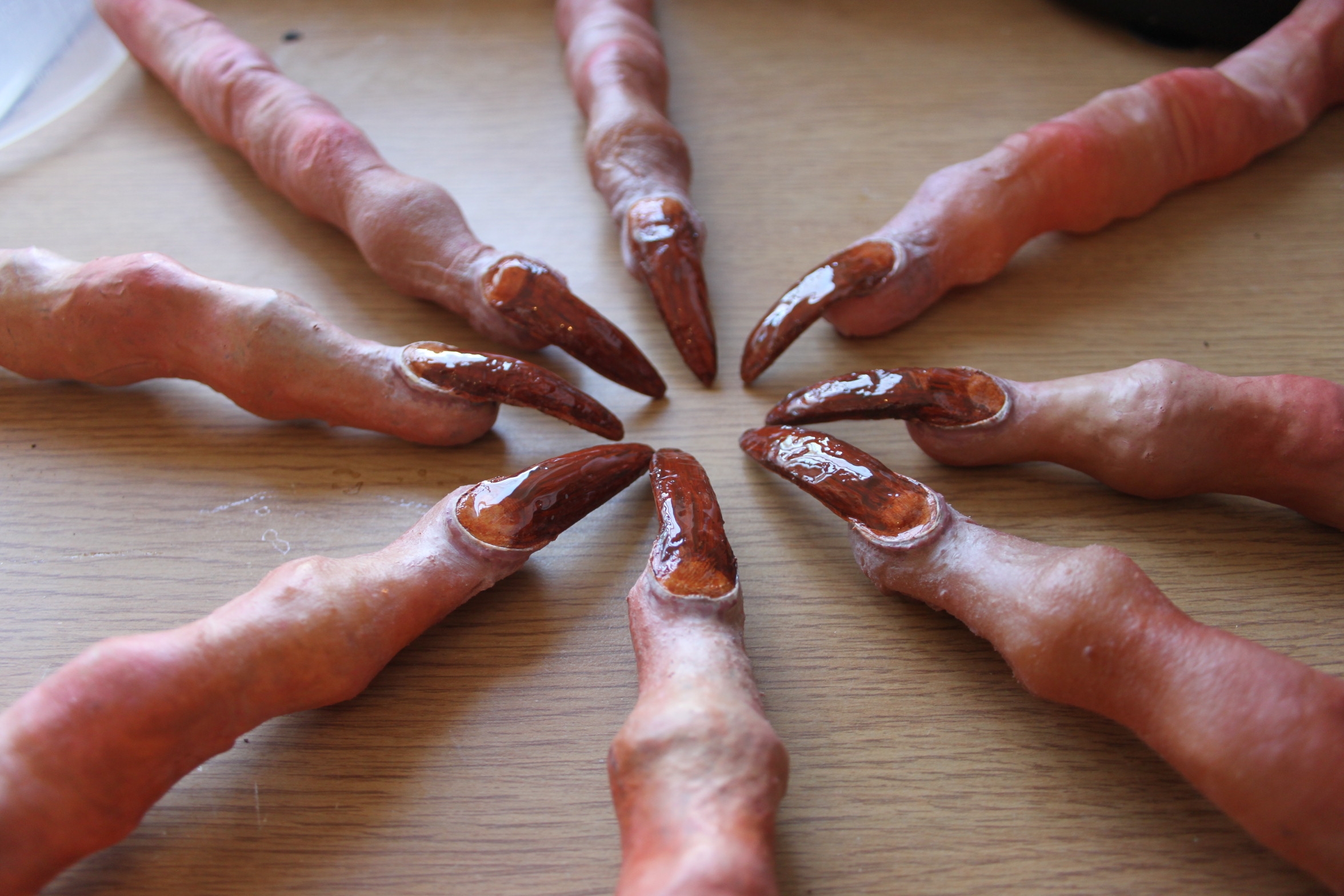 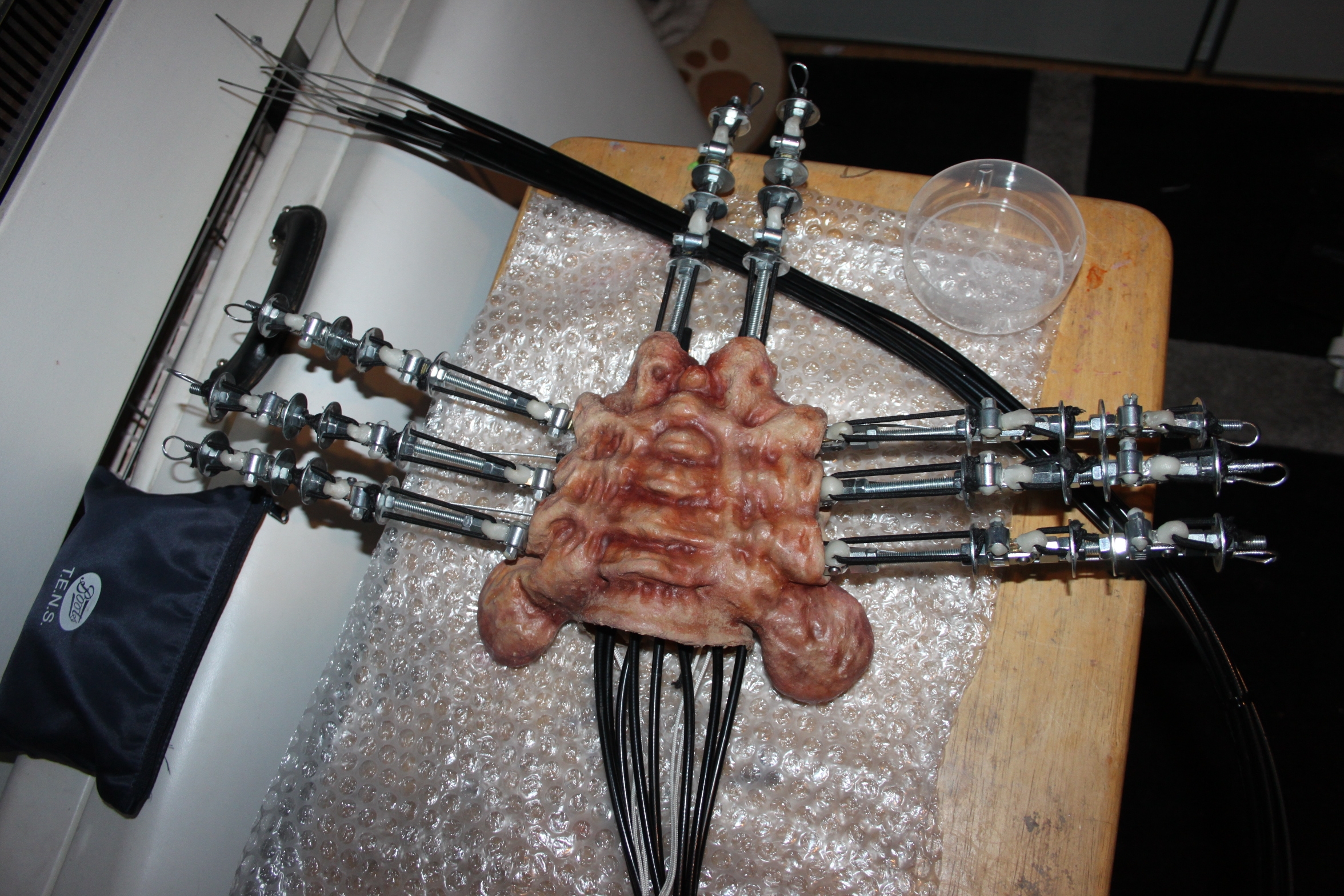