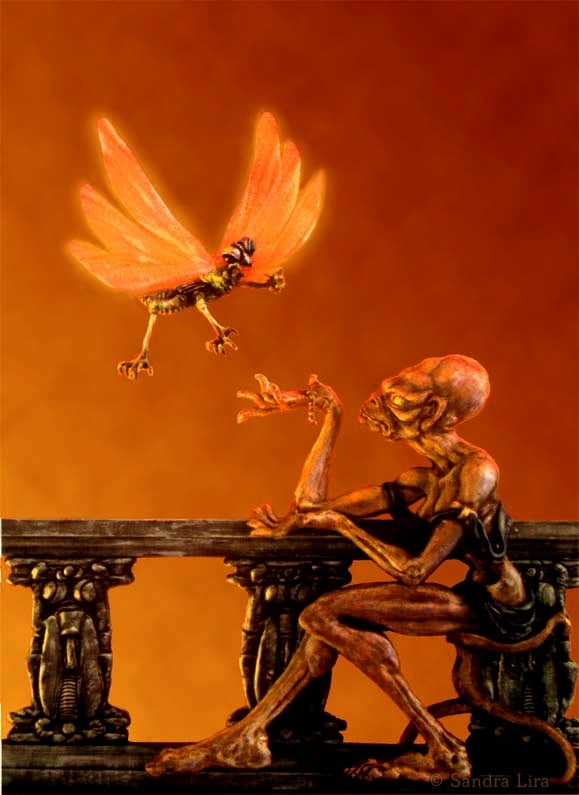 The Ceremonial Reenactment of the Legend of the Arathox and the Queen
(Original art for a stop-motion animation)
The legend states that with the building of the Innovators' fabulous city-state, the pristine wilderness was ravaged.  All the tall Sentinels of the forest were utilized, consumed. The wildlife vanished with them as well.  The city was dying, starving in the desert of its own making.
One blistering dawn, the Queen sat on her terrace overlooking the city, contemplating where the Architect's appetite for progress and grandeur had brought them.  She was awakened from her brooding by the hum of huge, transparent wings.
The lone Arathox which visited the Queen on this auspicious morning carried the gift of a seed pod which it had borne from a distant land. The Queen accepted its gift, and the Hive tirelessly carried seeds to the city-state for generations.  Their gift fed the starving populace while the seeds slowly germinated, then flourished in the desert, creating the peaceful and prosperous time known as the Golden Epoch.
In return, the Hive was made welcome in the tallest tower of the citadel and was protected, cherished and worshipped thereafter as the trinity of The Egg, The Larva, and The Arathox.
Arathox&Queen - Lira.jpg 242.4K
3
Sign In or Register to comment.