So I did a bit of work going into this to figure out what I wanted the monster to look like and collect reference images. I'll break it down into parts.

The original monster I built during the Kaiju class (Matriarch) was a two person monstrosity based on the Gorilla Wolf Mother****ers from Attack The Block.  I chose this not remotely subtle inspiration for a few reasons:

1.) I was making it for a local LARP and nobody was going to mind the obvious influence / complete rip off, since most of our monster stuff was lovecraftian anyway. Those who had seen Attack the Block were enthusiastic, those who hadn't wouldn't know the difference.
2.) The design goals were similar - I wanted to use the fur to avoid having to make complex latex skin textures, but it had to still be scary (which the glowing teeth achieve very nicely), and cheap to produce a bunch of them and have them still look good.

So I already had a few reference images, both stationary and with movement for this type of creature: 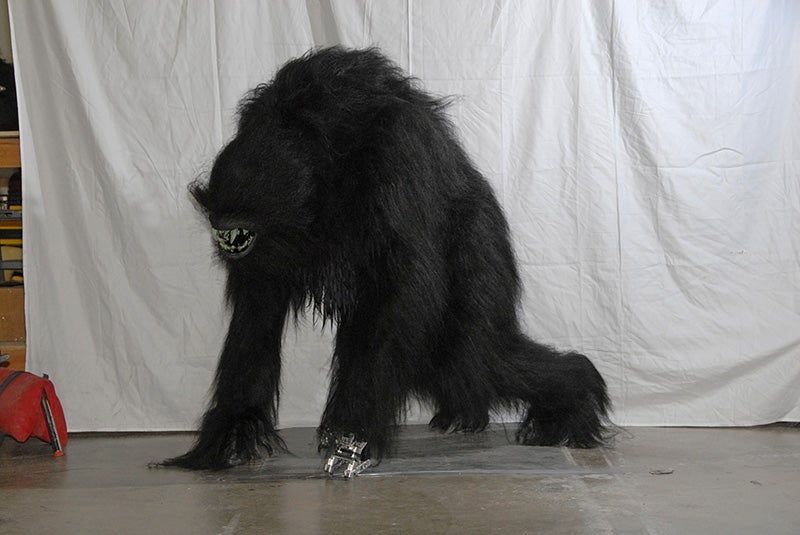 The actual monster we created for "Glimmerjaw Queen 1: Matriarch" was a lot of fun and a big hit, but a nightmare to use. 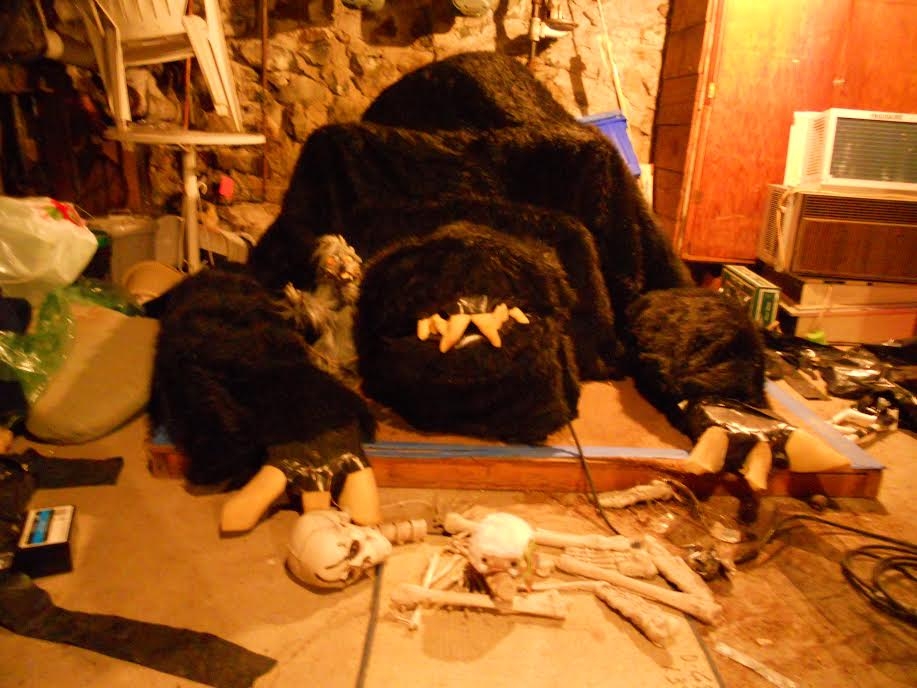 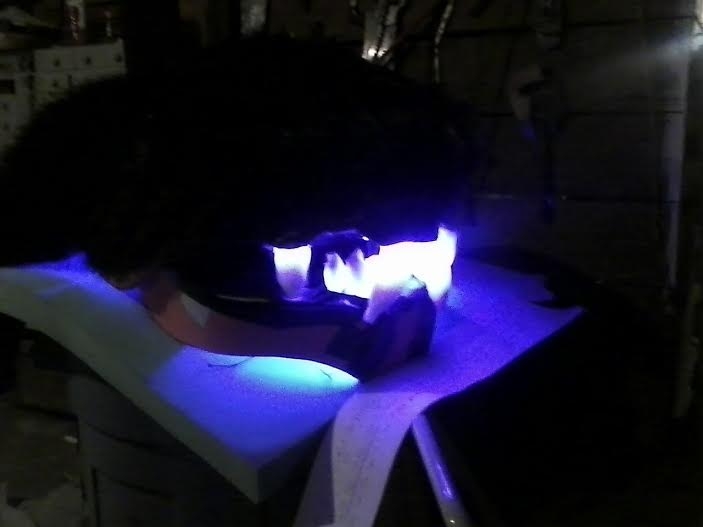 Cons:
Heavy
Very difficult to break down and set up
Required 2-4 people to operate
Really tough for the guy in back to control the arms, impossible to hit players
PVC frame bent easily
Glued joints in frame broke off, had to be screwed in

As a result, the monster died in-game due to the design flaws of the costume. It couldn't move fast enough to survive in large groups of people. Also I tripped over a low wall and some vital parts shattered. Time for a new costume!

Before Matriarch died, we created smaller drones to fight alongside the queen of the nest, based on the one person version of the suit but with much lower production quality.  I mean look at these guys, it was a bit of a mess. This clearly needs work (though these were test shots, they looked better when we got the armor plates attached properly): 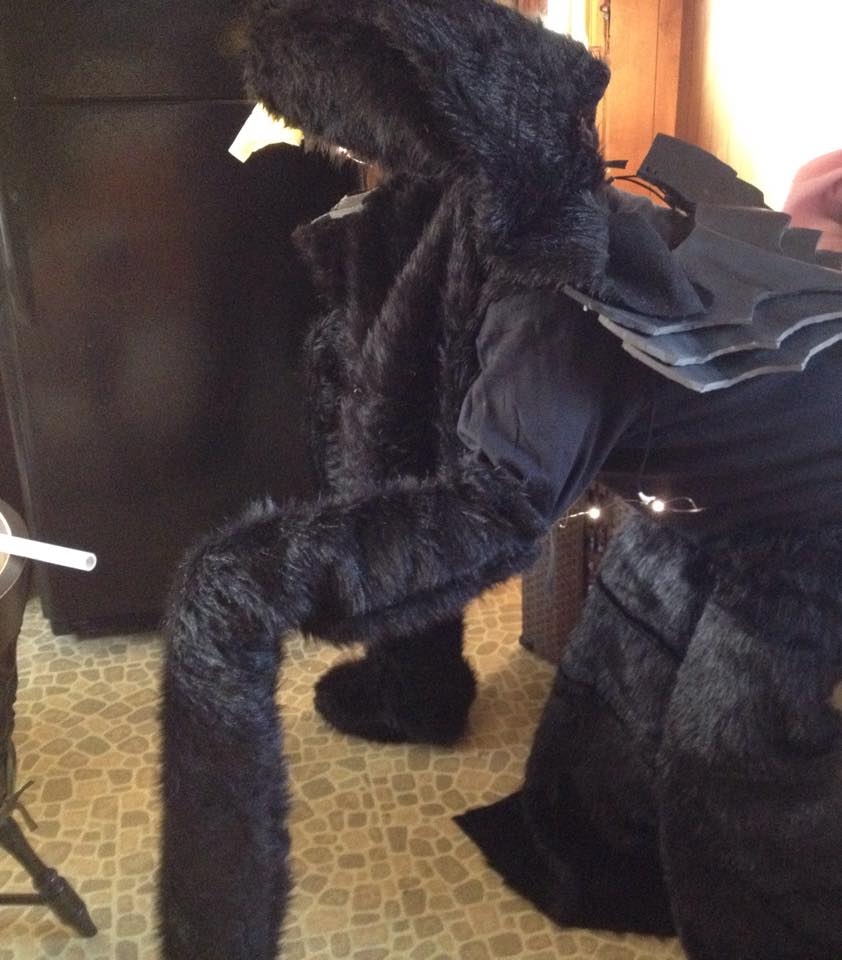 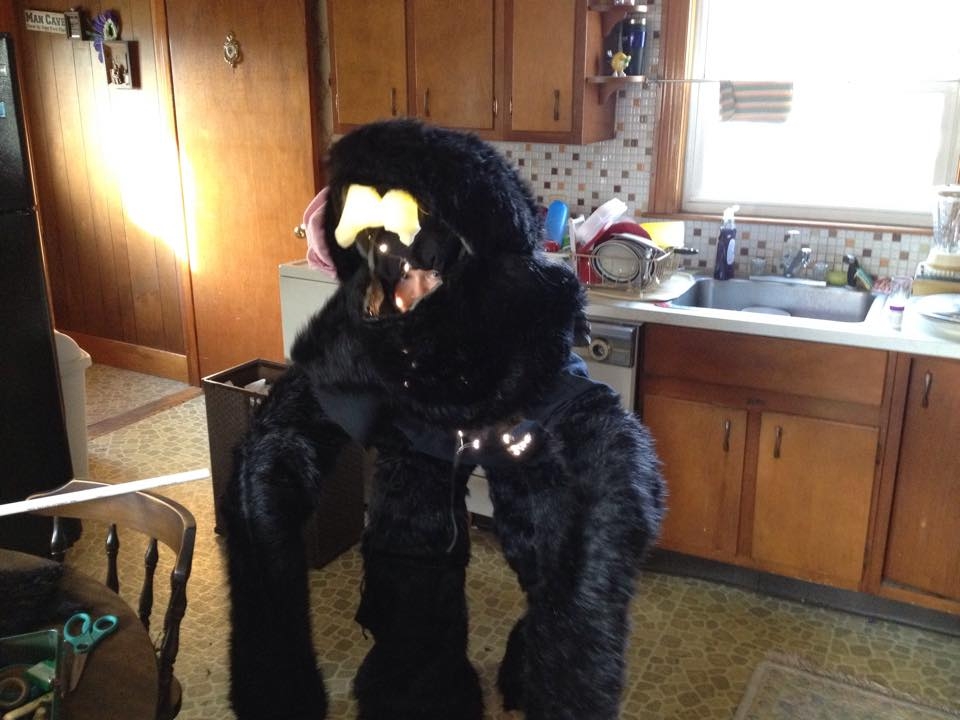 These costumes were smaller and faster than the big one, and were totally super useful in building encounters. But they had problems too.

Look like hell in daylight
Terrible visibility - the lights blind the actors. Fixed with tape on the back of the teeth.
The monster's head doesn't stay on the actor's head - I should have watched the part of the kaiju course where they attach things to helmets. Oops!
Because we didn't make the whole suit out of fur, the leggings and arm covers tend to slide down. Really not ok.
Shorter than players = less threatening

Because of the frustrations with wearing the suit, we had a lot of problems that contributed to Matriarch's death in the game.

One of these smaller characters was actually a "male" named Oscar. He started out looking the same as the drones and as he grew to adulthood we have been improving his costume, adding bigger arms, more teeth, fiber optic whiskers, etc.

The purpose of my project with this course is to build the final costume for Oscar. Ideally design changes for Oscar's costume will help teach us how to make the drones look better - but more importantly we want to use them to help build a better queen costume.

Our design goals for Oscar:

1 person suit
Slightly improved height
Big hands + arms
Articulated Fingers
Tail (fine if it doesn't move at all)
Holds up well in daylight (complete fur coverage, better teeth)
Muscley, but we don't want to use muscles to add too much bulk or height because the next one-person queen (Huntress) needs to be bigger and more intimidating than he is.

I started off trying to figure out what the monster's skeleton ought to look like. I combined parts of a chimp and a sabertooth tiger to create a mock up skeleton (the added photoshop / instagram filters were so we could print it out and use it in-game as an old timey photograph). 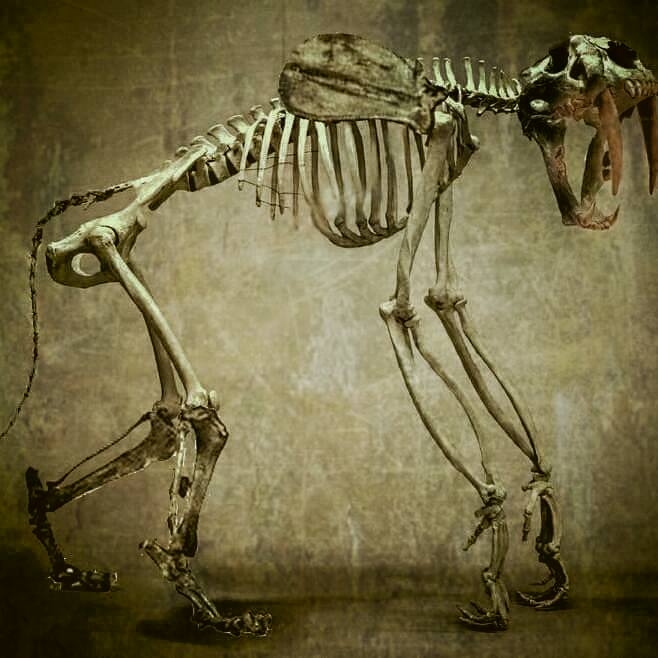 This was a composite built from pictures of animal skeletons I found online. I chopped them up, manipulated them into the places I needed them, re-colored them and then added the filters.

Next, I started taking one of the basic drawing courses on Stan Winston to learn how to sketch monsters. I had to look around to find a monster that most closely mirrored the musculature that we wanted to achieve with Oscar. Note that his arms don't bend the same way as the Drones. We found something that looked like a good fit in Hellboy's Sammael, the Hound of Resurrection (interestingly both this and the gorilla wolf mother****ers were made by Spectral Motion, a complete coincidence): So I attempted to sketch a version of Oscar based on some of the reference images: 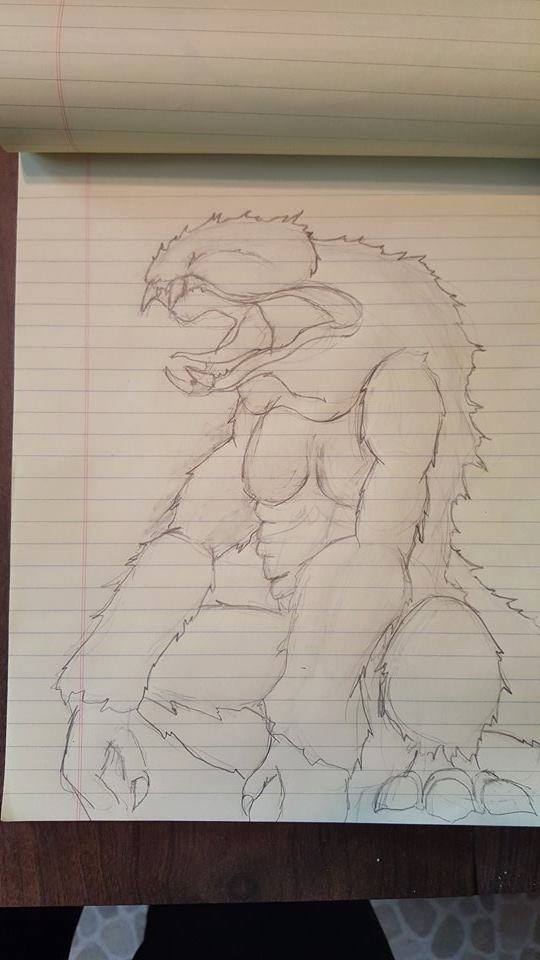 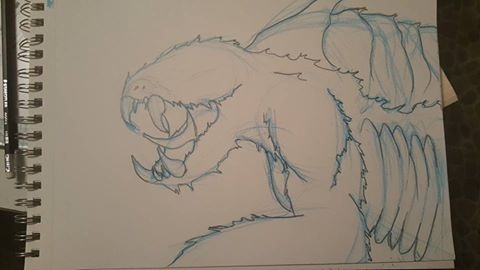 My next step with this is going to be to get some human references and do what Twd did in class - drawing the muscles and suit form around the image of a human actor.

In the meantime I have begun construction of the Mannequin, once again using a Stan Winston webcourse! I use a lot of those. Here is the upper torso of the mold: 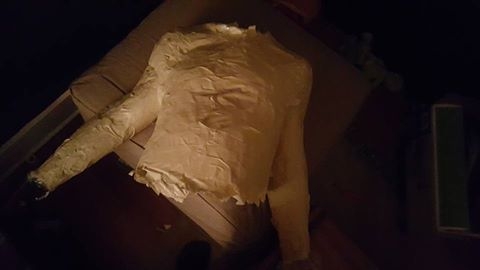 And here is a video  of early tests for locomotion (pre-muscle suit). You can see I've built some digitigrade stilts (very simple version, I've heard it called "truncated" by one of my cosplay friends). We're using Oscar's old arms in this video, which will need to be rebuilt.