Jacob Dominguez ✭
June 2015 in Dino Art Contest
After making my baby velociraptor puppet (my first entry in this contest) and a handful of other creatures over the past three years, I decided I wanted to do another dinosaur, something bigger. After planning a lot of other potential projects, I had the perfect idea. It was time for my baby raptor to grow up.

This raptor was made in a very similar way to the baby. She was built almost entirely of upholstery foam (huge thanks to the SWSCA for the article on Courtney and Scotty Zod's raptor suits, very useful stuff). I started by making a 1:1 scale template of the head on a piece of poster board.
I then traced the template onto two pieces of 1/2'' upholstery foam to get the two halves of the head. To fill out the shape of the head,  I cut two more pieces, essentially just a triangle to connect the halves of the bottom jaw and a long, thin diamond-like shape that went from the nose across the top of the head and down the back of the neck, if that makes any sense. 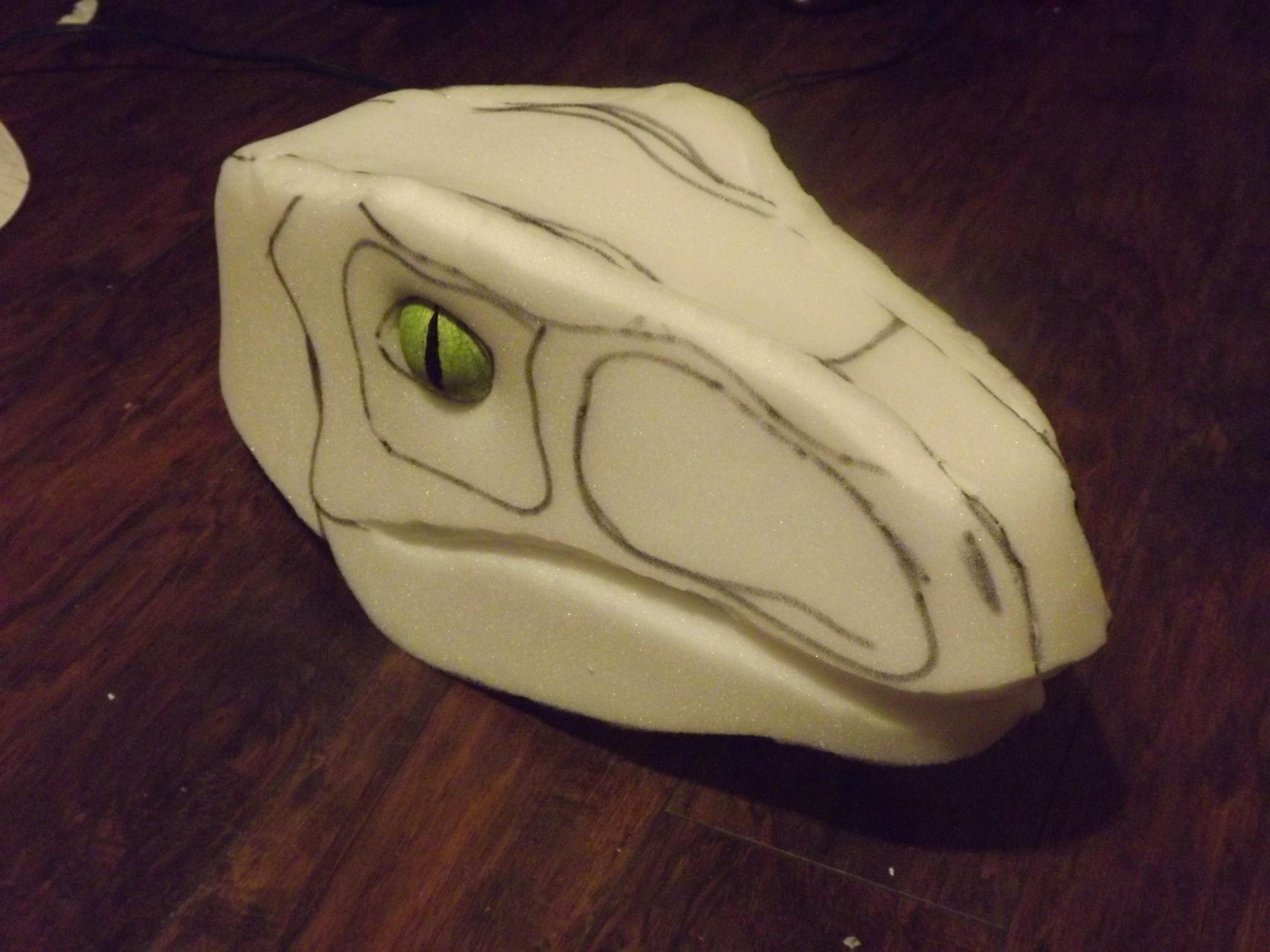 Once the overall shape was in place I drew out the skull structure in sharpie. I cut out the outlined areas around the eyes and nose and inset them about 1/4'' to help create the structure of the head. The back end of the skull near the ears was done the same way.
The eyes are made of 2.5'' Styrofoam balls that I painted green. I added pupils with sharpie and veins/color streaks with a green washable marker. the Styrofoam beads added a nice texture as well. I sealed the eyes with a gloss clear coat.
The head was rounded and smoothed by trimming the edges of the foam with scissors and I used a heated foam cutting tool to press some reptile skin texture into the head/neck. After the texture work was done I plasti-dipped the foam to seal it.

I built the body using three pieces of foam, two sides and a bottom. The arms were cut out of double layers of foam to give them the right thickness and then glued to the body. The hands are cut out of the same foam and the fingers were bent and glued in place. The scales on the fingers are layered pieces of EVA craft foam sheets and the teeth are made of the same foam. The claws are pink insulation foam sanded to shape and painted black.
The neck is basically a huge tentacle mechanism (thank you Richard Landon) made of tubing from a pool vacuum and insulation foam discs with bike brake lines running through them. To give the neck the right flexibility and texture I covered it in a cheap black fabric instead of foam.

After putting everything together I spray painted the whole thing with a terracotta colored base coat and built a PVC frame to hold the weight of the head and support the body. I only built half a raptor because the idea is to stick the head out of some bushes. Like this. 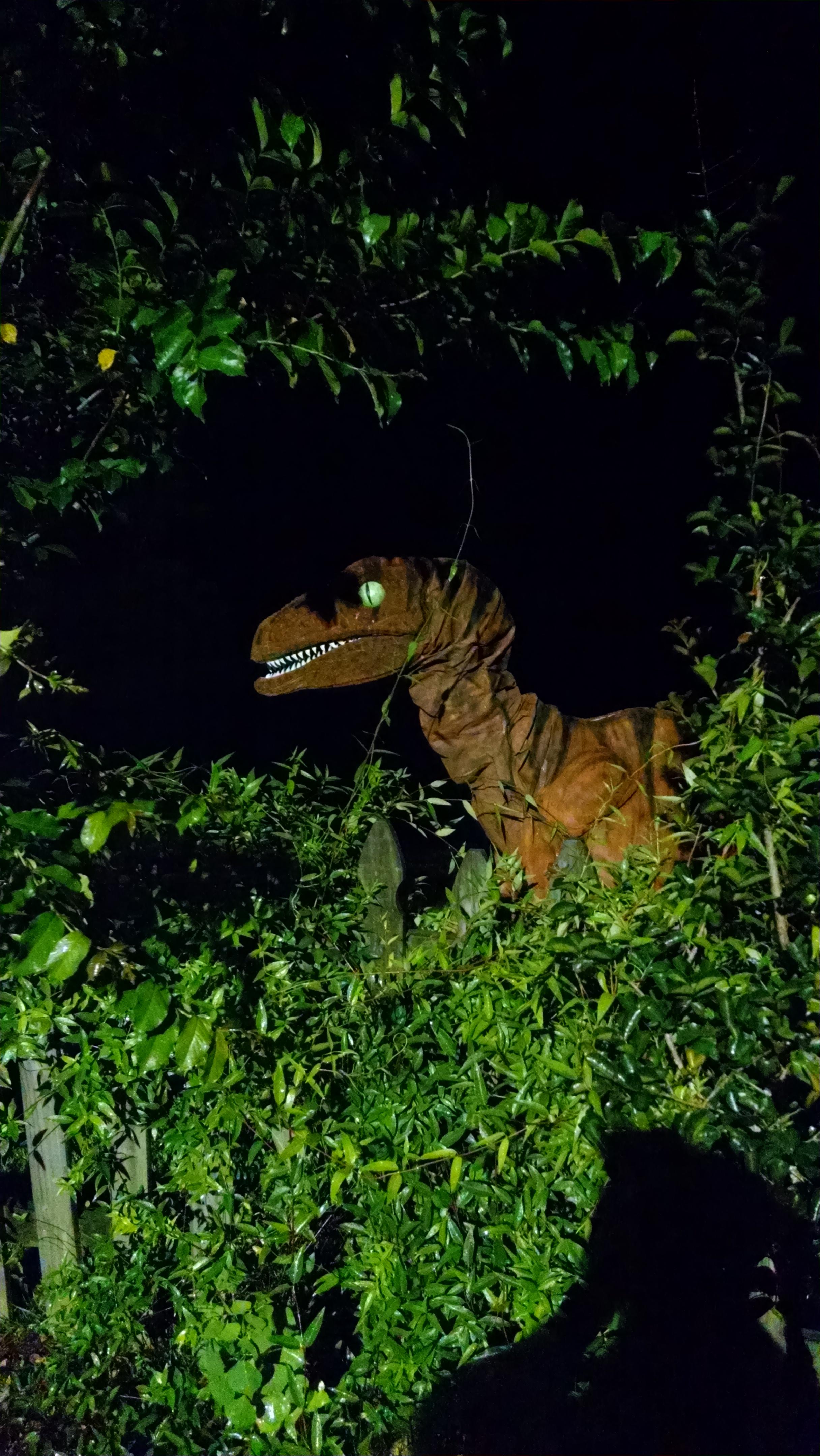 To finish the paint work, I airbrushed all of the shadows, markings, and other textures over the terracotta color with black and a few shades of brown and red. The inside of the raptor has cables set up so I can add some servos to open and close the mouth as well as moving the head up and down. 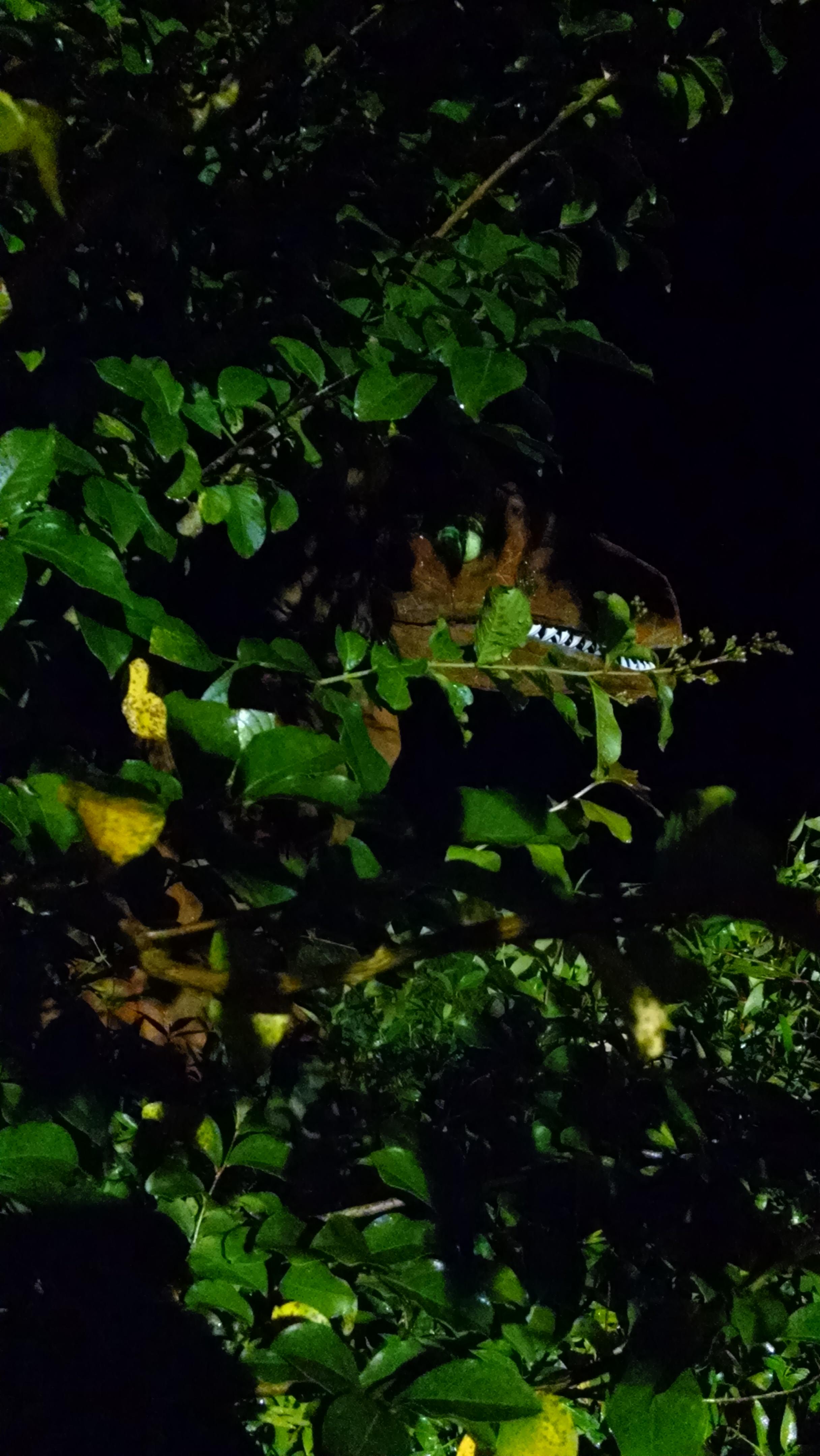 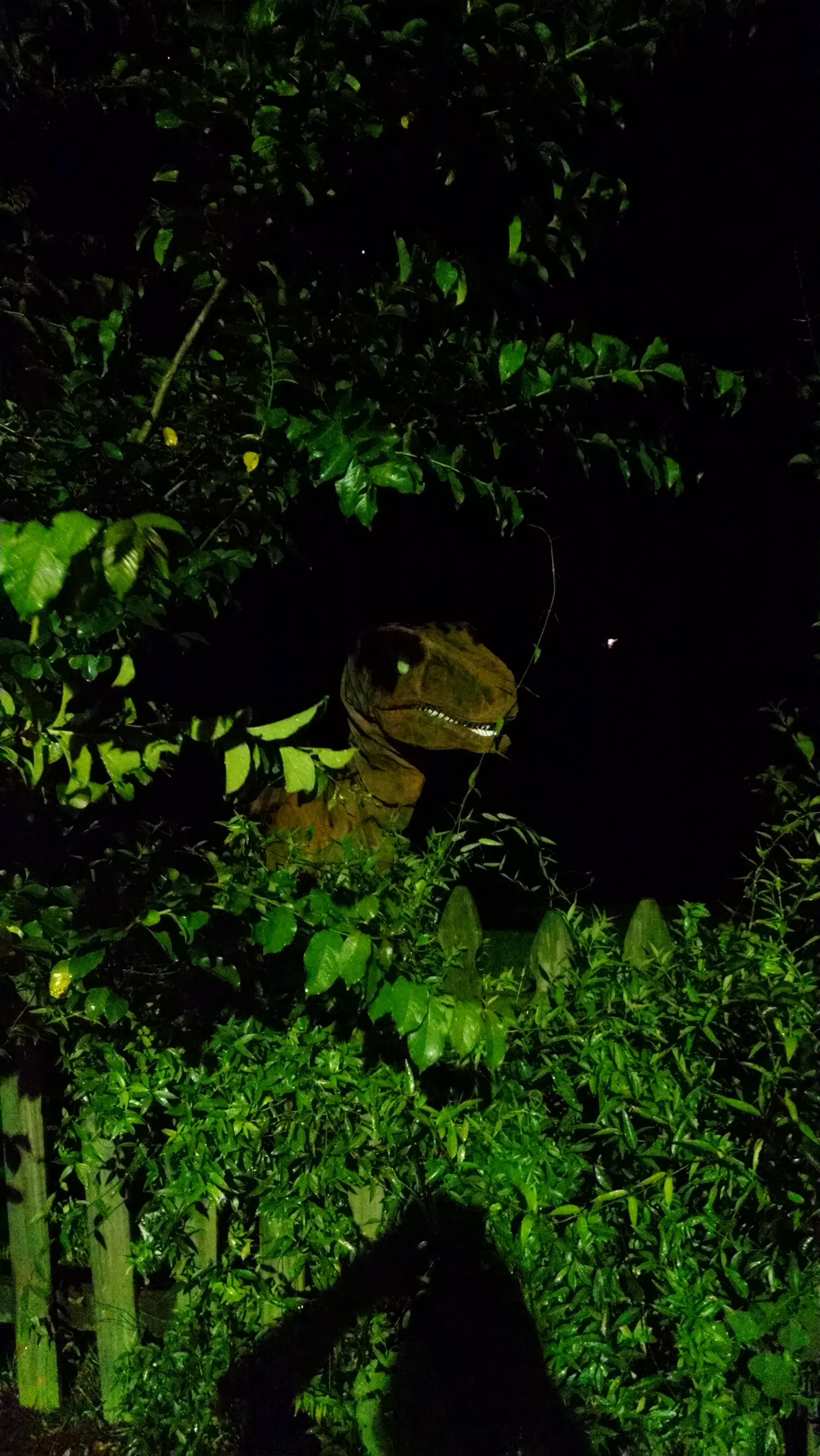 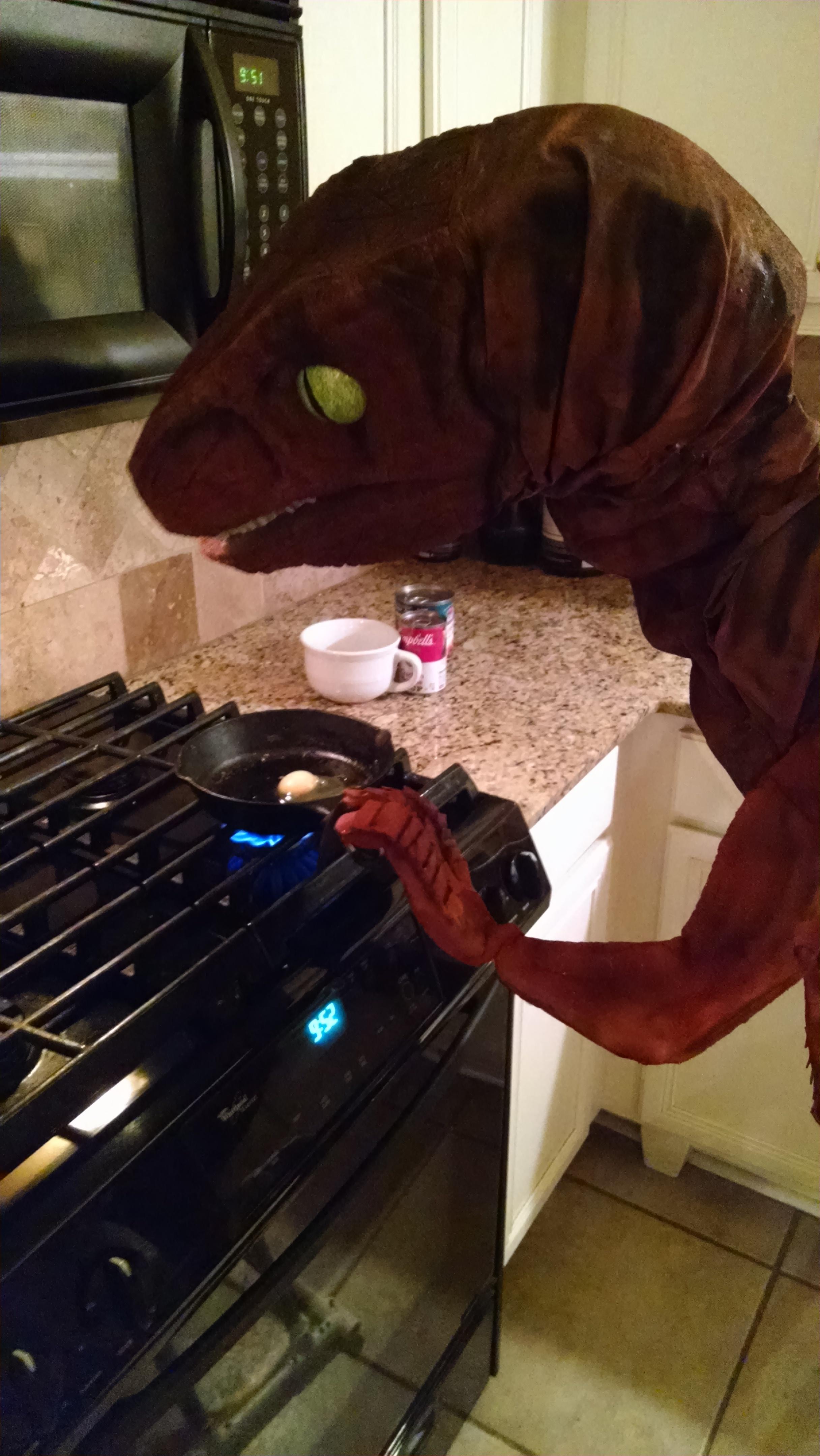