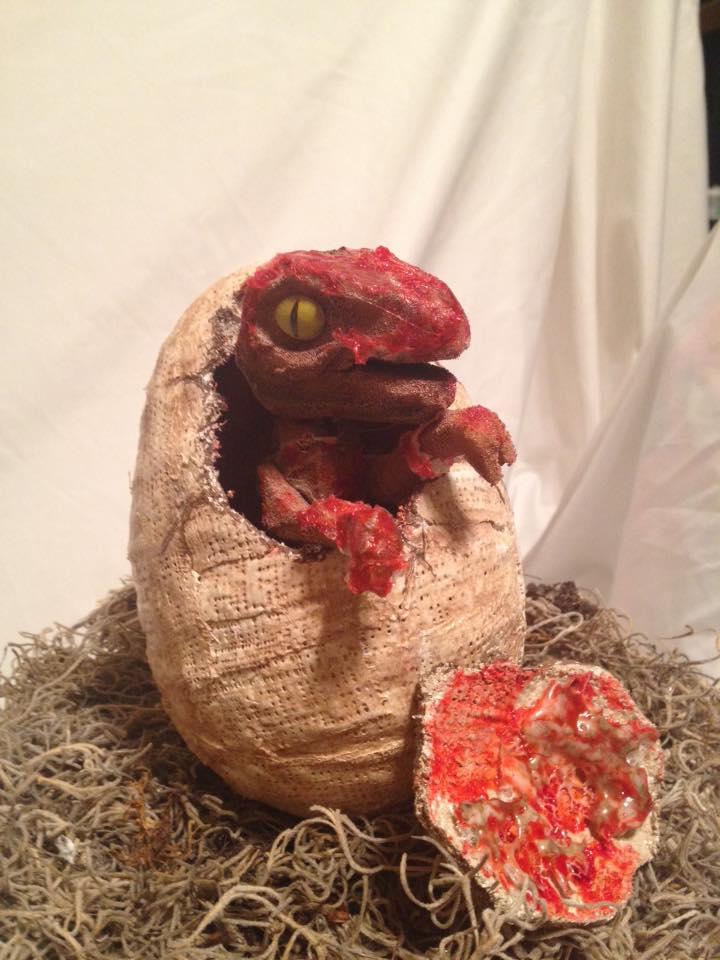 This is a project I did for art class in my freshman year of high school, obviously inspired by the baby raptor from the first Jurassic Park film, which was the reason I decided I wanted to start building creatures. I just graduated last month and after three years of use it needed some repairs. 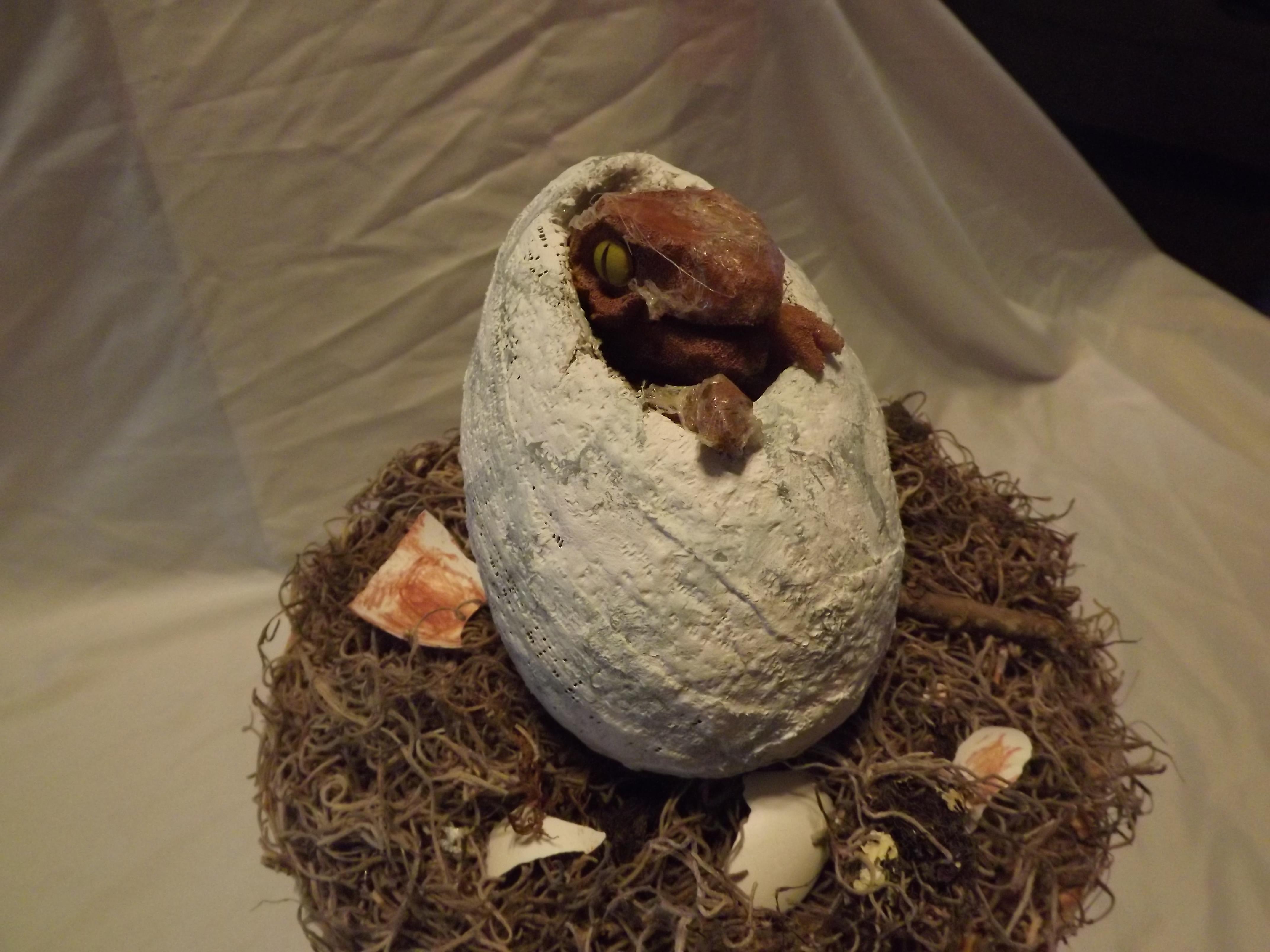 The raptor itself is a rod/string puppet made of 1/2'' upholstery foam. She was built in two halves, left and right, with a wire  coat hanger rod running down the spine. The rod is attached to the head and the body is a separate piece that works like a sleeve over the rod. This allows left/right head turns as well as overall control of her body. There are two pieces of fishing line running from her mouth and her arm. Pulling these moves the arm and opens the mouth. My dad gave me the idea to wrap her in plastic wrap and use a blowtorch to shrink it to form a skin. This didn't work as expected, but it ended up looking like she was covered in fluids from the egg. The base she's on is is basically just a small, round plywood table I built with four legs and a hole through the top to run the rod and strings through. There is moss covering the top and a piece of white poster board covering the table legs so that she can be controlled from under the table while your hands are completely hidden. The puppet is still in good shape but her egg was starting to fall apart. A Styrofoam egg from a craft store was the base of the egg and this was then layered with plaster strips. To remove the Styrofoam and strengthen the shell, I used a blowtorch to melt the foam until all that was left was a thin layer of melted plastic inside the plaster shell. I then cut some flaps out of the plaster to give the puppet a way out of the egg. Over time, those flaps got weaker and looked more like fabric than egg shell. This is where the repairs came, and I can't take all the credit here. This was definitely a team effort. With the help of my wonderful friend Mallory McKenzie, I built a new egg for the nest and this one worked so much better. 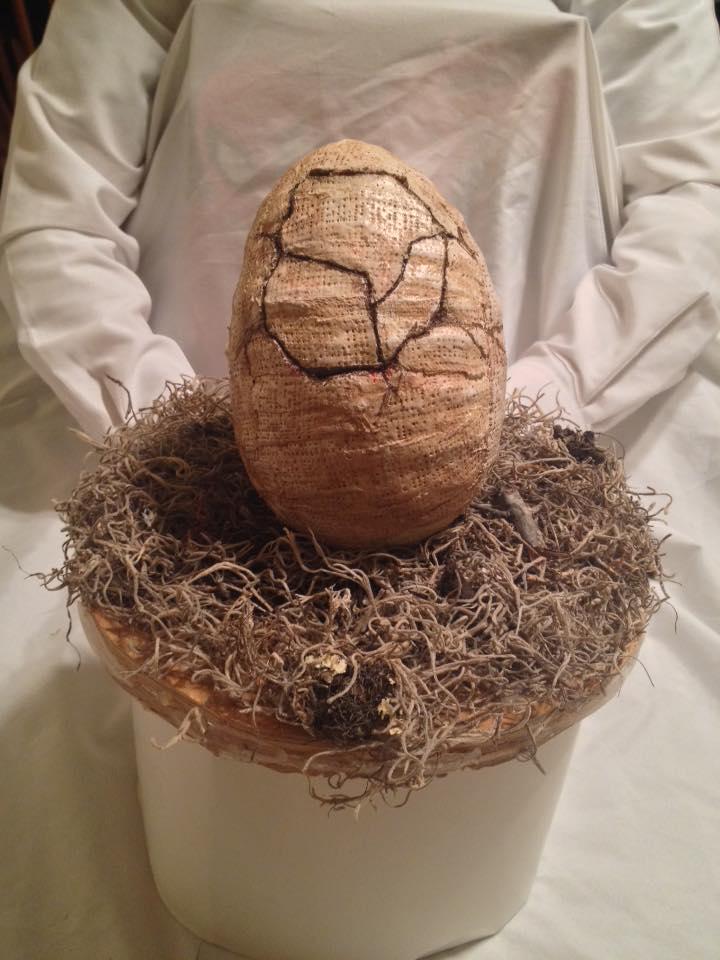 This second egg was done in the same way as the first with a few changes. There are about four or five layers of plaster instead of two, we built up a plaster support coming from the back side of the egg to add stability (the first egg was always falling over), and most importantly, no flaps. The shell of this egg was painted with a base layer of watered down tan acrylic and a wash of brown acrylic over that. I then sealed it with a gloss clear coat. 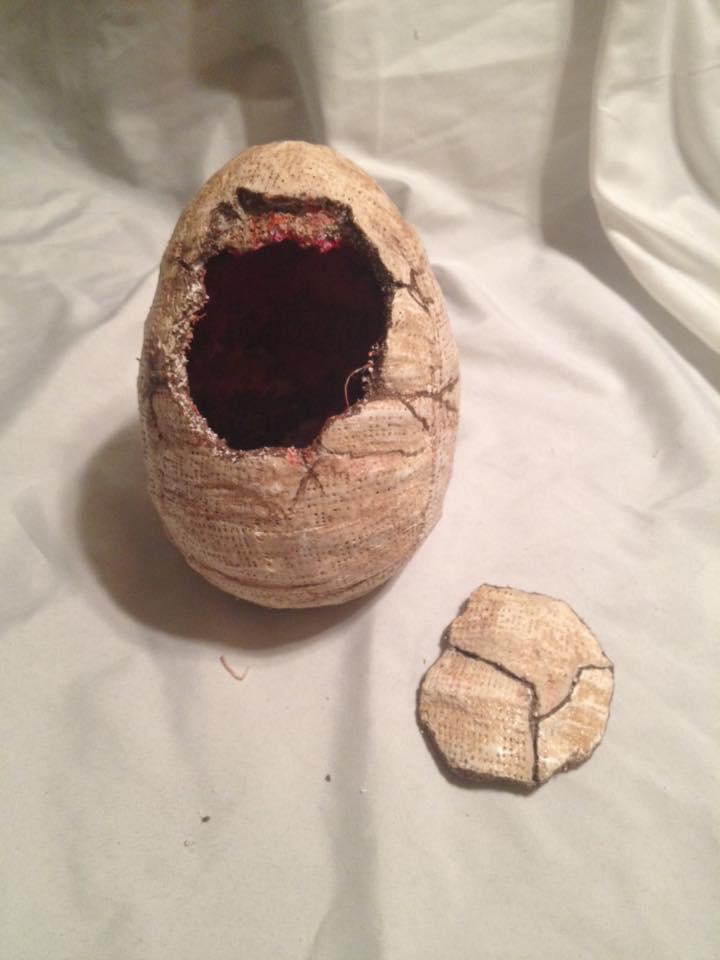 Instead of flaps in the front, we cut one large, jagged hole out of the front of the shell and added some fake cracks to it so that it looked like three pieces instead of one. We used more brown paint to spread the cracks across the surface of the shell. 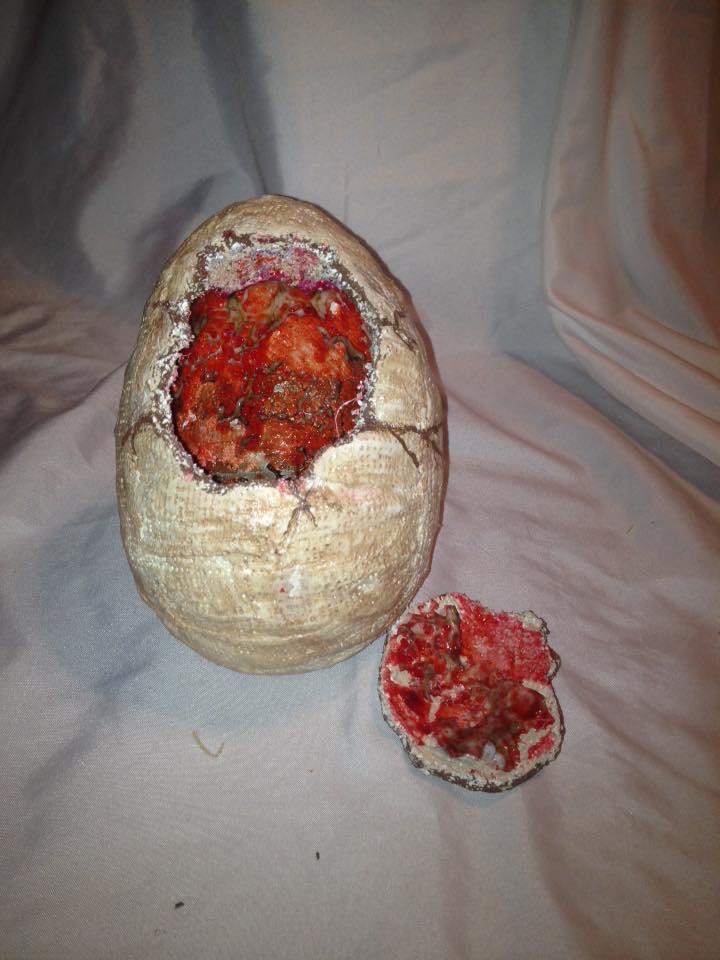 Inside the egg, the melted Styrofoam had a really nice texture and looked like a membrane, but it wasn't quite right. Mallory gave me the great idea to add some hair gel mixed with red food coloring to the inside. I think it worked great because it looks wet and shiny even after it dries. We also added some of this mixture to the raptor itself over the plastic wrap that was already there. 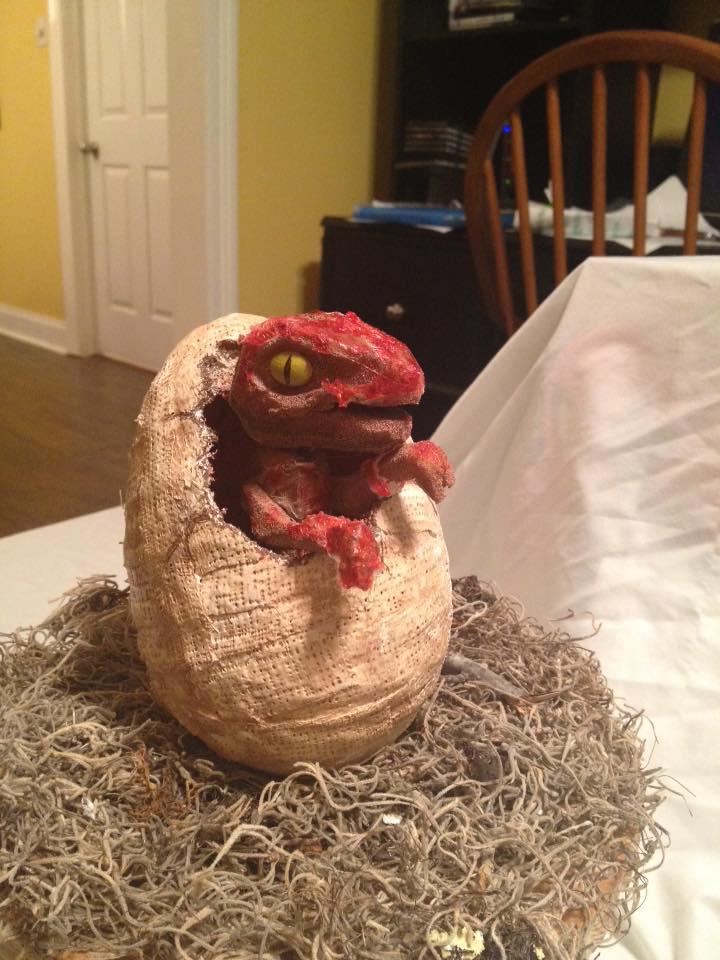 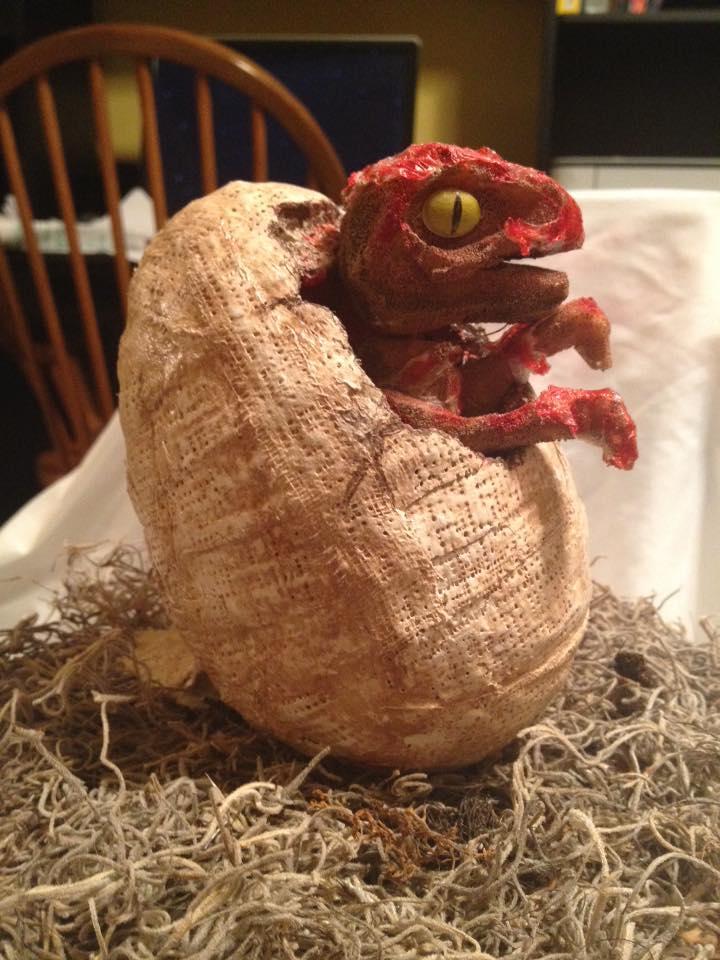 Also, the eyes are oval shaped googly eyes that I painted over. 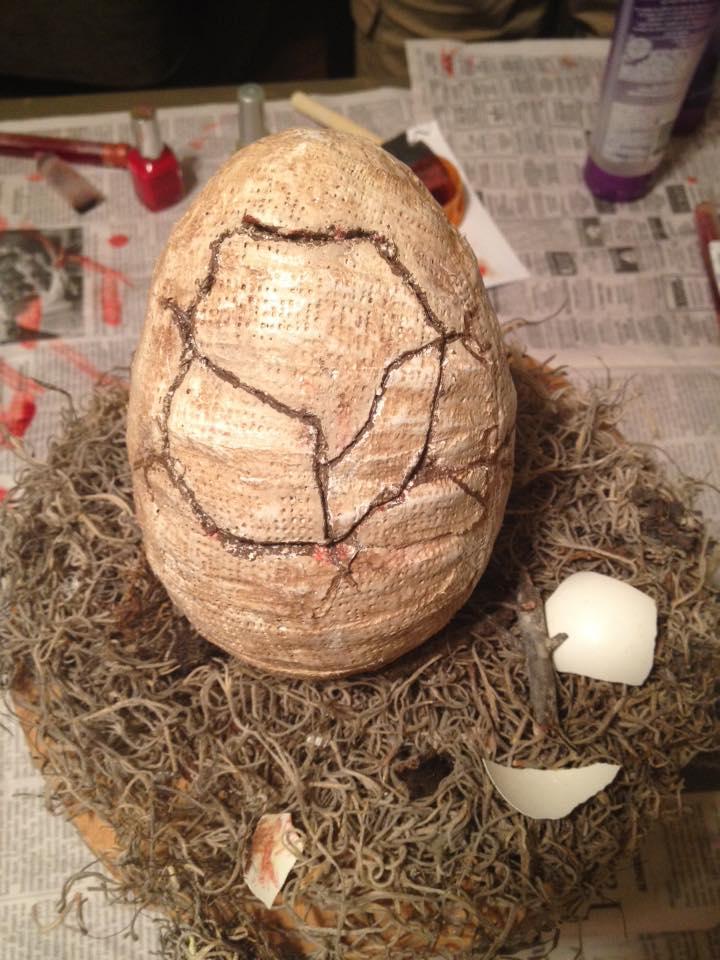 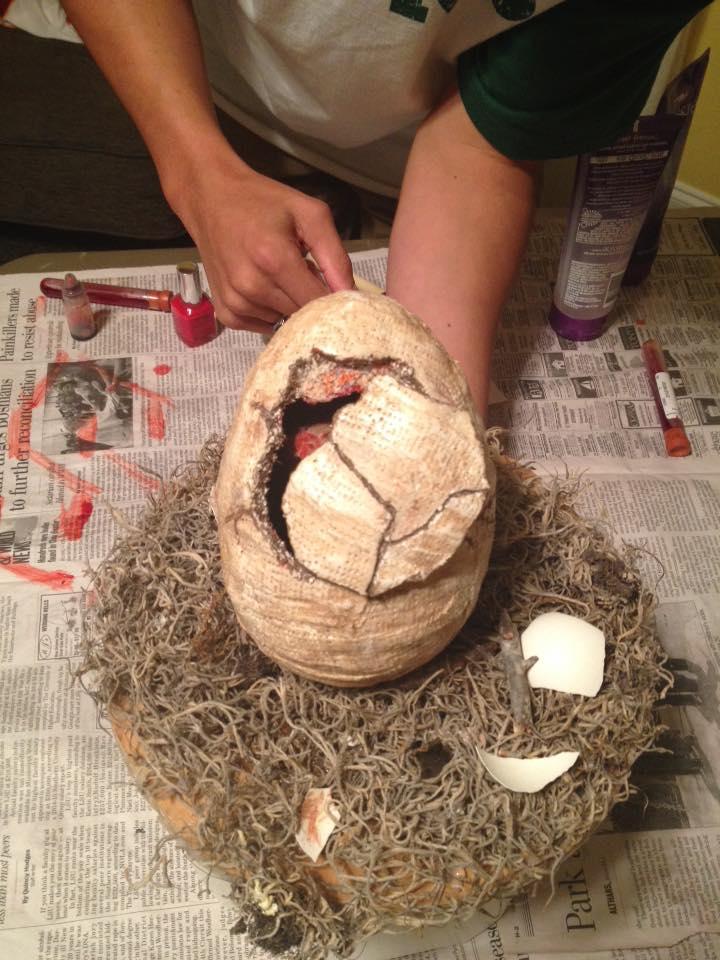 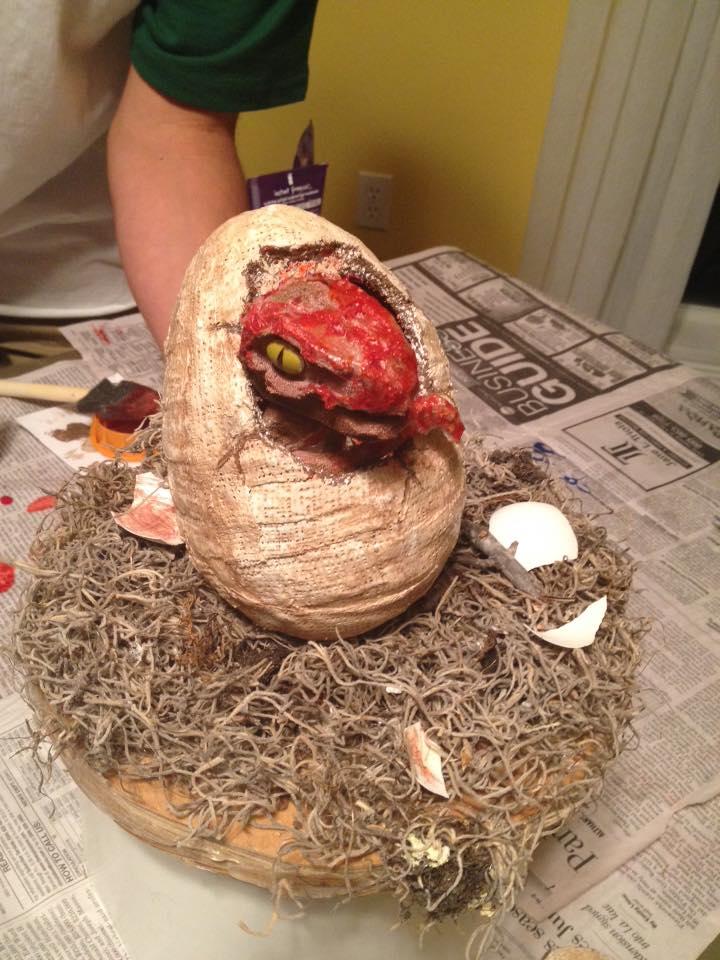 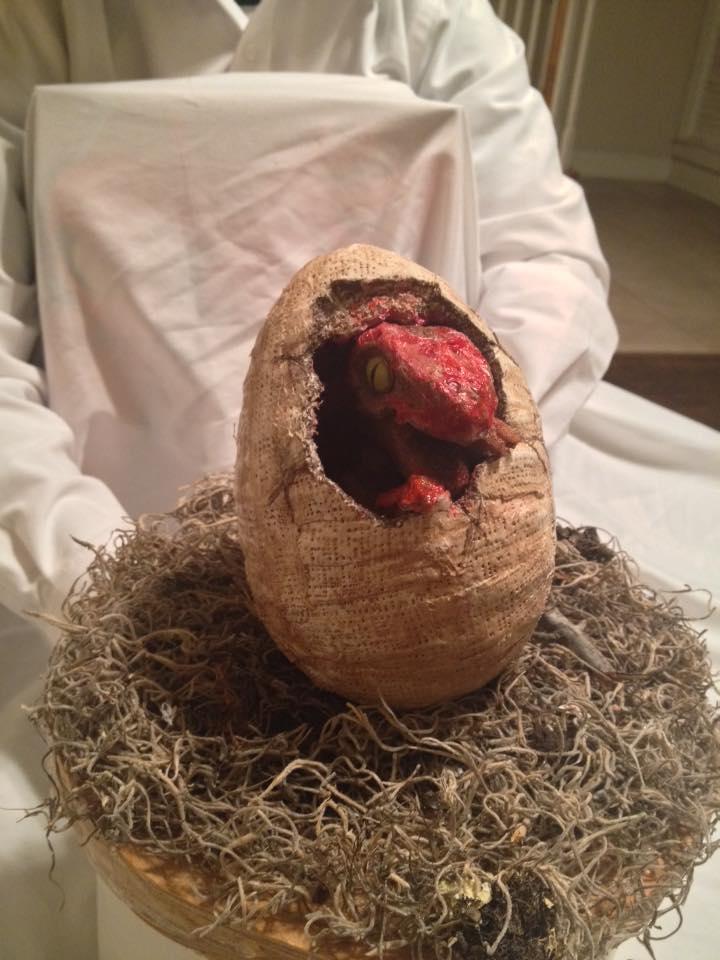 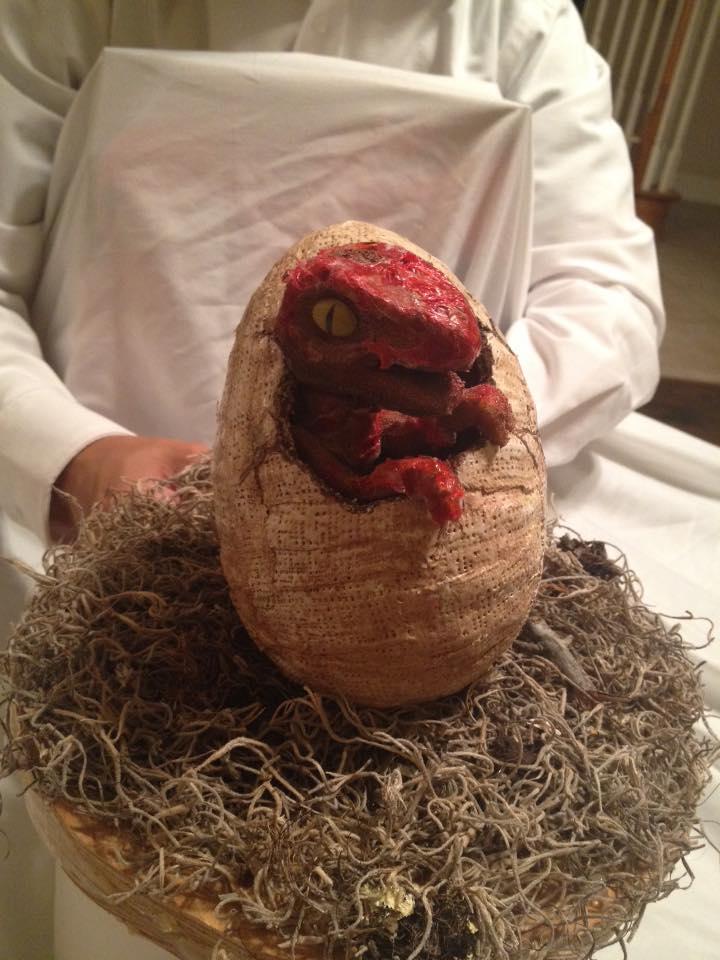 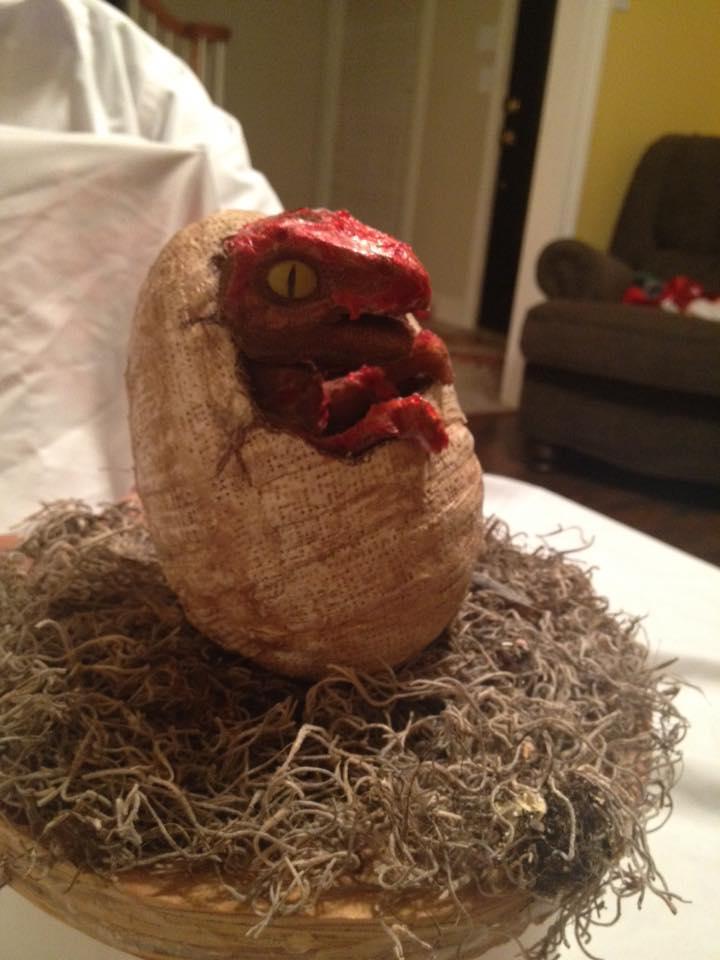 I would have loved to include a video of her hatching but there were some...technical difficulties.