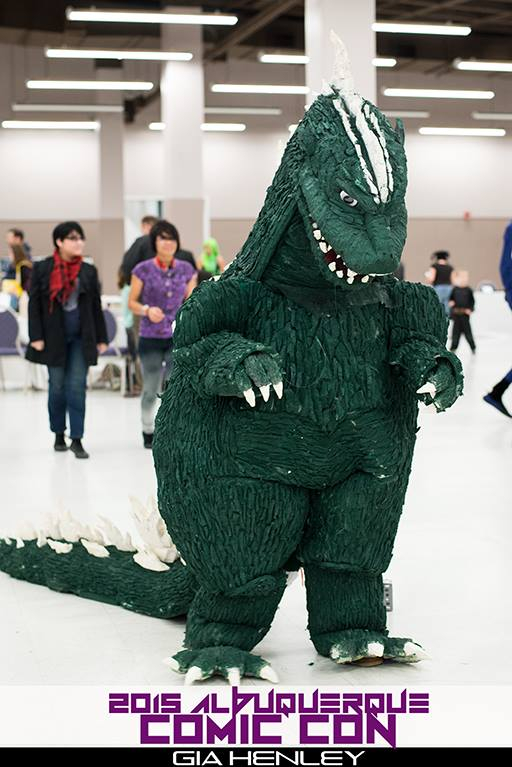 I have been a rank amateur building for about 5 years now, though I have helped the neighborhood children dress as Borg, vampires, etc. On occasion genius would strike. I did a zombie one year by gluing live meal worms to my face and managed to clear out a whole buffet line!

After watching Face Off and attending my first comic con, I got the bug real bad. Since I am not young enough nor skinny enough for super-heroines I went for the bad boys. My first build was Doc Ock. About 2 years ago I did a full body King Ghidorah build mostly out of cloth and worked with soft foam for the first time. After somebody sent me a link to Becoming Godzilla I decided to go for it. This is my first full body foam build of anything, so in my madness I tackle the Big Guy (full build)

The actual build time was about eight weeks, though plotting in my head was much longer. What took the most time was the texturing of the body, taking scraps leftover from cutting the fins and gluing them in long strips. I ended up using regular house latex paint to cover, first in grey (which he looked great in as well ) before covering in Dark Forest Green. I reused the King Ghidorah feet and added an extra toe. Originally I was going to keep the hands and feet just duct taped and spray painted, but ended up running foam texture on them too. Glad I did; it looked much better.

The head came out excellent, better than I had hoped.

Setbacks? I didn’t have much of a form for the body, so he looks a little dumpy or SD’ish in a Chibi sort of way. The neck doesn’t quite line up with the chest, and I didn’t re-measure the neck when I added the velcro to secure the neck to the body so my first outting in the costume had my cheek right up on the chicken wire in the neck. Also the mp3 player I had in the neck kinda was blasting Blue Oyster Cult’s “Godzilla” in my ear. Also I tried to get that slick look on the scales so I have like 5 layers of paint on them, making them heavy. I think the next set I will glue tissue paper over them and then paint to make them lighter. Also I should have painted the flat pieces green first as I had bits of white showing everywhere, even after five coats.

I also need to reinforce or revamp the upper body as I ended up ripping out his shoulders and arms (the upper arms were part of the main body, leaving only the lower arms free) and tearing across his chest. The 4 point velcro used to hold the tail to the costume wouldn’t hold but five steps. We ended up sewing fishing line around the butt and the tail stayed on great!  I think If I had glued fabric onto the foam and then started cutting the body would have held together better.  We still “shedded” quite a few bits and pieces of scales while dancing…

Strolling to the costume contest:

http://vid245.photobucket.com/albums/gg69/Cptdragon9/abqcomiccon2015/godzilla%20dance_zps9qgehspi.mp4
>One big setback was that I didn’t think I needed a fan as the whole front of the neck was open.  Ended up passing out while waiting for the judging.  We used a simple battery operated fan mounted in the throat pointing down and it kept me cool enough.. Still needed to strip off the head and opened up the back about every hour and a half so I could cool down.

I also think I have developed and addiction to hot glue. I can’t seem to shake the smell of it, even at work.

The head came out excellent, better than I had hoped. The fins seemed a little bright, but they sure did stand out but heck, if yer gonna build the big guy, you Need those fins!